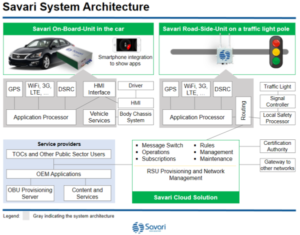 Savari notes that together, these automotive OEMs account for more than 30% of the USA market share and roughly 15% of the global market share for automotive sales in 2019. As a result, the company’s V2X software will be operating in roughly one in three cars domestically, and one in seven cars worldwide. Working alongside the broad automotive and telecommunications ecosystems, Savari expects its V2X, cellular-compatible technology to deliver numerous benefits to drivers and communities around the world, including greatly enhanced safety, higher levels of automated driving, lowered environmental impact, traffic efficiency and other benefits.

Savari’s V2X Software Stack is both radio technology and radio hardware vendor agnostic, supporting both Dedicated Short-Range Communications (DSRC) and Cellular-V2X (C-V2X) protocols and is integrated with the major chipset providers. The company’s V2X Software Stack is also POSIX-compliant and available on major operating systems including Linux and QNX. With a focus on smart cities V2X, Savari works closely with road and city authorities, and has developed applications that are broader in scope than many developers, encompassing infrastructure-to-phone and vehicle-to-phone applications, as well as Vehicle-to-Vehicle (V2V) and Vehicle-to-Infrastructure (V2I).

Savari has also announced that it has completed critical certification for its C-V2X equipment under the European Union’s (EU) Radio Emissions Directive (RED) testing for its MobiWAVE MW2000 onboard unit (OBU) and its StreetWAVE 2000 roadside unit (RSU) products. RED testing is required for deploying any radio-based device in Europe and requires passing stringent requirements for mission-mode transmission and reception. The technology must not interfere with other radio devices in both the spectral and physical vicinity or emit spurious radio transmissions.

In addition to acquiring this critical EU certification, Savari’s software is also compliant with the China Academy of Information and Communications Technology (CAICT); CEN, one of three European Standardization Organisations recognized by the EU; and the European Free Trade Association (EFTA), which is responsible for developing and defining voluntary standards in Europe. Savari was the first stack provider to have joined and supported the 5GAA (5G Automotive Association), an international organisation of companies from the automotive, technology, and telecommunications industries. Most recently, Savari’s MobiWAVE OBUs successfully completed ETSI C-V2X Plugtests, performed in partnership with 5GAA, which included road hazard signalling, road works warning, longitudinal collision risk warning and intersection collision risk warning.

“With over a decade of testing in real-world installations and global demonstrations, our V2X software delivers the broadest and most robust array of features of any V2X solution on the market,” said Ravi Puvvala, Savari’s CEO. Our partnership with two of the largest global automotive OEMs and one of the leading OEMs in Asia will bring the power of V2X to millions of drivers worldwide. Having obtained all of the critical certifications for quality and safety, both domestically, in Europe and Asia, we are poised to revolutionise the global automotive market, connecting drivers and their vehicles to roadside infrastructure and creating a safer, more efficient driving experience for all.”