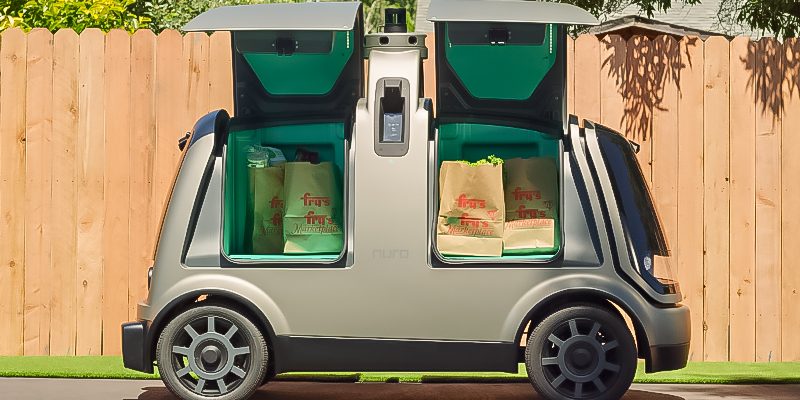 Dropping a side-view mirror may not sound like much.

Heck, if you drive in a major city like New York, Paris or London, side-view mirrors get dropped all the time, hit by delivery vans and overzealous cabbies, garbage trucks and pulled off by late-night pranksters. For the self-driving car industry, however, dropping a couple of side-view mirrors with the blessing of the US federal government is a very big deal indeed.

Last week Nuro became the first self-driving car company to receive a federal exemption for its autonomous vehicles. The exemption comes courtesy of the National Highway Traffic Safety Administration (NHTSA) and allows the outfit’s new R2 delivery bot to hit the streets without side-view mirrors or a rear-view windshield mirror. The vehicle also lacks a steering wheel and seats for a driver or passengers. In their place are two large storage compartments for delivering goods to nearby businesses, plus an impressive array of automated driving software, LiDAR, radar and cameras. The R2 is all-electric and operates with a top speed of 25mph.

That low speed was why the Nuro was able to receive the exemption, in addition to the fact that it won’t be ferrying human beings around city streets and because its vehicles are exclusively for delivery. In the past it has partnered with Kroger grocery stores to help deliver groceries to customers and has teamed up with Domino’s to deliver pizzas in Scottsdale, Arizona, and Houston, Texas. The latter of those two cities is where Nuro plans to deploy the R2 in pilot mode in the coming months before integrating it into its existing delivery fleets in multiple markets.

NHTSA’s exemption will last two years, during which time the company has to track its performance and report results to the government. Nuro can only deploy 5,000 R2s during that time. The exemption can be extended thereafter. The real question is whether other self-driving car companies will receive exemptions as well. General Motors, most notably, has applied for an exemption that would allow it to eliminate a steering wheel in its Cruise robo-taxis. A response is expected soon. If NHTSA grants Cruise an exemption, consider the floodgates open for the self-driving industry to conceive of and design their vehicles unencumbered by past regulatory frameworks.

Elaine Chao’s latest activities would suggest this will likely be the case. The US Secretary of Transportation made a splash at this year’s CES when she rolled out a new set of federal guidelines for self-driving cars known as AV 4.0. They make it clear that the US government wants to boost the self-driving industry however it can and is ready to entrust tech companies with the grave task of self-monitoring their own safety compliance — this from an industry with the likes of Tesla, whose Autopilot has led to well-documented accidents and deaths, and Uber, whose robo-taxi struck and killed a pedestrian in Arizona back in 2018.

Speaking of Uber, last week the ride-hailing giant decided that two years is a sufficient penalty to pay for that accident. The company plans to ramp back up public trials of its autonomous tech this year, starting in San Francisco imminently and proceeding to another former pilot ground in Washington, D.C., soon thereafter. As our Paul Myles details here, state governments seem perfectly willing to let them.