Self-Driving Ubers of the Future Will Deliver Stuff, Not People 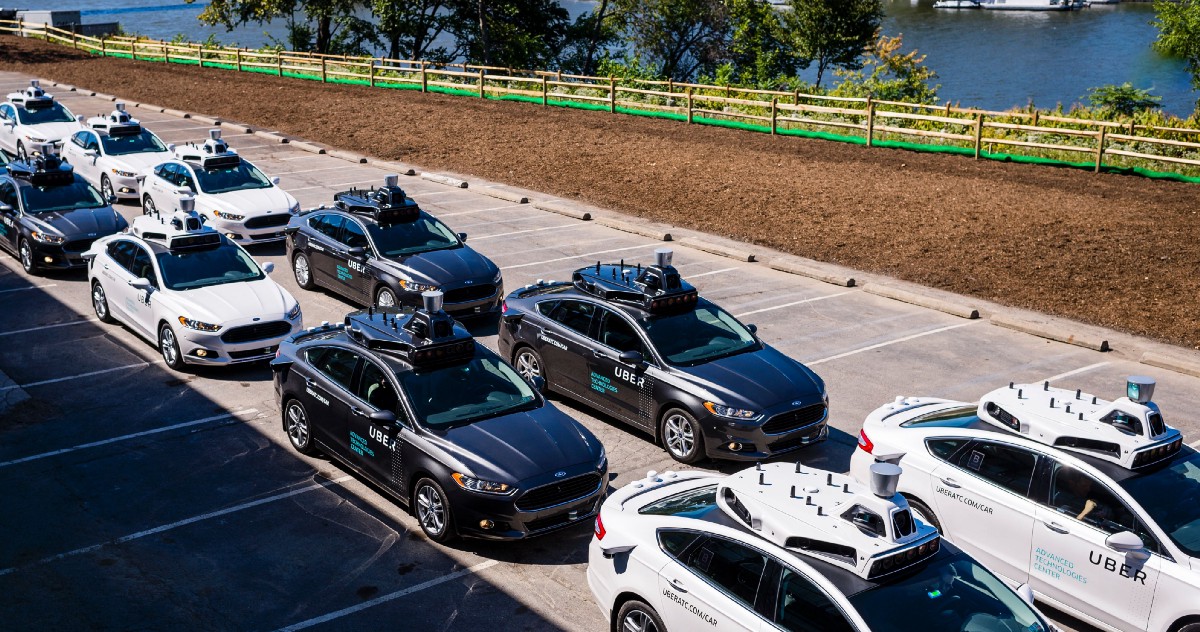 2020 was supposed to be the year that automated robotaxis took over the world. But instead of the year in which we can finally enjoy our robotaxi rides, this year has become the one in which much of the world’s economy ground to a halt because of an organism we can’t even see. Things are so bad that Uber is planning to lay off 14% of its staff (3,700 full-time employees) in the next week. In addition to killing hundreds of thousands of people and infecting millions, the coronavirus has also upended the plans to transform transportation.

Even before this virus emerged in late 2019, the reality of automated driving had already shifted significantly. The process of developing this technology has demonstrated yet again how much we don’t know when we start something like this. While the basics of making a vehicle start, move, and steer are reasonably well understood 13 years after the end of the DARPA Grand Challenge, doing it at a level where it is consistently safer and smoother than human drivers was not. Nobody was close to selling a truly driverless vehicle.

There are now a number of commercial robotaxi services operating around the world. These range from the fixed-route shuttles running in places like Ann Arbor’s University of Michigan campus to on-road microtransit like the service run in several cities by May Mobility to automated ride-hailing like Aptiv in Las Vegas and Waymo in suburban Phoenix. But regardless of the type of vehicles being used and where they operate, all these vehicles that carry passengers also have at least one safety operator on board. Waymo has done some driverless rides as part of its Early Rider beta, but that is a closed program, and riders don’t pay.

In mid-2019, Cruise, which is majority-owned by General Motors, delayed its plan to launch a commercial robotaxi service in San Francisco but did not announce a new date. At the reveal of the Cruise Origin robotaxi in January 2020, CTO Kyle Vogt acknowledged that these vehicles need superhuman levels of safety before they can be deployed.

But neither Cruise nor anyone else is in that superhuman territory yet, and the pandemic exploding around the world isn’t going to make getting there easier.

Barely three months after the Origin event, almost no one anywhere is using Lyft, Uber, taxis, shared scooters, or even public transit. Most of the world’s airliners have been grounded, with passenger traffic down by more than 90%.

Most of us hope that at some point in the next few months, we’ll be able to safely venture back out into the world. But when we do, what exactly will we do?

Essential workers are already out there, and soon many nonessential employees will be required to go back to their jobs or risk losing them and the crucial health insurance that goes with those jobs. How many of us will want to hop back on airliners packed to the walls with breathing, sweating, human bodies? How many of us will want to jump into a taxi or Uber seconds after some other unknown person, perhaps one not wearing a mask, gets out?

The pandemic has shifted how consumers view transportation, and shared mobility is looking far less appealing to many people than it did a few months ago. Developing automated vehicles not as taxis but as delivery bots seems more appealing than ever.

A new survey of 14,000 American consumers conducted by the IBM Institute for Business Value indicates a pretty dramatic shift in attitude toward transportation modes after barely a month of quarantine. One of the questions asked was “How do you expect your own personal usage of the following types of mobility options will change once the current COVID-19 restrictions are lifted?”

Of the responses, 47% said they would use their personal vehicles either more or exclusively. More than half said they would no longer use car-sharing services like Zipcar, and 50% plan to stop using ride-hailing apps like Uber and Lyft. In addition to economic concerns, riders are also wary about getting into unknown shared spaces without knowing when they were last sanitized.

This doesn’t bode well for the mobility services business, which was already struggling with trying to find a viable business model. In late 2019, ReachNow, the car-share and ride-hailing service jointly owned by Daimler and BMW, shut down its North American operations, and in late April, GM announced it would shutter its Maven business this spring. While GM had scaled back some of Maven’s operations in 2019, the automaker specifically cited the pandemic and the drop in business for closing it completely.

Various forms of car sharing have been around for more than two decades, and ride-hailing has been around for the past 10 years. All the companies that have entered the market have one thing in common — a lack of profitability despite significant growth. Now the growth potential also seems to be gone for the foreseeable future.

Back when Kalanick called automated vehicles an existential threat to Uber, many were projecting that taking the driver out of the vehicle would save enormous amounts of money, making such services instantly profitable. However, many of those projections failed to look very deeply at the real costs.

Today, services like Uber are asset-light businesses that rely on drivers to bring their own vehicles to the party. Uber doesn’t have to buy or build vehicles, clean or maintain them, or pay for fuel or insurance. It doesn’t have real estate infrastructure to manage fleets. Most of Uber’s costs are variable. If drivers aren’t out picking up passengers, it doesn’t cost Uber anything to have vehicles parked.

Shifting to a fleet of automated vehicles would require a dramatic shift to an asset-heavy model where Uber would suddenly have all of these considerable costs. If Uber persists in trying to develop its own automated driving system (something I’ve long advocated against), they also have those expenses. There is no guarantee they can achieve profitability with their own automated-vehicle fleet.

While Uber’s marketing and other expenses for its ride-hail business have gone down with the more than 75% reduction in rides, the UberEats business is thriving as are competitors like Instacart, Grubhub, and others. This is the new direction we can expect the automated driving business to pivot toward, accelerating a trend that began before the pandemic.

Both Waymo and Ford have done extensive testing with partners for goods delivery using their automated vehicles. Waymo has had partnerships with Avis, AutoNation, and Walmart in Arizona while Ford has been conducting a range of experiments with national and local businesses in Miami and elsewhere. During its Q1 2020 earnings call, Ford COO Jim Farley announced that the automaker was delaying the planned commercial launch of its automated vehicle services to 2022. The reason given was that the company would reevaluate some of its go-to-market strategy, which will almost certainly include more of a shift from ride-hailing to goods delivery.

The combined challenges of what will almost certainly be a protracted recovery from the current economic downturn and the technical issues still to be overcome with automated driving make goods delivery a sensible direction. With consumers now disinclined toward using shared mobility modes, the projected market is significantly smaller than what was being forecast in prior years.

Robotaxis are also going to be more expensive to operate than goods delivery vehicles and still require a lot of occupant safety equipment such as seat belts and airbags. A dedicated goods delivery vehicle could be a smaller machine like the Nuro R2 or something a bit larger that is effectively an Amazon locker on wheels that can make multiple deliveries on a single trip.

Riders in robotaxis will expect a certain degree of ride smoothness that may still be a challenge for engineers. As long as the ride isn’t too jerky, a package may be a little more tolerant of less than ideal driving behavior. A rolling delivery locker vehicle would also be easier to configure for contactless deliveries. Each locker could be equipped with an interior UV light for automatic disinfection after each delivery so people may be more amenable to using them in a post-pandemic world.

The latest Guidehouse Insights automated vehicle forecast report projects global deployments of highly automated vehicles won’t get past about 300,000 units until 2025 or later and really start to pick up in the latter part of the decade. Among those, cargo or goods delivery vehicles are expected to be a significant majority until at least 2027.

We’re already seeing how goods delivery can be used to remove some of the contact during the current pandemic. At the Mayo Clinic in Jacksonville, Florida, Navya automated shuttles operated by Beep are being used to deliver Covid-19 test samples from the drive-through screening area in the parking lot to the labs and also to move medical supplies around the campus. Beep is also using another Navya shuttle to deliver pizza to health care workers at the VA hospital in Orlando. In Sacramento, California, a pair of Nuro R2 delivery vehicles are doing similar tasks at a field hospital. Cruise is using some of its San Francisco fleet to deliver meals from a pair of local food banks to needy families in the area.

The robotaxi isn’t dead by any means. We’ll see continuing small-scale deployments in a variety of urban areas over the next several years as developers continue to mature the technology. Waymo isn’t going away anytime soon, and Cruise will likely launch a service sometime in 2021. Startups like Voyage and Zoox also have some interesting plans with Voyage focusing on areas like retirement communities and Zoox developing its own purpose-built robotaxi. But we’ll probably see almost every company in this sector turn more attention to getting stuff to people’s homes rather than getting those people out and about.