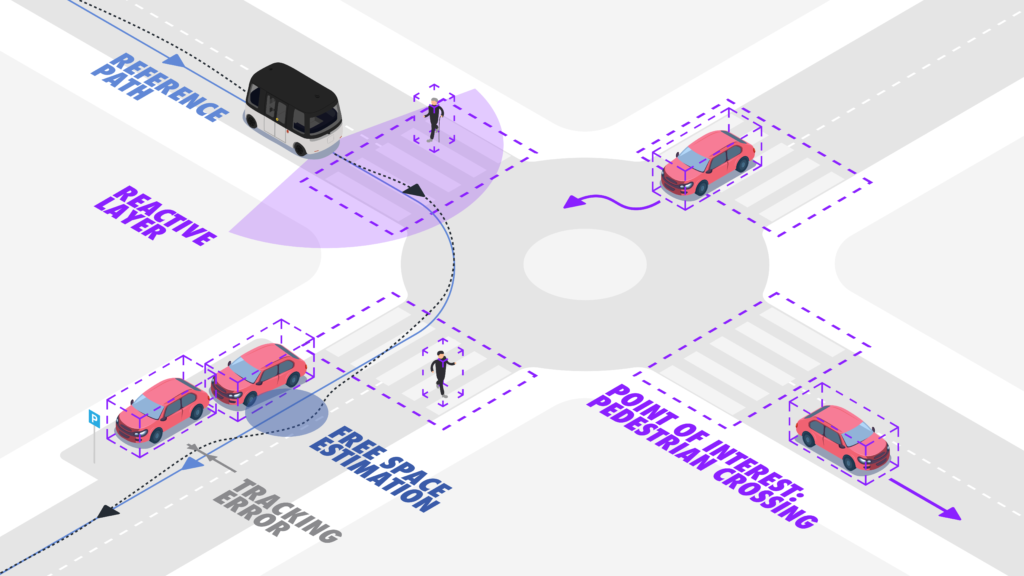 There are two systems in an autonomous vehicle that use a variety of sensors to scan the vehicle’s surroundings: the Positioning System and the Obstacle Detection and Tracking System (ODTS).

Although they provide the vehicle with information, these systems do not make driving-related decisions. The driving action is controlled by a component called Planning and Control, often shortened to simply Control. The primary function of planning is to use the information provided by the Positioning System to plan the best possible driving route. This planned route is then followed up by motion planning, which the Control system uses to drive along the route as accurately as possible.

Motion planning determines the driving speed, use of indicators, braking and steering for optimum comfort and safety. For instance, if the planned route takes the vehicle over a pedestrian crossing onto a roundabout and a pedestrian crosses the road as the vehicle approaches, the ODTS will identify the pedestrian and Control and Planning modifies the motion plan accordingly. The autonomous vehicle’s direction of travel would be unlikely to change in practicality, but the vehicle would slow down before the crossing to allow the pedestrian to cross.

In some situations, a change in route may be required along the way. For example, a parked vehicle may cover some of the driving line, prompting the system to calculate how much free space remains in the lane. If there is enough space, the autonomous vehicle will steer around the obstacle. If space is limited, however, and the vehicle needs to momentarily steer onto the opposite lane in order to clear the obstacle, the Remote Control Centre will intervene to help move the vehicle forward.

Independent driving of Sensible 4 vehicles is based on accurate mapping and a predetermined driving route. First a human drives the desired route, with the route saved and sensors scanning a 3D model of the surroundings. This model is then used to calculate a 3D map that can be used by the Positioning System.

This corrective work is called high-level trajectory planning. It takes the mapped route, calculates improvements and generates motion planning for it. This process results in optimal trajectory planning for the desired route. This optimal route is called a reference path, and the difference between the actual position of the vehicle and the planned reference path is called a tracking error.

From the perspective of a human driver, the reference path could be likened to exact driving directions that describe the correct route between two points down to the level of lane position. It should not be considered ironclad or rule out deviations though.

Wondering how our autonomous vehicles see the world? Planning and Control is the brain of the vehicle and this is how the data for our AV looks like. In the video, the vehicle replans its trajectory in the appearance of the previously unknown pedestrian. This feature of dynamic replanning is important to ensure the safe automated driving experience.

“Eliminating tracking errors is not the end goal in autonomous driving and control, but it’s important to be aware of the extent of the error,” says Umar Hamid, Planning and Control Team Leader at Sensible 4.

Numerous factors affect the vehicle software’s ability to follow the reference path. Vehicles differ in terms of dimensions, turn radius and maneuvering, all of which play a considerable role.

Winter driving and preventing road wear also contribute to route planning: if a shuttle bus drives the same route several times a day, some variation needs to be introduced to its driving lines. If not, the vehicle would repeatedly drive precisely the same route down to a few centimeters, with the wheels gradually wearing a groove in the road or making a wintery road perilously slippery.

Control is based on several considerations. The reference path and high-level motion planning establish a guideline, from which some deviation in various directions can occur.

Along with risk assessment, chassis control is another key aspect affecting driving. A vehicle is a machine with various motors and actuators that have some inherent imprecision, so they don’t always do exactly what they are told. Slippery roads can also cause a loss of traction and lead to wheels slipping.

For this reason, chassis behaviour is also monitored with sensors. The precise vehicle acceleration, wheel rotation speed and angle of the wheels that turn the vehicle must be known in order to have accurate chassis control. “Our positioning works very well, and this helps with control too,” states Umar.

Risk assessment and chassis sensor data are updated dozens of times per second, which results in local trajectory planning getting updated with the same frequency.

Along with safe and smooth driving, passenger comfort is also important. Unnecessary acceleration should be avoided, even if the vehicle is capable of speeding up and the travel time could be shortened. “Sadly, passenger comfort comes last all too often,” Umar points out.

In addition to motion planning, the autonomous vehicle has a simpler kind of safety technology. The sensors at the front of the vehicle measure free space in the immediate vicinity, and if they detect an obstacle in the direction of travel, they simply bring the vehicle to a stop.

This type of reactive layer is both simple and reliable, and it doesn’t influence motion planning or attempt to identify or classify obstacles.

The Positioning System determines a vehicle’s location and ODTS can be thought of as its “eyes”. In this analogy, Planning and Control is the brain, or the driver, of the vehicle. All three are necessary, along with remote operations, in order for autonomous vehicles to be taken to the roads and mingle safely with other traffic.