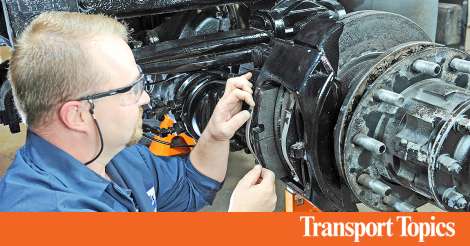 Such integration also is necessary to continue development of advanced driver assistance systems, or ADAS, which are the building blocks for autonomous driving and truck platooning technology, industry suppliers said.

On both of these intertwined fronts — brake monitoring for maintenance purposes and the development of ADAS — sensors play a crucial role, manufacturers said.

In the case of truck platooning, where two or more trucks travel together at close following distances, “you want to know what the brake health is on all the vehicles,” said Joe Kay, director of brake engineering at Meritor.

The overall objective is to inform a fleet operator how well the brake is functioning, Kay noted. Of 10 wheel ends on a tractor-trailer, one might not be working well, he said. Wear, temperature and stroke sensors can be used to detect the problem and communicate it.

Brian Marshall, vice president of research and development for Haldex, said that in developing ADAS, the challenge for manufacturers is trying to figure out how to “see” what’s in front of or around a vehicle “and plan accordingly, whether for brake actuation on automatic emergency braking or for autonomous vehicle development.”

Sensors such as cameras, radar and lidar — everything that can be used to detect an object, its speed and its vector— generate perceptions. The braking system technology can then respond to that information.

If rain is falling and technology can detect that the road surface is slick, for example, ADAS could respond by extending the following distance, Marshall said. “That has to be determined by an integrated approach where the brake system can openly communicate and provide data from the wheel end up to the controller.”

But ADAS and automated driving technologies still have a long way to go, said Brett Wacker, a longtime fleet maintenance executive who currently is working as a consultant.

“Sensing is a key component of the future of our industry,” he said. “In the absence of the human, you have to have the ability to know whether things are working or not working.”

“There’s a lot of talk about getting to Level 4 and Level 5,” said TJ Thomas, director of marketing and customer solutions for controls at Bendix Commercial Vehicle Systems.

But Level 1, edging into Level 2, is where ADAS for commercial vehicles stands at the moment, he said.

Bendix is working with truck manufacturers on enhancements and new features for its Wingman Fusion driver-assist product that are “enabled by the current level of technology — the current radars, the current cameras,” Thomas said. “As we learn more about them over time, we can enable new features.”

The modular braking platform can equip trucks with adaptive cruise control, including a feature called “Stop & Go,” Plenchette said. The feature enables a vehicle to “safely reduce speed down to [zero] mph when following another target and maintain [zero] mph until the vehicle detects that it is safe to increase speed once again,” Plenchette said via email, describing what could happen in a platooning scenario.

On trailers, brake pad sensors and axle monitoring sensors may be connected to a ZF anti-lock braking system, said Patrick Kealy, OEM trailer business leader for ZF in North America. The Intelligent Anti-Lock Braking System, or iABS, is designed to process information from sensors across the trailer. Kealy said that approach can limit costs to connect a trailer to fleet management systems. Further connectivity is possible with the addition of Wabco TrailerCast, a telematics device that taps into iABS and its associated sensors, Kealy said. The device broadcasts data via a 4G connection to a fleet’s existing management system, he said.

“We have a pad wear warning indicator, which sends a signal when the pad is fully worn,” said Bob Brazeau, Meritor’s senior director for air disc brakes in North America. The indicator “has a lot of benefit, on a disc brake particularly,” as it can prompt timely pad replacement and avoid damage to the rotor, he added.

Meritor also is working to add an indicator that will signal halfway or three-quarters of the way through pad life to enable fleets to better schedule maintenance, Brazeau said.

Bendix last year introduced pad wear sensing technology for air disc brakes on some trucks and some trailers. The sensing technology “determines when a pad is nearing its replacement period and provides a signal via telematics that fleets can use to proactively schedule maintenance,” the company said.

Bendix’s minimal thickness for pads is 2 millimeters, with pad wear sensing triggered when the pad is down to 3.5 mm. Notification at that point serves as a warning to the carrier, helps optimize use and “helps protect higher-dollar cost items like the rotor,” McComsey said.

The sensor acts like a fuse. A wire embedded in the sensor is mounted to each pad in the caliper. At 3.5 mm thickness, the heat generated will cut the wire in the sensor, McComsey explained. On a tractor, the cutting of the wire triggers a signal to an electronic control module wired to the chassis on the tractor. On a trailer, if the trailer is spec’d with a certain Bendix ABS, a signal is sent to that ABS.

“There, it generates a diagnostic code for worn pad condition and then that message can be sent through telematics back to the fleet,” McComsey said, or a technician can plug a device into the truck and download the code.

Marshall of Haldex described a constant quest to make pad-wear sensing more cost-effective for fleets to implement. Two choices for manufacturers are to “do more diagnostically with fewer sensors” or keep the number of sensors and “increase the type of diagnostics that can be generated to get more value.”

Meritor’s Kay said designing a system that reliably detects and indicates pad wear requires simple, durable sensors, along with software algorithms that are dependable, so that users aren’t asking, “Is there really a problem or is it a false alarm?”