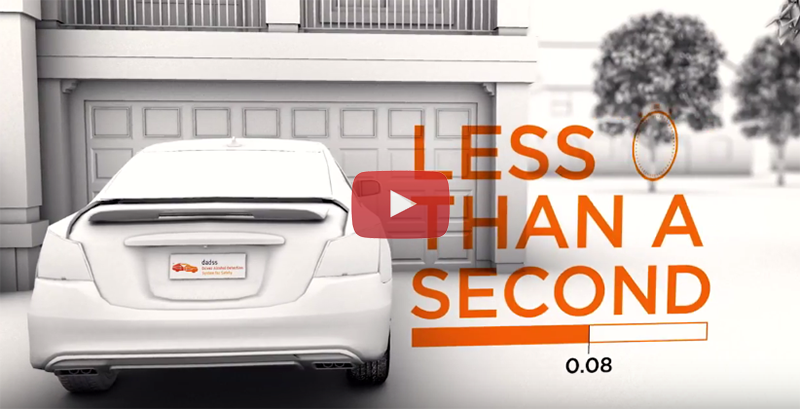 Secure the Future
DADSS
Driver Alcohol Detection System (DADSS)
Imagine a world without drunk driving…Ten thousand fewer families would get the call or visit from law enforcement letting them know their loved one isn’t coming home, hundreds of thousands of people would not be injured, families would remain together and intact, and our country would save $132 billion in costs each year.
Now, that world is possible.  A generation ago it would have sounded absurd that inflatable bags of air would help protect us in a car crash; now, every new car has them.  Today’s cars can parallel park themselves and have anti-theft sensors that can shut down the engine.  Tomorrow’s cars will protect our families from drunk driving by automatically determining whether or not the driver is above the legal limit of .08 BAC and failing to operate if the driver is impaired.

Moms and DADSS Keeping Families Safe
In 2006, MADD, the government, traffic safety advocates and members of the automotive industry created a panel to encourage and support the development of new technology that would stop drivers from operating a vehicle if drunk.  The result was DADSS or Driver Alcohol Detection System for Safety.  Together, MADD and DADSS are working toward a nation free from drunk driving.  These devices will be accurate, reliable and totally transparent to you and me. They would only come into play if someone tries to drive above a .08 BAC.
There are two technologies being studied,  one is a touch-based system that can read your blood alcohol concentration (BAC) through your fingertips and the other is an air-sampling system that can test and isolate just the air exhaled by the driver.  Both of these systems are well on their way to being tested in real vehicles.
Imagine being able to look at the car next to you and know that the driver is not drunk.  That peace of mind can be ours, with your support.
Driver Alcohol Detection System for Safety
Visit Driver Alcohol Detection System for Safety, from the Automotive Coalition for Traffic Safety and the National Highway Traffic Safety Administration, to learn more about emerging technologies to prevent drunk driving.
Autonomous Vehicles
Advanced Vehicle Technology
In 2006, MADD launched the Campaign to Eliminate Drunk Driving to literally eliminate drunk driving in America to create a future of No More Victims. Since then MADD has supported advanced vehicle technology, and in 2017, MADD formally added autonomous vehicles to the Campaign’s blueprint as the ultimate way to end drunk driving and other behavioral-related traffic deaths.
MADD strongly supports autonomous vehicle technology and hopes it will be available as soon and as safely as possible.
There are four key principles that MADD recommends as Congress and the Department of Transportation(DOT)/National Highway Traffic Safety Administration (NHTSA) address this issue:
Support federal regulatory framework. It doesn’t make sense for states to pass laws or regulate the safety of autonomous vehicles. It is important that the playing field be level and states should leave the self-driving car safety issues to the automotive safety experts at the federal level. To that end, it is critical that the Congress and/or DOT/NHTSA provide the necessary guidance and regulations to the autonomous vehicle community in order to allow a national roll-out of this technology. Emphasis must be placed on ensuring that the technology is safe, and that processes are followed to ensure that rigorous safety standards are followed, and that effective methods for educating the public on technologies are developed. We believe the DOT/NHTSA Autonomous Vehicle Policy issued in 2016 is a good beginning for providing safety guidance to those companies developing Highly Automated Vehicles.
Support existing state regulatory system. The state role in autonomous vehicles is to continue doing what they do for conventional vehicles today. This includes titling, registration, insurance requirements, etc. States should not regulate the safety of autonomous vehicles because they do not have the technical expertise to do so and their involvement could hinder the technological progress in the deployment of this life-saving technology.
Support for level four and five autonomous technologies. For MADD’s purposes, it is important that vehicles achieve level four and level five automation (i.e., vehicles that do not require a human driver in at least certain environments or under certain conditions). Drunk driving is arguably the biggest killer on our roadways. Alcohol and drug impairment have lasting effects, so it is imperative for maximum safety that the car be able to completely take control and remove the driver from driving.
Support for evaluating the technology as it evolves. The Autonomous Vehicle Policy includes provisions for recording and sharing information on system capabilities and data on events, incidents and crashes. These data can be used to enhance the safety benefits of the technology and should be standardized, anonymous, absent of propriety information, and made available not only to the federal government but also to states, researchers, and the public.
Autonomous vehicle technology can eliminate behavior-based traffic deaths, including drunk driving fatalities. MADD will continue to strongly support the safe development of this technology and work to build public acceptance for the adoption of autonomous vehicles.
MADD is a proud member of the Self-Driving Coalition for Safer Streets and has individual partnerships with Uber and Waymo.
Partners