Car Seats Protect Inside a Vehicle— But What About Outside? 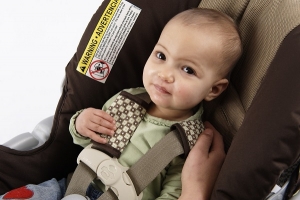 Car seats, swings, and bouncers are just a few of the items you are likely to find on expectant parents’ registry lists. Although these products are designed to keep children safe and/or entertained, unfortunately injuries and even fatalities can occur when they are used beyond their intended purposes. Recently published research in The Journal of Pediatrics sought to analyze the mechanisms of injury and death of children under the age of two attributed to sitting and carrying devices.

The study authors looked at reports of 47 deaths recorded by the U.S. Consumer Product Safety Commission between 2004 and 2008 that happened in car seats, bouncers, swings, strollers or slings. The vast majority of these deaths (31) occurred in car seats and resulted from strangulation from straps or asphyxiation. Here is a case example from the study:

“An 11-month-old boy was placed with a bottle in a car seat for a nap at a home day care center. He was covered with a fleece blanket. The chest buckles were secured, but the lower buckles were unsecured. One hour and 20 minutes later, the child care provider went into the room to check on the child. She saw that he had slipped down in his car seat, such that at least one strap was up against his neck, his color was pale, and he was gasping for breath. EMS was called and the victim was transported to a hospital, where he was declared dead.”

As the authors point out, an infant accurately and securely installed in a child restraint system (CRS) in a motor vehicle is at an extremely low risk of suffocation or strangulation from the harness straps. However, as the above example sadly illustrates, if parents or caregivers allow a CRS to be used improperly the implications can be extremely serious. According to the American Academy of Pediatrics’ 2011 policy statement on SIDS and other sleep-related infant deaths, sitting devices such as car safety seats, strollers, swings, infant car seats, and infant slings are not recommended for sleeping because of the potential for upper airway obstruction and oxygen desaturation. If a child falls asleep in one of these devices, he or she should be moved into a crib or other appropriate flat surface.

Similarly, in a 2011 Pediatrics study, researchers focused on characterizing car seat-related injuries to infants younger than 12 months. Nationally, an estimated 43,562 car-seat related injuries were treated in emergency departments from 2003 to 2007 that occurred outside of motor vehicle crashes. Of these, nearly 65% were caused by infants falling out of car seats, either the result of being carried or being placed on an elevated surface in their car seat; a little over 84% of the injuries sustained were to the head/neck.

These two studies illustrate the serious implications of the misuse of car seats outside of the vehicle. The most important take-aways for parents and caregivers are: 1) Just like inside of the vehicle, a child in an infant carrier should remain properly restrained when taken out of a vehicle (i.e. the harness straps should not be loosened or unbuckled) and 2) The carrier should only be placed on a flat, level surface and should never be placed on a bed, table, etc. The good news is that the risks of injuries and fatalities from the inappropriate use of car seats, bouncers, and other devices are relatively low. However, awareness is key so that these preventable injuries and deaths can be avoided.