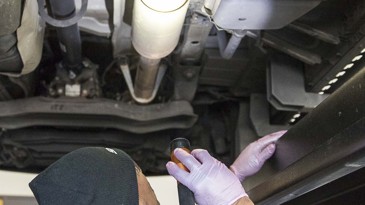 The defects, which led to manufacturer recalls, include water pumps that can leak coolant and prompt an engine fire, transmissions that can shift out of gear without a key in the ignition; and axles, sensors and welds that can fail, raising the likelihood of crashes and putting lives at risk.

The National Highway Traffic Safety Administration requires the manufacturers who issued the recalls to offer repairs and replacement parts for free.

“It’s crazy not to go ahead and get that taken care of,” said Ashley Andrews, a mechanic in east-central Georgia who services emergency and rescue vehicles for state and local governments. In Atlanta, “they drive ambulances harder and faster. It’s somebody’s life you’re trying to save in the back of that vehicle.”

But, records show, more than two dozen local ambulance providers had not had repairs made. In numerous instances, the recalls were issued years ago.

Even with simple repairs, agencies can be reluctant to schedule a shop visit that requires that their vehicles be taken out of service, owners acknowledged. The dread is that a tragedy, like a multi-car pileup, will hit on the same day, and there won’t be enough ambulances to cover urgent needs.

Some ambulance providers also said that the recall notifications they received do not make the repairs mandatory.

“None of the recalls include advisements that the vehicles should be taken out of service or that the vehicles are unsafe to operate,” Gwinnett County officials said in response to questions from The Atlanta Journal-Constitution. A total of 55 open recalls popped up for Gwinnett, which has a fleet of 45 ambulances, all Dodge Ram vehicles, records show.

It is rare for manufacturers to direct owners to ground their vehicles as a result of a safety recall. And no law requires ambulance operators to make the repairs before continuing to run emergency calls. In fact, the federal law that requires manufacturers to make repairs on open recalls doesn’t cover many of the very large ambulances that providers may use.

However, several mechanics who work for private ambulance providers or for government agencies say every recall is a serious matter.

“Something like that is extremely important,” Andrews said. “I would immediately as soon as I saw the letter take in that vehicle the next day.

“They wouldn’t have a recall and spend millions of dollars on free repairs if they felt it wasn’t important for them to recall that vehicle.”

“You don’t want a recalled ambulance picking you up,’’ said Jason Levine, executive director for the Center for Auto Safety in Washington, D.C., which has pushed to have safety recall information be available to the public. “You want something that’s been in prime condition and maintained.”

Even with defects that appear less serious, experts told the AJC, manufacturers will emphasize a sense of urgency in having repairs completed. One example is a summer safety recall over the manual seat recliner on dozens of Ford F series Super Duty trucks used as ambulances in parts of the metro Atlanta area.

In its notification to owners, Ford explains that the recliners do not provide adequate strength because they may be missing a part. In a collision, the lack of support could increase the risk of injury to occupants, the recall notice states.

It’s hard to tell if any parts-related defects contributed to crashes here. In the first nine months of the year, Georgia had more than 430 reported accidents involving ambulances, but many were blamed on driving mistakes such as improper lane change, distracted drivers and failure to yield.

To identify ambulances with incomplete repairs, the AJC filed an Open Records Act request with the Georgia Department of Public Health to obtain a list of roughly 870 ground ambulances with active licenses in the metro Atlanta area, along with their Vehicle Identification Number, status and ownership. The paper then compared the VINs with information on the recall safety website provided by automakers and supported by NHTSA.

That showed more than 270 open recalls on unrepaired vehicles. The AJC then reviewed a list of the recalled items with safety experts and with mechanics who serve ambulance fleets in Georgia. They identified defects that may be the most serious.

The AJC gave each ambulance service a spreadsheet with the findings and asked each to verify the status of their vehicles and explain why repairs had apparently not been made.

Grady Emergency Medical Services, the exclusive provider for the city of Atlanta, was shown as having 111 open recalls, with many vehicles having multiple ones, according to the NHTSA website.

A Conyers provider that transports patients between dialysis centers had open recalls that were a decade old.

In Gwinnett, the majority of its fleet of Dodge ambulances showed open recalls, some dating years back.

One week after the AJC provided providers with their list of unrepaired vehicles, several said some of their vehicles were in the shop at the time undergoing repairs. Other vehicles, they said, had been retired.

Gwinnett said that many of the recalls had been closed, including repairs to several Dodge Ram models with defective water pumps that the manufacture warned two years ago could trigger a fire in the engine compartment and cause the vehicle to crash without warning. Records provided by the county showed more than a dozen diesel water pumps were replaced in-house by Gwinnett County Support Services.

Gwinnett spokeswoman Heather Sawyer said the repairs were done “at our expense in order to expedite getting the ambulances back on the road as quickly as possible.”

The county didn’t report them to the recall safety website, she said. Information on repair dates was not readily available, but she said at least some of the repairs were done in the last few months.

The Conyers provider, Care Techs Medical, did not respond to calls and requests for comment.

After the AJC provided Grady with the spreadsheet, repairs were made to 17 ambulances, some of them in-house. As of Thursday, Grady reported that another 29 ambulances were “in progress” of having the problems addressed. Among them was a 2014 Dodge with four open recalls and several ambulances with three open recalls.

About a dozen other ambulances with recalls were out of service, according to data that Grady provided.

Contrary to what the recall website shows, repairs were made on nine other ambulances earlier this year, Grady reported. “The list of vehicles from the NTSB site that you sent is not an updated list,’’ Grady administrators wrote. “I am told that the list is updated when manufacturers submit recall repair information, and that the manufacturer depends on dealerships to send them the data.”

The law requires that the vehicle safety recall information be updated at least once every seven calendar days. Manufacturers use a secure portal to transmit information, and dealers provide updates as soon as the repaired vehicles drive out of the shop, mechanics and auto safety advocates told the AJC.

Among the state’s largest providers, Knoxville-based Priority Ambulance had the fewest number of recalls. On a fleet of more than 140 vehicles, only 10 were still open. The company owns Central, National and Puckett emergency medical services.

Other larger providers with only a handful of open recalls included Metro Atlanta Ambulance Services and the Colorado-based American Medical Response. Some of the recalls that hadn’t been addressed were just issued this year, records show.

Not all open recalls reviewed by the AJC were a signal to the public that an ambulance provider had failed in its responsibility to assure safety to patients and emergency medical crews who ride in their vehicles.

The AJC found a number of vehicles for which the manufacturer had no remedy.

Daimler, owner of Mercedes-Benz, announced in 2016 that defective Takata air bags could endanger the lives of vehicle occupants. Reportedly, propellant wafers in some of the inflators could degrade over time and cause an explosion when the airbag is activated, triggering metal fragments to pass through the air bag and inside the vehicle, causing injuries or death.

The company has yet to supply passenger-side air bag remedy kits for thousands of its Sprinters across the country, including dozens of ambulances owned by metro Atlanta operators.

“I asked them if I could get one in tomorrow, and they told me that I wouldn’t be able to bring in the vehicle for two months,’’ said Pete Quinones, president and CEO of Metro Atlanta Ambulance Services in Marietta. “The parts aren’t readily available.”

Mercedes-Benz has only completed repairs on about one-third of the defective models, which include personal vehicles, Levine said.

“It’s unconscionable for any manufacturer to drag its feet while they’re talking about exploding airbags injuring and potentially killing occupants,” he said.

Donna Boland, spokeswoman for Mercedes-Benz in Atlanta, did not respond to emails and phone calls seeking comment.

Mechanics say they understand why ambulance providers are hesitant to ground their vehicles. But, they say, it’s not worth the cost of an accident that takes a life.

They also note that it is in ambulance providers self-interest to get recalled vehicles repaired.

“If the family of a patient who was killed as a result of one of those safety recalls finds out that the repair hasn’t been done on that vehicle, think of what a field day that patient’s lawyer is going to have,” Andrews said.

“Grounding an ambulance wouldn’t cost a penny compared to the several hundreds of millions of dollars that would have to be paid to settle a lawsuit, and the agony to the family and the patient whose death you caused, all because of not taking the time to get that recall done,” Andrews said.

Your subscription to the Atlanta Journal-Constitution funds in-depth reporting and investigations that keep you informed. Thank you for supporting real journalism.