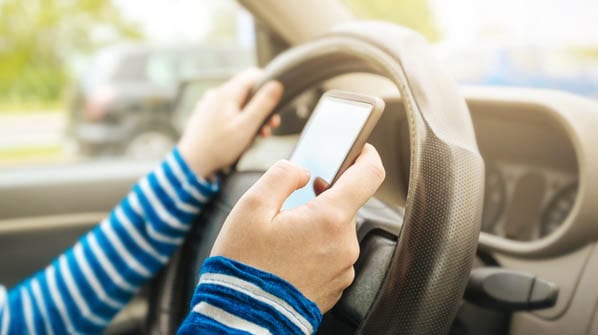 This Distracted Driving Awareness Month, education and awareness campaigns aimed at keeping drivers’ eyes on the road and their minds focused on driving are in full swing.  Advocates for Highway and Auto Safety (Advocates) supports these efforts, but they must be combined with proven countermeasures to curtail this deadly scourge on our roadways.  With car owners keeping their vehicles for an average of 12 years, lifesaving crash avoidance technology being bundled in luxury packages above the price point many car buyers can afford, social distancing causing more dependence on devices and a number of states lacking comprehensive laws to stop device use behind the wheel, Advocates calls for a swift course correction to advance known solutions.

According to the National Highway Traffic Safety Administration (NHTSA), in 2018 nearly 3,000 people were killed in crashes involving a distracted driver, accounting for eight percent of all traffic fatalities, and an estimated 400,000 more were injured.  Of the fatalities, 506 involved nonoccupants including pedestrians and pedalcyclists, which is particularly concerning considering that these fatalities have been rising at a relatively steady rate since 2009.  Crashes in which at least one driver was identified as being distracted imposed an economic cost of $40 billion in 2010, the latest year for which this data is available.  Moreover, the true impact of distracted driving is not fully understood due to issues with the underreporting of these types of crashes.

Advocates has consistently pressed the U.S. Department of Transportation (DOT) and Congress to require proven and available Advanced Driver Assistance Systems (ADAS) in all new vehicles, subject to minimum performance standards.  Features like automatic emergency braking, lane departure warning and blind spot warning can prevent and mitigate crashes caused by distraction and other dangerous behaviors such as impairment, speeding and fatigue.  The National Transportation Safety Board (NTSB) has repeatedly included accelerating the implementation of collision avoidance technology in new vehicles on its “Most Wanted List” of transportation safety improvements.  Advocates commends the U.S. House of Representatives for including ADAS requirements and other crucial safety upgrades in the Moving Forward Act (H.R. 2), passed on July 1, and the sponsors of the Stay Aware For Everyone Act of 2020 (SAFE Act of 2020, S. 4123) which would harness technology to overcome driver distraction and automation complacency.

Advocates also supports the enactment of optimal state laws including primary enforcement all-driver text messaging restrictions and constraints on cell phone use by novice drivers.  Yet, 20 states are missing one or both of these laws.  With the emergence of single swipe and voice-activated access to video chatting, games, social media, video streaming, recording and broadcasting, and distracting “apps” on devices, state lawmakers should prioritize enhancing laws to ensure that these newer uses do not distract from the driving task.  A poll commissioned by Advocates in January finds strong public support for state laws to prohibit distracted driving and incentive grants for states to improve their current distracted driving laws.  The bipartisan States Afforded Funding Extensions To Oppose Driving Recklessly in Vehicular Engagements Act (SAFE TO DRIVE Act, H.R. 2416) would require necessary enhancements to the distracted driving grant program, and we urge Congress to enact it.

Due to the COVID-19 pandemic, Distracted Driving Awareness Month was rescheduled this year from April to October.  In those intervening months our roadways have become raceways with a dramatic rise in speeding and dangerous driving, despite a large decline in traffic volume.  In fact, early estimates for the first six months of 2020 show the fatality rate increased by 18 percent compared to the same period last year.  This disturbing development should bring into focus the urgent need to embrace a robust strategy to combat distracted driving and other causes of motor vehicle crashes.  Campaigns intended to raise awareness and change behavior are one aspect of a comprehensive approach but requiring verified vehicle safety technology and advancing comprehensive traffic safety laws will make our roadways safer for all.