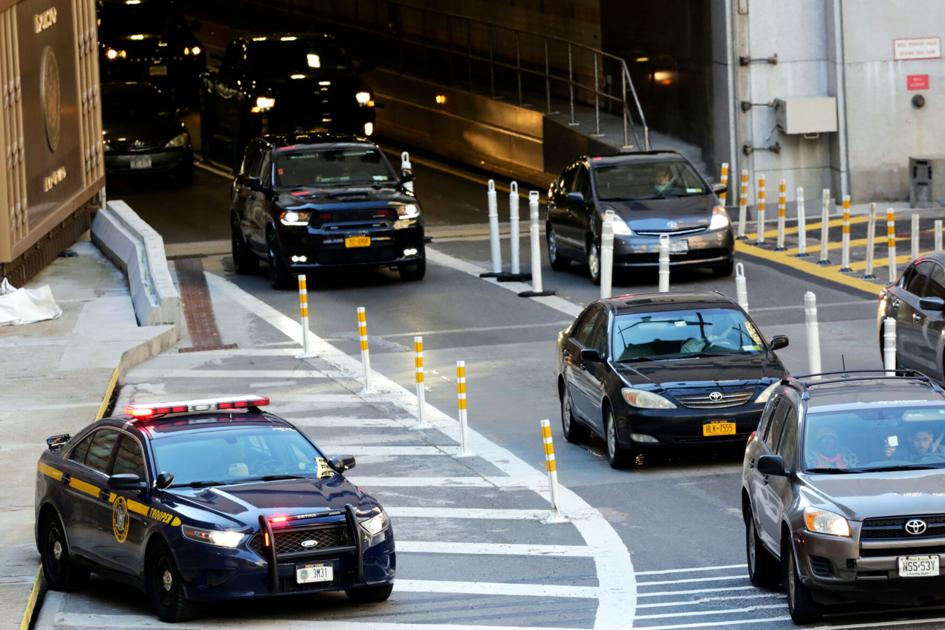 2020 seat belt law helped boost New York from ‘yellow’ to ‘green’ rating in highway safety report
A New York state police car is staged at the Hugh Carey Tunnel, Thursday, Oct. 25, 2018, in New York.
Mark Lennihan / AP photo
Save
(The Center Square) – Following the passage of Senate Bill 4336/Assembly Bill 6163 in 2020, New York received “green,” the highest rating, in the 18th annual Roadmap of State Highway Safety Laws report , which Advocates for Highway and Auto Safety released this month.
The law extends the mandate that all vehicle passengers 16 and older wear a seat belt from solely applying to front seat passengers to applying to all passengers.
“We were thrilled to be a part of the diverse and large coalition that helped to get the seat belt upgrade over the finish line,” said Tara Gill, Advocates’ senior director advocacy and state legislation. “It had been many sessions and many years in the making, and this is one of the primary traffic safety bills that we recommend. It helped New York go from the yellow to the green category, which is fantastic.”
Gov. Andrew Cuomo signed the seat belt law in August 2020. Versions of the bill date back to the 2002 legislative session.
This legislative session, New York lawmakers are also considering lowering the blood alcohol content (BAC) levels allowed by law while driving to 0.05 ( S131 ), expanding use of speed cameras in a school speed zone of New York City ( FURIOUS Act ), and requiring children younger than 13 to sit buckled in a rear seat ( S440/A1086 ).
“New York is a great example of a state that continues to make iterative progress to update and improve its traffic safety laws,” Gill said. “We look forward to continuing to work with state lawmakers to do so.”
Advocates also urges New York to postpone issuing unrestricted licenses until age 18, prohibit cell phone use in the graduated drivers licensing program except in case of emergencies and require children to use a booster seat until they are 8 years old and 57 inches tall.
In 2019, New York suffered 881 fatal crashes, in which 938 people were killed, according to Institute for Traffic Safety Management and Research reports . Fatal crashes most frequently occurred between 3 p.m. and 6 p.m. (146 crashes), followed by 6 p.m. to 9 p.m. (136 crashes) and 9 p.m. to midnight (134 crashes). The state experienced the most fatal crashes in July (100), September (92) and August (90).
The most common contributing factors involved in fatal crashes, according to police reports, were unsafe speed (230), pedestrian or bicyclist confusion or error (158), and passing, lane changing or improper lane use (129). Drivers being inattentive or distracted was the most reported contributing factor to crashes involving personal injury (29,999 out of 121,068 crashes).
New York is among eight states, including Delaware, Rhode Island and Maine, that have a green rating in the report. Thirty states have a yellow rating, “indicating that improvement is needed because of gaps in Advocates’ recommended optimal laws,” and 12 states, including New Hampshire and Vermont, have a red rating, as they “fall dangerously behind” in adopting Advocates’ recommendations.