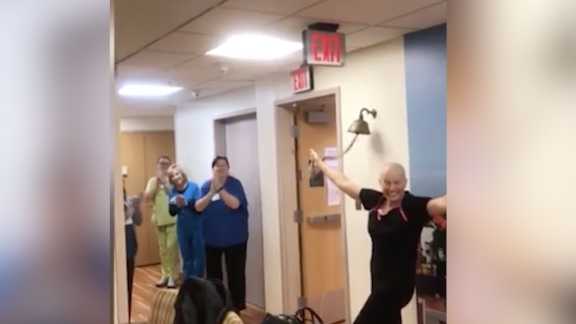 Patients going through cancer treatment will tell you it's difficult. It's emotionally and physically exhausting, and it's hard to imagine what it would be like to do it during COVID-19.
Advertisement

When it comes to the significant moments in Carly Dent's life, ringing the bell to mark the end of chemotherapy is one one them.

"It was hard. It was really hard. Just the physical toll that it takes on your body was really difficult. Not to mention losing your hair and everything that goes along with that," she said.

Ringing the bell wasn't the end of her cancer treatments. Instead of radiation, she had proton therapy, which is a safer long-term option for her.

"Since it was on the left side, in order to radiate to get that area, we'd have to go through my heart and have that radiated," Dent said.

It was the right treatment at a challenging time.

"Then a week before I was supposed to be done, stuff came through in the hospital -- pretty much went on lockdown," Dent said.

That meant Dent would be going through treatment on her own. She said she got through it by getting ready to ring the bell again.

"The whole two months I was looking at it, like, there's light at the end of the tunnel, like, this is going to happen here taking away like really devastating," Dent said.

Because ringing the bell a second time with her family present was so important for Dent, the staff found a way to do it by bringing a bell outside. She rang it 33 times -- one for each of her treatments at the center.

"It was definitely emotional seeing the emotions on Carly's face. She went alone most times, so my first time going was actually that last day," said Dent's husband, Brian Dent.

"I really wanted my husband, my son to really be able to witness that and be there with me as we finished up this intense journey," Dent said.

The journey now is returning to a life that's far from normal. The Dents are staying at home, but enjoying every moment of it.