Should Drivers of SUVs and Pickups Pay More for Parking? 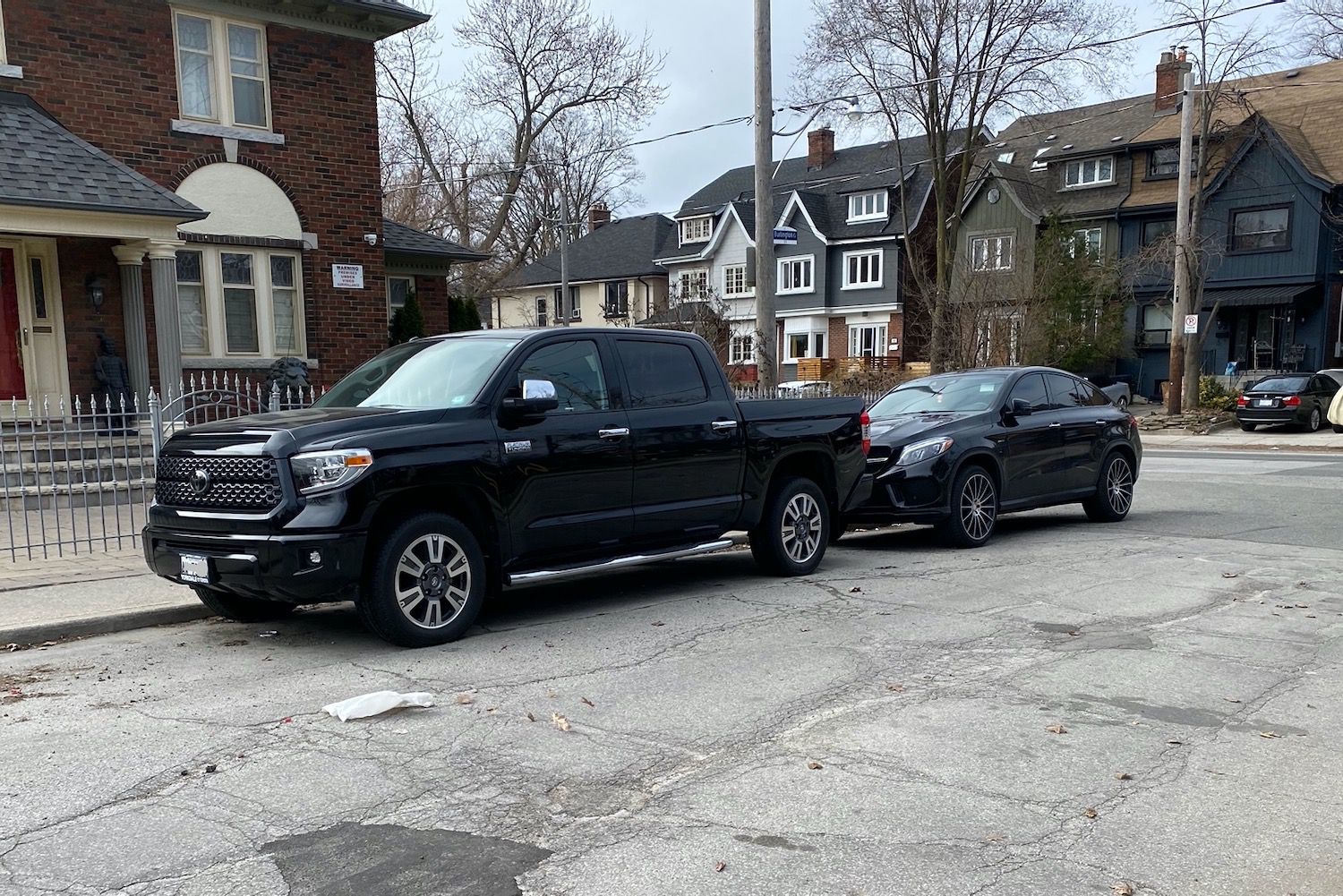 Every time I pass a neighbor's house I am bemused by the fleet of three vehicles, all giant black things polished to a beautiful shine. There's a pickup, and a Mercedes behind it that is a giant pumped-up jellybean of an SUV, and usually another Mercedes in the driveway. It always struck me that you could park three normal cars in the same space and that they should probably have to pay more for their street parking permit.

Meanwhile, in Berlin, they are considering exactly that, charging more to park SUVs. A LOT more. Vancouver planner Sandy James says it's in reaction to a crash last year where the driver of a Porsche Macan killed four people who were walking on a sidewalk. (Treehugger coverage here.) At the time, the District Mayor said "'tank-like SUV cars' don't belong in the city, as every driving error puts the lives of innocent people at risk. These [cars] are also climate killers. They are a threat even without an accident."

By North American standards, the Macan isn't even a big SUV, and it got a "good" rating in the Euro NCAP pedestrian safety standards, which do not exist in North America. But in Europe, it's huge by comparison to what most people drive. So the Green Party's State Working Group on Mobility has passed a resolution that "the fee for a resident parking permit should also be based on the size and weight of the vehicle."

It seems that the fee is exponential rather than linear; they are proposing 500 euros per year for the SUV, compared to 80 euros for a small car. Others complain that this isn't fair, that not everyone who drives a big car can afford this. The SUV owners were not best pleased, and complain(through a Google translation of Der Tagesspiegel):

A "traffic expert" also complains that "these are moon prices" and “we have to improve the public transport offer and not try to force people to give up their cars.”

In fact, charging more for bigger cars makes perfect sense. The fee is basically a ground rent, and if you take up more space you should pay more rent, just like you do in houses or offices or storage lockers. If light trucks take up more space then the city gets less revenue from public parking.

The private parking operators are not sitting around, and have started charging more for bigger vehicles. According to USA Today,

The standard spot in most of North America is 8-1/2 feet, and according to the Detroit Free Press, it's not going to change, "because zoning regulations typically require retailers to preserve the same number of stalls."

In much of suburban North America where parking is free, there really is no reason to worry about how much real estate their vehicle occupies. Most people don't pay for parking permits. But everybody suffers in the parking lot; the SUV driver has trouble parking, and even the drivers of small cars have trouble opening their doors and backing out of spots because of visibility issues.

There are so many costs imposed on society by SUVs and pickups, from the increased deaths of pedestrians to the decreased space. If only there was some way to make their owners pay for this.