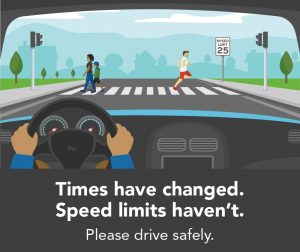 Our first post focuses on the need toDECREASE VEHICLE SPEED.

Speeding is a huge public safety issue: the Governor’s Highway Safety Association Report “Speeding Away from Zero” released in 2019 shared that 28% of fatal crashes in 2017 in MA were speeding-related. Higher speed, regardless of limit, is a factor in every traffic fatality or serious crash: there is less reaction time for a person driving to brake or avoid a crash, and a fast moving vehicle inflicts higher blunt force trauma on crash victims.

Road design plays a major role in how fast someone decides to drive. Picture a multi-lane highway with a center barrier and breakdown lanes. These features indicate that higher speeds are not only allowed, but expected.Now picture a street with one lane in each direction through a downtown business district with crosswalks, trees, benches, and bike lanes. Even before seeing a speed limit sign, the context tells the person driving to proceed more cautiously and to anticipate people walking and biking in the area. That is a well functioning Complete Streetin action. In Massachusetts, more communities each year are adding raised crosswalks, speed humps, and small-scale neighborhood traffic circles to help make streets safer for all users, and reduce the possibility of high speed injury crashes.

Our Executive Director, Stacey Beuttell talked to Streetsblog MASS (“MassDOT Begins Reexamining Deadly Speed Limit Policies”) earlier this year about the importance of streets with context-specific speeds:“We often hear from residents and advocates that want to lower speed limits, and they ask us, ‘what’s the process?’ And we tell them, ‘honestly, if you do a speed study, they may actually raise the speed limit,’” said Beuttell. “Speed studies rule the day, and they shouldn’t. It should be context-specific. If there’s a school, or heavy foot traffic, or seniors living nearby, all that should be taken into consideration.”

To support communities who have been seeing dangerously high traffic speeds and unsafe driving behavior during the safer-at-home advisory in Massachusetts, WalkBoston partnered with the Massachusetts Department of Public Health Mass in Motion (MiM) Program and MORE Advertising to developsocial media campaign graphicsthat MiM coordinators can use to raise awareness about safer pandemic driving behavior.

Another proven way to deter speeding is through speed camera enforcement. This tool is not yet permitted for use in Massachusetts.WalkBoston, Livable Streets Alliance, and Transportation for Massachusetts testified last October on behalf of the MA Vision Zero Coalition on S.1376 “An Act Relative to Automated Enforcement”in front of the Joint Committee on Public Safety and Homeland Security. When employed properly, automated enforcement has been shown to effectively reduce unsafe driving behavior, the number of crashes, and the severity of crash-related injuries. Automated enforcement is used in 29 other states.