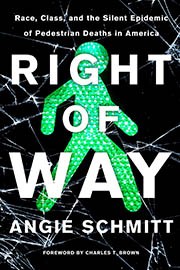 Should safety standards for new vehicles take into account the safety only of the inside passengers, or also the safety of others on the streets?

Right of Way, by Angie Schmitt, published by Island Press

When economic circumstances force large numbers of people who can’t afford cars to move into suburbs, should traffic policy on suburban streets still prioritize the unimpeded movement of the car owners?

These are some of the life-and-death questions explored in Angie Schmitt’s essential new book Right of Way: Race, Class, and the Silent Epidemic of Pedestrian Deaths in America (Island Press, August 2020). Although the focus is on the US, Schmitt also explains how and why other industrial countries have achieved far better safety records on urban streets.‡

Schmitt begins by outlining a sudden and rapid increase in traffic violence. Since 2009, Schmitt notes, there has been a 10% increase in total driving miles by Americans – but a 50% increase in pedestrian deaths. (Right of Way, page 7)

The reasons for the rise in fatalities are complex but there are obvious clues:

Unravelling what she calls an epidemic, Schmitt visits cities around the country and explores issues of mobility justice, racial justice, economic justice and environmental justice. While most of the book deals with events of the past 30 years, she does look at key developments from a hundred years ago.

Victim-blaming and the invention of jaywalking

“In the United Kingdom,” Schmitt writes, “there is no equivalent violation to jaywalking, but the pedestrian safety record there puts the US data to shame.” (Right of Way, page 67)

Defining and prosecuting an offense called “jaywalking”, as it turns out, is not a way to protect the safety of pedestrians, but rather a way to turn street space into the privileged domain of dangerous vehicles and their drivers.

For nearly all of history, people simply crossed the road when they wanted to get to the other side. Now, however, they are expected to walk down the road, wait for permission from a traffic light, scurry across, and then walk back to their destination; they face the risk of summary execution by car if they simply cross the road when and where they’d prefer.

How did this come about? Schmitt draws on the work of historian Peter Norton (see Fighting Traffic: The Dawn of the Motor Age in the American City). During the 1920s – an era when car ownership was still relatively rare – about 200,000 Americans lost their lives to cars, and the victims were disproportionately children.

“In contrast to modern media accounts,” Schmitt writes, “the news at the time was unflinching about where to lay the blame: on drivers.” (Right of Way, page 69) Cities across the nation began to discuss serious restrictions or even bans on the passage of cars through city streets. The dominance of car culture was in doubt, and the response was a combination of political muscle by the largest industries, plus a concerted public relations campaign. The path to progress, the car companies and their spin doctors insisted, was not to restrict the movement of cars but to restrict the rights of walkers to safely cross the streets.

“One of motordom’s most critical victories was the introduction and eventual acceptance of the concept of jaywalking,” Schmitt writes. (Right of Way, page 70) She goes on to illustrate how, 100 years later, “the ideology of flow” continues to kill people, especially in economically disadvantaged and radicalized communities.

Take, for example, the important issue of installing signalized crosswalks that might give pedestrians a margin of safety at the cost of some inconvenience to drivers. The Manual on Uniform Traffic Control Devices, Schmitt writes,

A recent intensifying factor is the “suburbanization of poverty.” In the post-WWII era a road-building boom promoted “white flight” from US urban centers to suburbs where nearly everyone relied on cars. But in the last generation the trend has reversed. Many urban areas have gentrified and poorer residents – disproportionately black, latino and indigenous – have had to find cheaper housing in the suburbs. For example, Schmitt writes that in 1980 just 47 percent of Atlanta’s black population lived in the suburbs, but in 2010 the figure was 87 percent.

High-speed suburban arterial roads are especially deadly for people who must walk to work, walk to the grocery store, or walk to catch a bus. They are deadly for elderly people who have difficulty crossing several wide traffic lanes in the time allowed by signals programmed to minimize interruption to drivers. And these roads are especially deadly today, with a majority of new passenger vehicles that are far more dangerous to pedestrians than the cars of just 20 years ago.

Most environmentalists would agree that fossil fuel executives rank high on the corporate villainy scale, due to their role in sowing climate change confusion while their own scientists were secretly documenting the devastating effects of carbon emissions. But auto company executives deserve their own special place in hell. Not only did they respond to the climate crisis with a decades-long push to sell ever bigger, heavier, and therefore less fuel-efficient passenger vehicles, but they did so even as the evidence mounted that their products are far more dangerous to pedestrians.

Ah, but think of the profit margin! Schmitt cites a Kelley Blue Book analysis: while even a small crossover SUV in 2017 sold for almost $9,000 more than an average midsized sedan, the production costs are almost the same. You can guess which kind of vehicle the auto industry is eager to sell.

In recent years the US auto industry has been the biggest buyer of advertising – more than $30 billion annually – and Schmitt reports that nine of the top ten advertised vehicles were SUVs or pick-ups.

The ad campaigns worked. While 83 percent of vehicles sold in the US in 2012 were sedans, Schmitt writes, by 2018 crossover SUVs had become the top-selling vehicle type.

As the sales of SUVs climbed, so did the pedestrian deaths. In the period 2010 to 2015, the odds of a pedestrian dying when hit by a vehicle jumped 29 percent.

Was this deadly trend just an unfortunate co-incidence? Not according to the National Highway Traffic Safety Administration (NHTSA); they estimated that “pedestrians struck by an SUV are two to three times more likely to be killed than those struck by a car.” (Right of Way, page 84)

The trend was also seen as causation, not mere correlation, by European lawmakers.

Schmitt writes that since 2004, the United Nations has recommended the imposition of “standards on automakers specifically to protect people outside the vehicles: pedestrians or cyclists.” In response, “the European Union imposed rules to protect pedestrians beginning in 2010.” (Right of Way, page 90)

These rules are already improving pedestrian safety in more advanced countries. In contrast to the high walls of steel at the front end of American SUVs and pickups, new European cars earning the best safety ratings have “active hood systems” which cushion the blow in a collision with a pedestrian. The result, Schmitt reports, is that pedestrians are 35 percent more likely to survive a collision.

Auto design, though, is just one aspect of traffic safety, and not necessarily the most important. Limiting speed is critical, since the force imparted in a collision increases non-linearly – doubling the speed quadruples the kinetic energy. Lowering vehicle speeds where pedestrians are present is thus an obvious response, if we are to believe that pedestrian lives matter.

Many cities are now lowering speed limits, especially in residential areas, and introducing other traffic calming measures. And while many tech boosters believe that autonomous vehicles will someday deliver us from traffic violence, there is already technology that can ensure that posted speed limits are effective:

A transportation revolution must clearly be a big component of a Green New Deal. For anyone interested in exploring the many aspects of mobility justice, Right of Way is a must-read.

‡Schmitt writes that “On a population-adjusted basis, Canada, for example, loses less than half as many people on the roads every year as the United States” – which may be explained by the fact that the transit ridership share in Canada is about twice that of the US. But many issues in the book – the suburbanization of poverty, the recent predominance of high-front-end SUVs and pick-ups, the traffic policies reflected in high-speed suburban arterial roads – apply equally in Canada.