Blame the Transportation System, Not the Pedestrian | Salud America 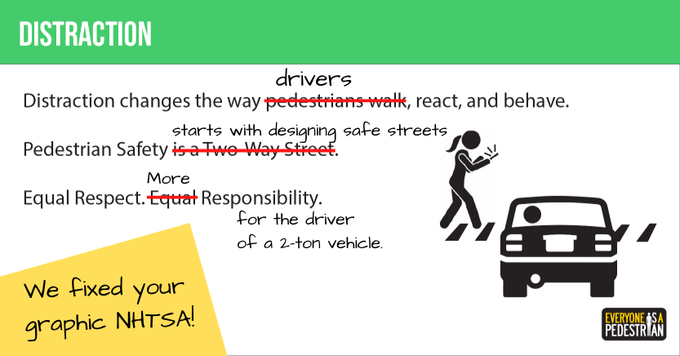 After all, whether in a parking lot, crosswalk, or on a road, everyone is a pedestrian.

This is known as pedestrian-blaming. It is a subset of a larger problem, known as victim-blaming, and is connected to system justification.

Pedestrian-blaming messaging is misleading and distracts from systemic strategies to save Latino and all lives.

A “Pedestrian Safety Month” that ignores system failure does more harm than good because it frames the narrative and shapes policy around ineffective solutions.

That’s why we want to encourage our network to question the status quo and focus on system failure rather than individuals.

That’s also why Transportation for America modified NHTSA graphics to reflect the need for a focus on systems rather than individuals. Check out and share their Twitter thread.

Many people are ready to call out problems with the transportation system when it comes to congestion. They are willing to push local and state leaders to spend tens to hundreds of millions of dollars to widen small segments of just a handful of roads.

Yet, when it comes to people dying on our roads, where are these folks?

Suddenly, the transportation system is fine and these folks blame the “nut behind the wheel”  or the person crossing the street rather than the system. This is known as system justification.

System justification is a theory that suggests people will rationalize the status quo. They believe social, economic, and political systems must be fair and advantageous, otherwise they would not be in place, according to a Salud America! Research Review.

They may even believe in and justify systems that are unfair and causing harm because system justification addresses the fundamental human need to reduce uncertainty, threat, and social discord.

This belief is problematic because it can hinder efforts to promote justice.

Our transportation system is neither fair, nor advantageous. We have gotten traffic safety all wrong, which is why the traffic death rate has gone up although people have been driving less since the COVID-19 pandemic began.

This illustrates that the problem is systemic, not individual, thus calls for systemic solutions.

Blaming individual Americans within this dangerous system can interfere with systemic efforts to save lives.

At local level, in San Antonio, for example, 33% of severe pedestrian injuries occur on just 1% of roadways.

Again, this illustrates that the problem is systemic, not random, thus calls for systemic solutions.

Focusing on San Antonio residents who walk distracts from necessary systemic efforts to save lives.

Both empirical research and natural experiments have demonstrated that systemic efforts to reform streets work.

Two European cities, for example, invested in systemic solutions and cut pedestrian deaths to zero in 2019.

Oslo, Norway and Helsinki, Finland reduced speed limits, changed street design, and redistributed space for cars to space for people. As a result of these systemic solutions, zero sons, daughters, sisters, brothers, fathers, mothers, and friends were killed while walking or biking in these two cities.

And when a national transportation agency comes out with a pedestrian-blaming playbook, it is time to speak up against transportation system failure.

The problem is the focus is on individual failure rather than systemic failure.

The playbook is split into four sections, one for each week of the month:

It is important to note that the playbook neglects to mention people with disabilities.

Although the playbook calls attention to the need for drivers to obey posted speed limits, this is misleading because speed is the problem, not merely speeding. A pedestrian has a 50% chance of survival if struck by a vehicle at 35 mph whether the posted speed is 30mph or 40mph. Additionally, posted speed limits were determined by and roads have been designed to antiquated standards from rural areas in the mid-1900s.

A distracted pedestrian is no where near as lethal as a distracted motorist. One is vulnerable and one is operating and protected by a 4,000-pound vehicle. Messaging that suggests equal respect and equal responsibility is negligent.

“Educational campaigns that chastise pedestrians, will do nothing to create safer streets for children, the elderly, or people vision impairments, each of who experience challenges similar to the effects of distraction,” according to transportation researchers at Rutgers.

Instead of calling for safer streets, NHTSA calls for individuals walking to carry flashlights and wrap themselves in fluorescent tape and calls for children to make eye contact with motorists.

Ultimately, the NHTSA failed to acknowledge the biggest player in safety: road design.

If transportation agencies actually wanted to create a transportation system that works for everyone, they wouldn’t spend time drafting press releases and crafting graphics that notify the public that older adults are overrepresented in pedestrian crashes without providing any systemic improvements on how to address the issue.

Just because they have a certain degree or hold a certain office, does not mean they are making decisions in your best interest.

Remember how housing and highway policies and practices segregated and destroyed low-income communities of color?

The technocrats are not always rational.

That’s where you come in.

Question who came up with speed limits in your community, how, and when.

Urge elected officials to find answers to these questions.

Urge elected officials and urban and transportation planners to ensure that all policies, projects, and communications is inclusive of Latino needs, representative of existing inequities, and responsibly evaluated and measured. These are the three key considerations to equitable systems change.

Stand up to NHTSA’s misleading, pedestrian-blaming messaging and share graphics and tweets from Transportation for America’s Twitter thread.