Ken Reashor: safer to jaywalk than to use a crosswalk 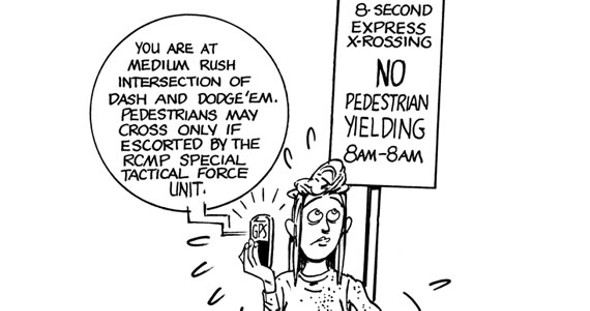 A week ago Tuesday night, someone tried to kill me.

I was walking across Thistle Street in Dartmouth, in the mid-block crosswalk that leads from the Sportsplex to the Common. There was a car coming down the hill, but I had plenty of time to get safely to other side. As I crossed, however, I heard the driver gun his engine, speeding up from perhaps 50kph to 80, and then to what I judged was 100. I broke into a run and was well across the double yellow line---even at his way-over-the-limit speed, the driver had the entire lane to proceed unobstructed---but my mere existence evidently pissed off the driver: as he approached the crosswalk, he swerved across the double yellow line, into the on-coming lane, missing me by about 10 centimetres.

It could've ended differently---it could've been a less-spry person crossing the street or, as was the case a few weeks ago, I could've had a leg injury preventing me from running. Quite plainly, the driver was willing to kill someone for the sin of crossing the street safely in a marked crosswalk.

How has it come to this? How is it that a driver feels he should not even have to see, much less slow down for, a pedestrian in a crosswalk?

Just a few days before I interviewed Ken Reashor, Halifax's manager of traffic, about crosswalk issues. Reashor was part of a "crosswalk safety task force" that was put together a couple of years ago in response to the death of two Dartmouth girls who were struck by cars while crossing the street in marked crosswalks.

The task force looked at, but rejected, the idea of replacing flashing yellow lights at crosswalks with flashing red lights.

"It was considered that it was not in the best interests of the pedestrians," says Reashor. "What do you do when the pedestrian's crossed and you still have the flashing red light?"

I tell him that the driver does what drivers do at every other flashing red light: stop, look around, and if it's safe, go again. Is that really such a big deal?

As Reashor tells it, marked crosswalks are a problem, because pedestrians think they're safe in them.

That might be counterintuitive, but I agree with Reashor. Pedestrian safety works in an entire universe of driver and pedestrian expectations. Every time we nudge things in the direction of "protecting pedestrians" we're actually making it less safe for them. Once we start putting in crosswalks and buttons and lights and strict rules about jaywalking, the drivers expect that the rules are designed to regulate pedestrians, not drivers, and so they drive less carefully.

But adding more pedestrian rules is exactly what Reashor's task force did. The traditional system---green light, pedestrian can cross the street with the right of way---is being replaced with a new push button system---the traffic light may be green but the pedestrian can't cross the street until he or she pushes a button and gets a walk sign, which very often means waiting through an entire light cycle. Pedestrians don't like the system, so continue to cross with the green traffic light but against the don't-walk sign; drivers feel that if the don't-walk sign is up, the driver has the right of way.

Along with the change, the city began airing two TV ads, both telling pedestrians that they better watch out. There are no ads telling drivers to slow down and look out for pedestrians or to not pass in crosswalk zones.

These subtle shifts in expectations matter, such that drivers are more often claiming a right of way they used to yield and, at the extreme, thinking it's OK to simply murder pedestrians.