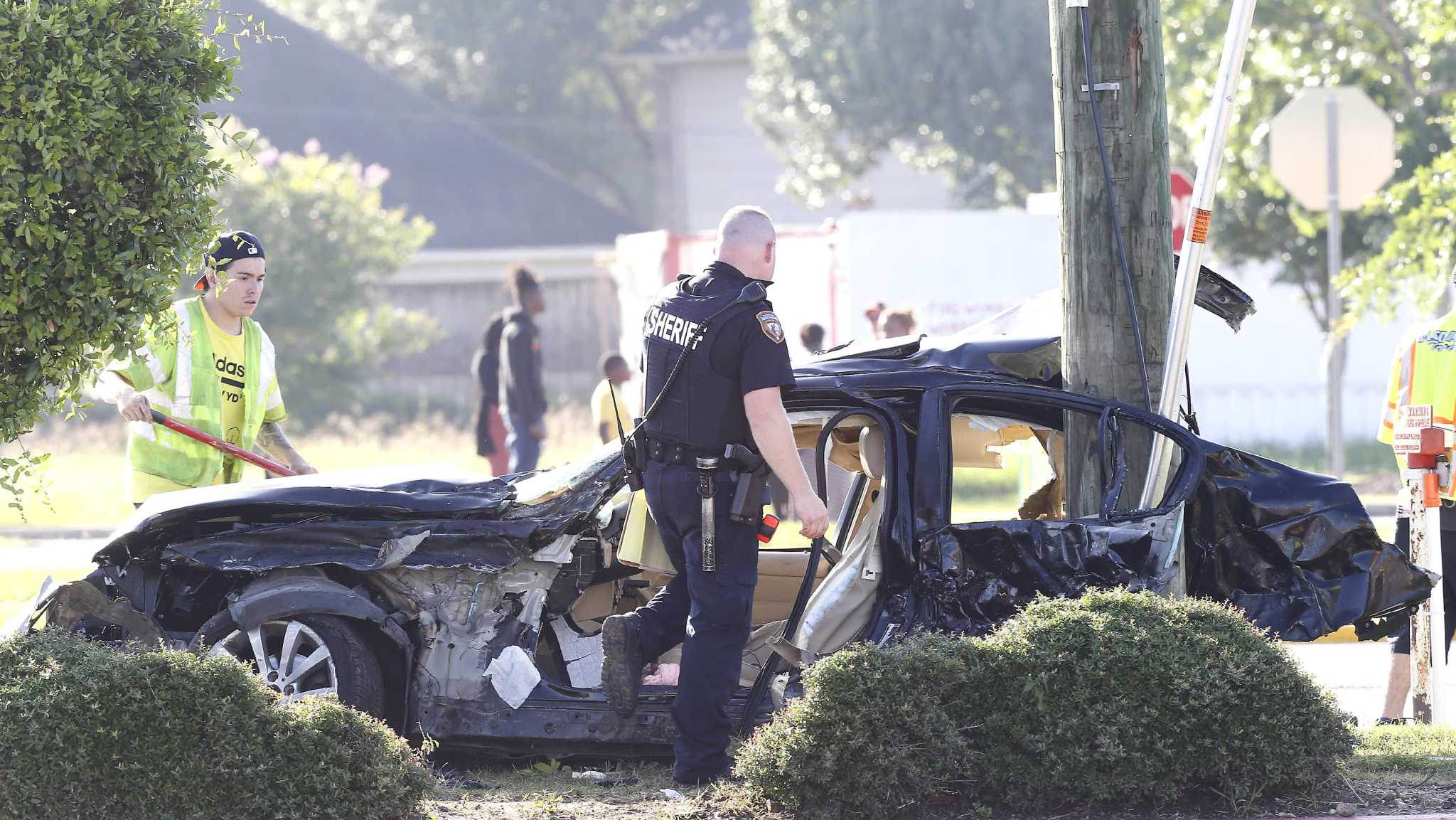 For 20 years, Texans have been dying to get somewhere, and there is little sign they will stop anytime soon.

Saturday marks 20 years of at least one death a day on Texas roads, a grim milestone in a long-simmering safety crisis lawmakers and local agencies have pledged to stop but have barely slowed in the past two years.

“The numbers don't reflect it yet, to be frank,” state Transportation Commissioner Laura Ryan said of efforts to eliminate roadway deaths by 2050.

They eventually will reduce dying on streets, officials said, but only through efforts on numerous fronts. Plans call for spending millions on education campaigns to change driver behavior and keep impaired drivers from choosing to get behind the wheel. Engineers expect to use crash data to identify and then build better intersections and crosswalks. Upcoming state highway repairs include rumble strips to warn drivers when they drift from the road.

Whatever changes officials have in store, the intent is to encourage drivers to do what they need to do to keep themselves and others safe, or not enable whatever it is that leads them to poor choices.

“It is the difference between life and death,” Houston Mayor Sylvester Turner said, noting the city’s plan for eliminating fatalities on city streets will be released later this month. It is expected to recommend significant reconstruction changes at intersections and along major streets.

“No loss of life is acceptable,” Turner said. We need to communicate the value of life over speed.”

OUT OF CONTROL: Houston’s roads, drivers are nation's most deadly

The last time there was a death-free day on Texas roads, Americans were watching a nail-biter election. Eyes not on the road were on Florida as Gov. George W. Bush’s presidential aspirations ebbed and flowed. All the Texans who drove to the polls made it home without dying in a crash.

Every single day since — 7,306 of them — there has been at least one death somewhere on a Lone Star street. More than 70,000 over the two decades, without a break. On a typical day, about 10 people died. Ryan said deaths have reached as high as 19 the worst days.

State officials thought they could get close in March, when a day during the height of the early lockdown looked like a winner. It was not to be as three fatal crashes eventually were logged into the state’s database, including a 26-year-old Dallas man struck by an early-morning hit and run driver, and a 17-year-old whose sport utility vehicle hydroplaned as she sped down Texas 77 in Victoria County before crossing the center line and colliding with a semi-tractor towing a flatbed.

The streak, the centerpiece of TxDOT’s driver education campaign, remains the longest in the nation. California and Florida, the only states with comparable numbers of people and vehicle miles of travel, both have reported death-free days in the past decade.

THE ROADS AHEAD: Major transportation projects that will define mobility in Houston for the next decade

Safety frequently is touted as a part of everything Texas and local officials do to maintain and upgrade roads, but for the past two years officials have started to put more promises in writing. The Texas Department of Transportation, Harris County and Houston have passed Vision Zero pledges that commit to reducing or eliminating traffic deaths on their streets. Last month, the Houston-Galveston Area Council’s Transportation Policy Council — the local board that doles out some federal transportation funds — approved its own pledge to prevent roadway deaths.

That is in addition to almost weekly safety messages about everything from seat belt use to distracted driving to proper use of car seats for small children.

The pledges to end fatalities come as the area becomes more crowded and roads become deadlier. Texas has logged 38,000 roadway deaths since 2010. Since 2014, when fatalities topped 3,500 annually for the first time, they have stayed above that threshold, peaking at 3,851 in 2016, before decreasing gradually to 3,683 last year.

Not even a pandemic that shuttered most businesses and sharply cut driving in the state’s metro areas could slow the pace. This year remains on track for more than 3,600 fatalities, ahead of the pace of 2018 and 2019.

Some of this year’s deaths, Ryan and others say, may be related to COVID clearing streets of traffic, which some motorists approached as a license to drive irresponsibly.

“Some of what we’re seeing is what I would call insane speeds,” Ryan said. “It was reckless speeding, all-out.”

High-speed wrecks especially are on the rise in major metro areas such as Houston. Police in the eight-county region listed excessive speed as a factor in 106 of the 530 fatal street crashes so far this year, the highest number since 2017.

Drivers, many of whom are keeping a tighter grip on the steering wheel, said they were not surprised.

“Sometimes I don’t feel safe,” said Margaret Rounds-Smith, 40, who lives in the Memorial area and said the problem of is the worst on major streets such as Westheimer and Hillcroft. “Drivers just speed from red light to red light.”

The behavior, some safety advocates argue, is based on the environment, something education campaigns cannot correct. Instead, many point to the need for TxDOT and city officials to correct the conditions that make racing down Westheimer or traveling 80 mph on Interstate 10 so appealing.

PIERCE ELIMINATED: TxDOT’s $7 billion plan to shorten your I-45 commute may displace hundreds of families

Officials concede design has a role in roadway safety, but state and local officials focus their plans in different places, in part because of the roads they oversee. TxDOT last year committed $600 million to projects related to safety upgrades, such as cable barriers in the middle of freeways to prevent head-on collisions when vehicles cross into oncoming lanes or turn lanes at intersections to reduce the risk of rear-end collisions.

In the Houston area, TxDOT District Engineer Eliza Paul said highway officials are spending $27 million on various projects, including new or improved median barriers on Texas 105 in Montgomery County and FM 1962 in Harris and Brazoria counties, aimed at reducing head-on collisions on roads that have a high risk of crashes. Plans also include barriers to stop pedestrians from trying to cross Interstate 45 and Interstate 69 in key areas north and south of downtown Houston, where people have died dashing across the freeway.

Ryan said part of TxDOT’s focus is rebuilding roads to be “more forgiving” so drivers have a bit more cushion before catastrophe, such as wider lanes and barriers to keep impediments out of drivers’ way. In many cases, however, that means lanes and curves intended to have speed limits at 45 mph are designed with the engineering for 60 mph roads.

“What we try to do is exceed the standards,” Ryan said.

The risk is that people sense that extra room and exceed the posted speed limit, nullifying the safety benefits.

“We have gone the other way on that,” Houston Public Works Director Carol Haddock said of efforts to widen roads.

Instead of adding room, Haddock said the city is looking at narrowing streets in some places to add sidewalk space to improve pedestrian safety and while giving drivers less room in hopes of keeping their speeding inclinations in check.

Officials also plan to go back to Austin once the Texas Legislature is in session next year and seek changes to state rules that allow cities to make the prima facie speed — the speed limit on all local streets where one is not posted — 25 mph instead of 35 mph. City officials have tried to change the standard each of the last three sessions, to no avail.

Even without the speed changes, Haddock said Public Works and others are pressing ahead, in some cases by rethinking projects already on the books, such as plans to make some city streets bigger, but not necessarily safer.

“We have projects in the pipeline in a few places where the project as designed, that are widening to six lanes,” Haddock said. “We may look back and say ‘you know what, we need to have four lanes.’”

She noted some of the changes require not only drivers, but officials and city street engineers, to adjust.

“I will promise you it makes the engineers nervous,” Haddock said of the city’s Vision Zero goal which commits to no fatalities. “But it is the right number. It is unacceptable we have people die on our roadways.”