Truck Driver Fatigue: What Is It & How To Prevent It? | Michigan Auto Law 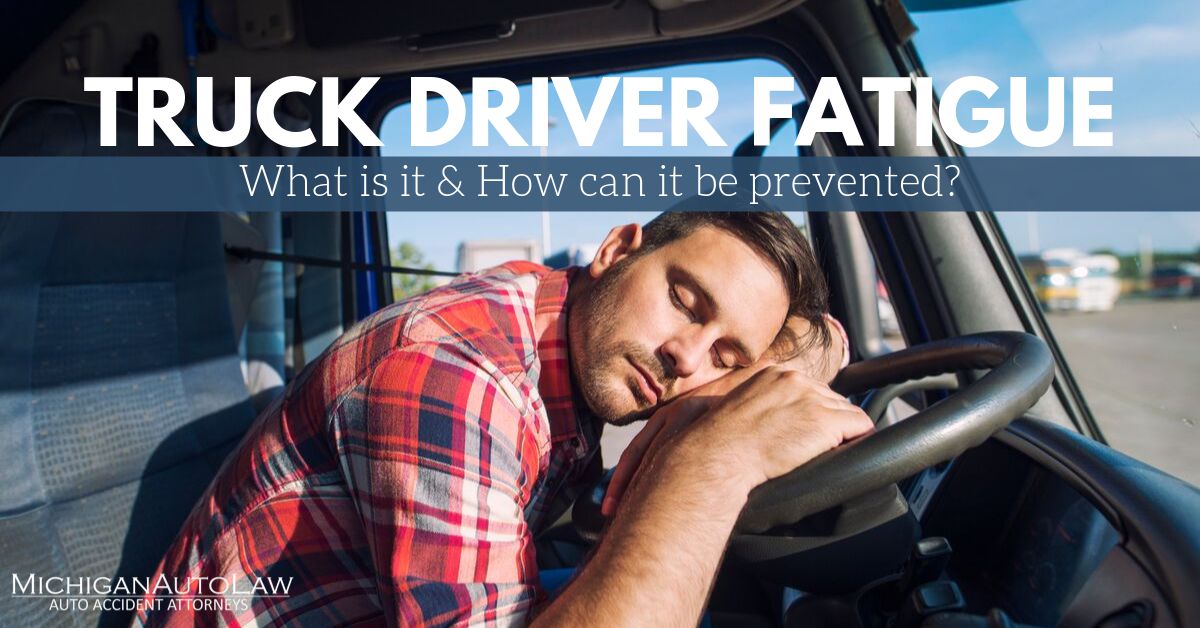 Truck driver fatigue is a serious threat to public safety. It is a disturbingly common cause of fatal truck crashes, yet it is 100% preventable.

In this blog post, I will discuss what it is, how dangerous it is, how the hours-of-service rules were enacted to combat it and tips for preventing it.

Truck driver fatigue is typically caused by inadequate sleep, by working too many hours, or by driving while sick. This is one of the most dangerous impairments a truck driver can experience.

The Federal Motor Carrier Safety Administration (FMCSA), the federal agency responsible for policing and regulating truckers and trucking companies to ensure they operate safely on the nation’s roadways, describes truck driver fatigue as the “result of physical or mental exertion that impairs performance.”

Studies have found it to be a more potent driving impairment than the influence of drugs or alcohol — yet a wide number of truck drivers bend the rules to maximize their time behind the wheel.

The U.S. Transportation Secretary has observed that “[n]early 4,000 people die in large truck crashes each year and driver fatigue is a leading factor.”

The Federal Motor Carrier Safety Administration (FMCSA)’s “Large Truck and Bus Crash Facts” study for 2017 found that fatigue was a “driver impairment-related factor” in fatal truck crashes between 2015 and 2017 with the following frequency:

In an effort to prevent truck driver fatigue, the Federal Motor Carrier Safety Administration (FMCSA) created hours-of-service rules which regulate the amount of time each workday that truck drivers can spend driving and/or otherwise performing tasks that qualify as being “on-duty.”

For example, under 49 CFR 395.3, drivers are limited to 60 hours of compensated work in a seven-day period or 70 hours in an eight-day period.

In explaining the need for hours-of-service rules, the U.S. Transportation Secretary explained that one of the significant challenges with combating truck driver fatigue is that in addition to impairing truckers’ ability to drive, fatigue impairs their ability to assess and evaluate their own fatigue levels:

“That fatigue leads drivers to have slower reaction times and a reduced ability to assess situations quickly. One of the most dangerous elements of fatigue is how quickly it can sneak up on vehicle operators, be they car drivers or truck drivers. The research revealed that truck drivers (like most people) often can’t assess their own fatigue levels accurately and are therefore unaware that their performance has degraded. Too often, fatigued drivers fail to notice that they are drifting between lanes.”

For the truckers, breaking the truck driver hours-of-service rules can mean the difference between putting food on the table, or being next in the unemployment line.

This is a hot topic right now for the trucking industry and truck accident lawyers, and for a very good reason.

A tired truck driver is as impaired as an intoxicated driver and fatigue is one of the most common causes of truck accidents, both in Michigan and across the country.

Found at 49 CFR 395.3 and 395.8, they are some of the most important federal regulations for lawyers to remember in any truck crash case.

Knowledge of hours-of-service regulations, coupled with a careful study of a truck driver’s record of duty status as reflected in the data from his or her “electronic logging device” (which replaced written log books in December 2017) can reveal fatigue.

Drivers are limited to a total of 14 hours of work in a single “on-duty” period. This type of non-driving activity could include all time:

Virtually any work performed on behalf of a motor carrier should be added to a driver’s 14-hour daily work limit.

However, even work performed for another company or organization will count toward a driver’s on-duty period – even if it’s completely unrelated to the trucking industry.

This is confirmed by the official interpretation of 49 CFR 395.2 which appears on the “Guidance Q & A” page of the FMCSA’s website: