Pedestrian Car Accident Statistics: October Is The Most Dangerous 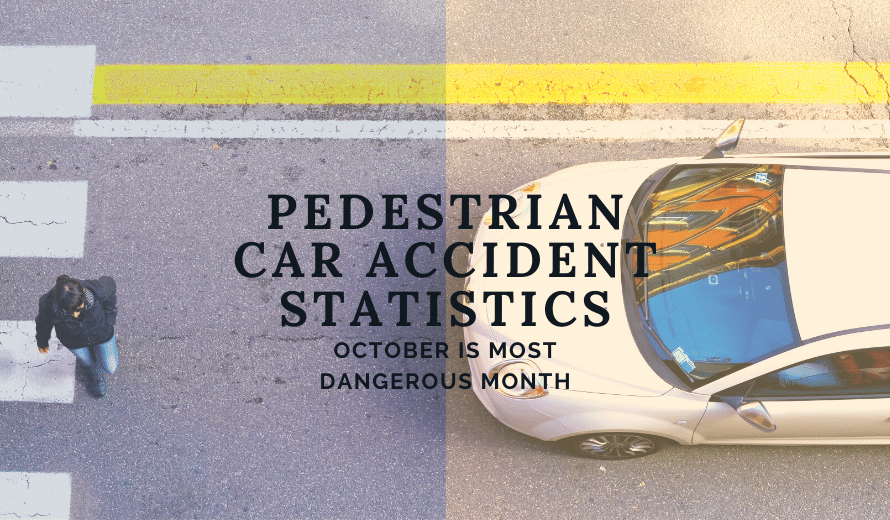 This explains why October was recently designated “National Pedestrian Safety Month” by the U.S. Department of Transportation and the Governors Highway Safety Association on September 29, 2020.

Unfortunately, October is dangerous for everyone when it comes to automobile crashes – whether you are traveling by foot or driving in a car. For the past five years, October has had the highest number of injury-related motor vehicle crashes in Michigan.

October is this Thursday and just around the corner. Our injury attorneys want everyone to be aware of what makes October the most dangerous month so we can all take steps to keep ourselves and our families safe.

Over the last five years, October has had the highest total number of pedestrians injured and killed as a result of pedestrian-involved automobile crashes in Michigan. The chart below shows how that data stacks up.

Pedestrian car accident statistics show the month of October had the highest total number of people traveling by foot injured in motor vehicle crashes in Michigan between 2015 and 2019.

Here are the top ten Michigan cities for injuries and fatalities resulting from these types of crashes for 2015 through 2019:

Not surprisingly, the numbers for injuries and deaths for walkers resulting from automobile crashes are higher in heavily populated Michigan cities with more walkable downtown areas. College towns, such as Ann Arbor, East Lansing, and Kalamazoo also see higher numbers of walkers hit by cars due to more students and walkable college towns.

According to the pedestrian car accident statistics, Detroit has always had the highest number of people traveling by foot hit and injured by motor vehicles. While the addition of street lights has helped to improve safety and visibility and reduce fatalities in the city of Detroit over the past few years, the number of people being hit by cars and injured has remained fairly steady.

There are several factors that likely explain why the pedestrian car accident statistics show October being the most dangerous for people traveling by foot:

To learn more, please check out our blog post “Car Accidents With Pedestrians: How the New Michigan No-Fault Law Affects Them.”

If you were walking and have been injured in this type of crash and need help, or would just like to speak with an experienced personal injury attorney about a related crash, you can call toll free (800) 777-0028 for a free consultation. You can also get help by emailing [email protected] or you can use the chat feature on our Michigan Auto Law website.