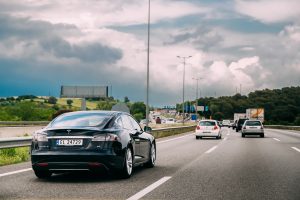 Researchers from the Massachusetts Institute of Technology (MIT) released a study that found that Tesla drivers are more distracted when they use the company’s semi-autonomous Autopilot that is in Tesla vehicles now. According to a CNN report, the findings support calls for Tesla to take more steps to keep drivers attentive for their own safety.

Tesla’s Autopilot is a semi-autonomous driver-assist system that is designed to steer the car, help it stay in its lane and keep up with traffic on divided highways. But Tesla has acknowledged that the software is imperfect and after fatal crashes involving Autopilot, has said that drivers should keep their eyes on the road and hands on the wheel even when Autopilot is engaged.

However, in spite of these warnings from Tesla, the MIT study has found that drivers do take their eyes off their road and pay less attention to driving when Autopilot is engaged. The study also found that 33% of Tesla drivers did not have their hands on the wheel before taking control of the car from Autopilot.

Last week, Tesla CEO Elon Musk acknowledged during the annual shareholder meeting that the company has undertaken a fundamental rewrite of the Autopilot software in recent years. Musk has previously announced ambitious goals for a fully autonomous system, but those efforts have fallen short.

Critics and safety advocates have criticized Tesla for not doing enough to keep drivers safe and for even calling the feature “Autopilot” because it has misled motorists and lulled them into a false sense of security and belief that they will be safe even if they take their hands off the wheel or eyes off the road. The National Transportation Safety Board investigated and called for Tesla to develop a better way to sense if drivers are distracted.

Most recently, Canadian authorities said the driver of a Tesla Model S appeared to be asleep in a reclined seat and that the vehicle appeared to be driving itself when it sped up to 93 mph when they initially attempted to pull the driver over. While Tesla monitors driver alertness through torque on the steering wheel, drivers may be able to give the appearance of alertness by resting an object on the steering wheel. Other automakers such as GM have opted to use a camera and eye-tracking technology to determine if users of its comparable Super Cruise software stay alert.

If you or a loved one has been injured as a result of a Tesla Autopilot crash, you may be able to receive compensation for the injuries and damages you have suffered. An experienced auto defect lawyer will be able to provide more information about pursuing your legal rights.