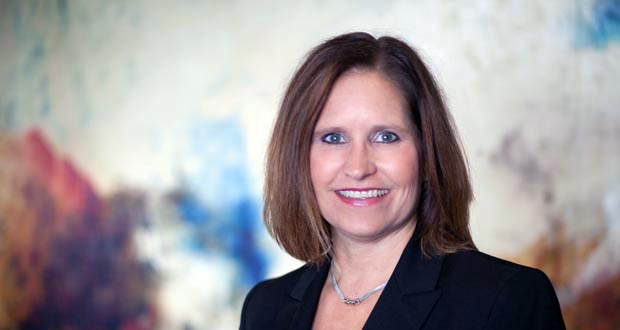 Dyan Ebert has had a strong interest in the law since her middle school days, when she interviewed a local attorney about the legal profession and then penned a paper about her desire to be a lawyer.

That career interest led to a degree at William Mitchell College of Law, a leadership position at Quinlivan & Hughes law firm in St. Cloud, and — as of July — a turn as president of the Minnesota State Bar Association.

In the following interview, Ebert talks about her duties as MSBA president, the challenge of attracting and retaining lawyers in Greater Minnesota, and making sure the justice system is fair for everybody.

The interview has been edited for length and clarity.

Q: Talk a little bit about what drew you to legal profession.

A: I remember being in an eighth-grade civics class and we had to do a career paper on what we wanted to do. I was going to do my paper on being a lawyer. There’s nobody in my family that’s ever been a lawyer before, so I didn’t have that to fall back on. So I connected with a local attorney who happened to be the brother of a really good friend of mine and interviewed him about the job and the profession and wrote my paper, and it was sort of from that point forward I thought, that’s what I was going to do.

Q: What are your primary areas of focus?

A: I clerked for a year with a couple of judges and then I immediately went to work with the firm that I’m at now. It was under a different name at the time. Their history had been in doing insurance defense litigation, so everything from car accidents to premises liability claims to employment claims, anything that traditionally was under the insurance umbrella that would garner some defenses. And so that’s how I grew up, if you will. It has, over the years, developed more into a more narrow practice of working with public entities — a lot of cities, counties, school districts — on employment-related claims and civil rights, constitutional claims, that sort of thing.

Q: Has COVID changed your focus at all?

A: It certainly has changed with all the legislation that has come out in response to COVID. There’s a lot of clients that need advice on what that legislation means for their workforces. So that certainly has at least opened up that avenue of conversation on a more transactional standpoint.

And then, of course, there’s the ongoing question, which is unfortunate: What do we do when we have someone who tests positive and how do we respond to that and how do we handle it? So there has been some of that. Thankfully, not a lot.

Q: Talk about your new duties as president of the Minnesota State Bar Association.

A: The responsibilities of being the bar association president are wide and varied, even in the most usual circumstances. And I would certainly put us now into an unusual circumstance with the COVID era that we’re of course dealing with.

I think there’s slightly over 25,000 attorneys in the state, and almost 14,000 of them belong to the MSBA, so as you can imagine that brings together a wide variety of people and practices. It’s a pretty diverse spectrum of issues that we have to deal with. But the MSBA, at its core, helps deal with the administration of justice, of course, making sure that we’re addressing things that impact our profession. We work to make sure our membership has access to high-quality educational programs. Maintaining public trust in the legal system is very, very high on the MSBA priority list and certainly advocating for the interest of our profession, as well. So as the president, there’s a fair amount of balancing that you have to do on all of those fronts.

Q: I know you have a strong interest in social justice issues. Can you expand on that?

A: One of the main purposes of the MSBA is to aid in the administration of justice and for us to effectively do that, we have to make sure that the justice system is fair for everybody, and not just exclusive to certain members of our society. The MSBA takes that position very seriously. I think the MSBA collectively, like many individuals and organizations following the killing of George Floyd, has had to sort of become more intentional about those responses that will be taken. Our MSBA Council is dedicated to making sure that the MSBA does something to move that needle forward as opposed to just simply reacting to what occurred back in May. I wish I could tell you what those efforts are going to be, but we’re still in the process of figuring that out. We do know that there are lots of organizations that are already working very hard at addressing those issues.

Q: Talk about the struggle to attract and retain lawyers in Greater Minnesota.

A: It’s obviously an issue that’s near and dear to my heart because I do practice in St. Cloud. And I can say that as a business owner, we struggle to get applicants interested in coming out to practice in the Greater Minnesota area. And based upon conversations I’ve had with lots of different people across the state, they’re similarly struggling to attract attorneys to practice outstate.

On a national level, there’s a lot of conversation at the ABA about rural practices across America struggling. So I think as a profession, certainly there are population centers in the metro that are attractive to people that want to practice. But it’s sort of like the old schoolhouse in rural America, in rural Minnesota. Once that closes, everybody says that the community dies. It’s sort of like the local lawyer as well. If you have to drive 70 or 80 miles to find a lawyer who can help you, that’s not good. And so it does stifle access to justice.

Not to say that something good has come of COVID because I think so much bad has, but practicing in the COVID era has really opened up opportunities for Greater Minnesota. You don’t have to drive to the metro for those bar association meetings. We’re doing all of our meetings virtually. And our attendance has been great. We are opening up opportunities for leadership through a virtual platform that someone might not have otherwise considered because it might have been too burdensome to do so. So, you know, we have to look at the silver lining on that.

Q: Do you have any thoughts on that how to attract more women and people of color to the profession and to leadership positions?

A: Diversity and inclusion is certainly part of the core beliefs of MSBA, has been part of our strategic plan for the last several years. And we are always looking for ways to enhance that membership.

There’s a lot of statistics out there. Sometimes just extending the invitation to someone is all they need before they realize that, oh, I do have a seat at the table or someone is interested in me participating. We need to work to identify leaders and identify people that we know would take our organization forward. As a collective, we’ve got MSBA members on board with that conversation.