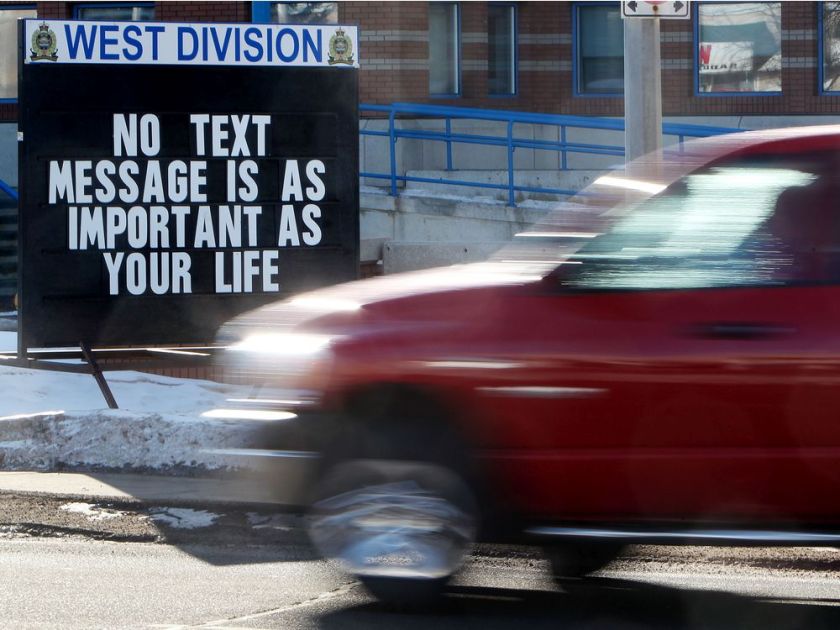 Constant stimulation and short attention spans have become the norm, with phone alerts providing the soundtrack in our hectic lives.

Distracted driving is, hands-down, one of the most serious issues in road safety — and it comes at a great cost.

Distraction as a contributing factor in fatal crashes has grown and, today, approximately one in four fatal crashes involves distraction. What’s concerning is that distraction-related fatalities have exceeded impaired-driving fatalities in several jurisdictions in Canada. In Ontario, provincial police data show one person is injured in a distracted-driving collision every half hour.

The few precious seconds it will take you to read this sentence can be the difference which could help avoid or mitigate a collision.

Risk-taking by drivers who believe they can multi-task, and that they are safer, better drivers is based on perceptions which are fundamentally incorrect. Tasks that take a driver’s mind off the driving task, eyes off the road or hands off the wheel can impede their ability to identify hazards and respond quickly to unexpected changes in the driving environment.

That seems to be the prevailing attitude among Canadians, who believe the problem lies primarily with other drivers.

Results from the latest Desjardins Insurance national survey on road safety are particularly telling. One of the findings reveals that 93 per cent of drivers think they rarely or never drive distracted by a cellphone, but at the same time, 84 per cent claim they often or always see others driving distracted by cellphones.

While the logic behind this statistic appears to be contradictory, what is clear is that the pervasiveness of phones and other electronic devices, as well as a multitude of items in and outside of our vehicles, have created an epidemic of distracted road users.

Yet despite tougher legislation that has brought escalating fines and demerits, with police ramping up efforts to combat the issue, changes in attitudes and in behaviours behind the wheel have been slower to follow.

According to the Desjardins study, more than half of Canadians admit their cellphone distracts them while driving, with 42 per cent saying they use it to look at GPS apps, while 37 per cent use their phone for calls and text messages while in their car.

Many people mistakenly believe that hands-free phones are safer than handheld, but research shows they are not. Research also shows that voice-activated features on phones and in vehicles, which have been developed with safety in mind, are actually more distracting.

This is because many voice-activated technologies are not intuitive in their design. As a consequence, their use creates a greater cognitive load (more mental effort and time on a non-driving task) and can take eyes off the road because the technology is not always accurate, and drivers are inclined to look at the screen to problem-solve.

In terms of protecting personal safety, it’s about being focused on the road when driving, so you can be prepared to respond to those unexpected events that happen on the road every day and that create risk. This risk is compounded by drivers who mistakenly believe that they are an “above-average” driver and able to speed, drive distracted or drive while impaired.

More education is needed to change social norms and reinforce driver awareness that the true test of an “above-average” driver is their vigilance, attention, and ability to immediately respond to the unexpected.

It’s not just drivers who are at risk. Distracted driving has deadly consequences for passengers, pedestrians, cyclists and other road users. We need a commitment from all Canadians to be attentive on the road and to speak up with friends, family and co-workers to reinforce safe driving habits.

Robyn Robertson is the president and CEO of the Traffic Injury Research Foundation.