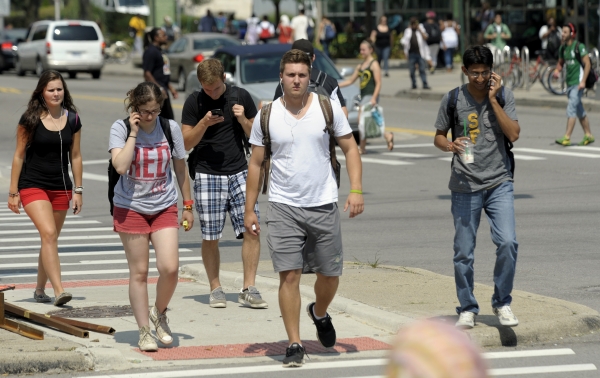 While distracted driving, particularly involving cell phone use, has become a nationwide if not international issue, distracted walking has received less focus. Yet we know that with the number of people driving distracted today, it is all the more important that pedestrians exercise the utmost of safety while walking and especially when crossing streets. Pedestrian safety is an issue that hits close to home at EndDD.org, since EndDD was established by my husband, Joel Feldman and I, after our 21 year- old daughter, Casey Feldmanwas killed in July 2009 by a distracted driver when she was crossing the street at an intersection.

A study just released by Safe Kids Worldwide, “Teens and Distraction; An In-Depth Look at Teens ‘Walking Behaviors” (August 2013) indicates that pedestrian injuries among teenagers in particular have been on the rise, increasing 25 percent in the last five years in the 16-19 year-old age group. In fact, teenagers in that age group account for over half of all pedestrian deaths among children, aged 19 and under. Researchers hypothesized that the increase in pedestrian deaths in this age category was related to the use of mobile devices.

More than 2,400 students then participated in discussion groups led by Safe Kids coalition members. Half of the students (49%) said they use a cell phone while walking to school and 40% admitted to listening to music while walking. Interestingly, when polled, 78% of teens perceived the most at-risk age group for pedestrian injuries to be one other than their own.

Also evidenced in the Safe Kids study is the concept of risk compensation – as safety solutions are engineered to reduce the number and severity of accidents, people actually take more risks. This was apparent in the findings that the odds of a student being distracted are 26% higher if there is a traffic light present. The teens were more willing to take risks when they perceived their surroundings were safe.

As the driver slowed down to his rolling stop, Casey presumably assumed that it was safe to proceed into the crosswalk. She must have assumed that the driver was not distracted, was looking at the road and had seen her.

Where had I as a parent gone wrong? We had not discussed pedestrian safety with Casey for many years, since she was young and learned never to dart out into the street and to stop and look both ways look ways before crossing. As she grew older, our safety talks included alcohol use, safe driving and awareness of the dangers of crime and predators. I can’t remember when we had last spoken about pedestrian safety; this was despite the fact that she went off to college in Manhattan and navigated the congested streets on a daily basis. She was smart and had common sense and while parents always worry, we never envisioned that she could be struck while crossing a street (particularly in the shore community of Ocean City, NJ where the accident occurred).

I have since become acutely aware of the concept of risk compensation. Just because there is a stop sign, you have a crosswalk and the driver appears to be stopping or is even stopped, it is still not safe to cross the street. You must make eye contact with the driver to ensure that he sees you, before it is safe to cross.

We must all be aware as pedestrians and teach our children about the dangers of the roadway, particularly today when technology has so distracted drivers. It is difficult enough to navigate the streets safely when walking; throw in a cell phone or headset and the odds of crossing to safety are certainly reduced.