Sharing Roads and the Zipper Merge in Traffic 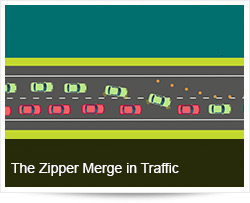 Sharing Roads and the Zipper Merge in Traffic
Introduction
On the Arrive Alive website, we included information on the sharing and changing of lanes. Our failure to be considerate and kind in the way we share the roads is a concern to road authorities.
We tend to hog the overtaking lane, fail to use indicators and sometimes we are simply rude and guilty of aggressive driving.
These risks to safety are further increased when we find a reduction in lanes due to roadworks or where onramps add additional traffic to heavily congested lanes.
This often leads to fender bender collisions, frustration and road rage.
What are the best techniques when merging in Traffic?
It is important to distinguish between an early merge and a late merge:
The Early Merge
Most drivers were taught to use the early-merge method.
We were taught “If your lane is closed-up ahead, try to merge as soon as possible. Don’t wait until the last moment - that’s rude.”
This method is fine in low traffic when vehicles are moving at freeway speeds.
Studies have however shown that the early merge has shortcomings in heavy traffic.
It can lead to fender-benders and long traffic delays.
The Late Merge or Zipper Merge
The “Zipper Merge “is a merging technique aimed at preventing both traffic bottlenecks and crashes near work zones.
In traffic engineering, the late merge or zipper method is a convention for merging traffic into a reduced number of lanes.
When employing the zipper merge, motorists don’t immediately merge when approaching a work zone lane closure.
Vehicles continue using both lanes of traffic until reaching the designated merge area. Then, vehicles in the closed lane alternate entry into the open lane.
Drivers in merging lanes are expected to use both lanes to advance to the lane reduction point and merge at that location, alternating turns.
(From above, it looks a bit like teeth on a zipper coming together.)
The late merge method has not been found to increase throughput (throughput is the number of vehicles that pass through a point in a given period). However, it considerably reduces queue ("backup") length (because drivers use the ending lane until its end) and reduces speed differences between the two lanes, increasing safety.
In the case of Interstate 77 in North Carolina, where signs directed people to use the zipper merge, the length of the backup was reduced from eight miles to two.
The zipper merge promotes greater safety by reducing differences in speed between the two lanes and creating a more orderly process for taking turns in merging, supporters argue.
The zipper merge cuts the overall length of traffic backup by as much as 40%, according to Transport authorities in the USA.
Potential benefits of implementing a late merge strategy include the following:
Increased traffic capacity through the reduced lane zone;
Reduces the overall length of traffic backup;
Decreases the number of collisions; and
Creates a sense of fairness and equity.
Campaigns are often held globally to promote the late merge method because irritation, aggression and feelings of insecurity easily occur while "zipping". Often drivers who change lanes too early do not like to see other drivers continue to speed along until the end of the drop-away lane.
Enforcement, Courtesy and Public Awareness
Merging in traffic is not something that is easily enforced or prosecuted.
Most states in the United States require merging traffic to yield to through traffic which already exists in the lane they wish to enter.
This further complicates the common understanding of proper merging protocol, as even though zipper merging is widely encouraged, those doing so are still legally required to yield, and those who choose not to let them merge are not technically doing anything wrong from a legal standpoint. [It is though highly inconsiderate]
Traffic already in the lane being merged into has the right of way over the merging traffic from the lane that will disappear.
Advice for Safe Driving when Merging in Traffic
Obey traffic laws. Make sure that you can merge. Don’t cross a solid white line.
Always remain alert and attentive. Don’t Drive Distracted!
Use your mirrors to check vehicles around you.
Pay attention to the sequence of vehicles in both lanes and when your gap to merge will appear.
Maintain a safe speed - Merging works best when vehicles from both lanes travel at the same speed.
Pay attention to car “body language.” If a driver sees your turn signal on and speeds up, they probably are not looking to let you merge. If the car narrows the gap between them and the car in front of them, they probably don’t want you to enter.
Never assume other motorists will make room for you to merge. It is better not to force it or you could cause a collision.
Use your indicators well in advance when changing lanes. Don’t merely indicate and change lanes - Check for safety especially in the blindspot of vehicles!
Always maintain a safe following distance.
Acknowledge the driver who allows you to safely merge with a wave of the hand or flick of the hazard lights.
Through a bit more thoughtfulness and a defensive driving attitude, it should be possible to merge safely and without frustration.
Drivers need to show patience and courtesy and share roads with a bit more kindness. Road safety is a team activity where the goal is for everyone to Arrive Alive at their destinations!
[A word of appreciation to MasterDrive for assistance received]