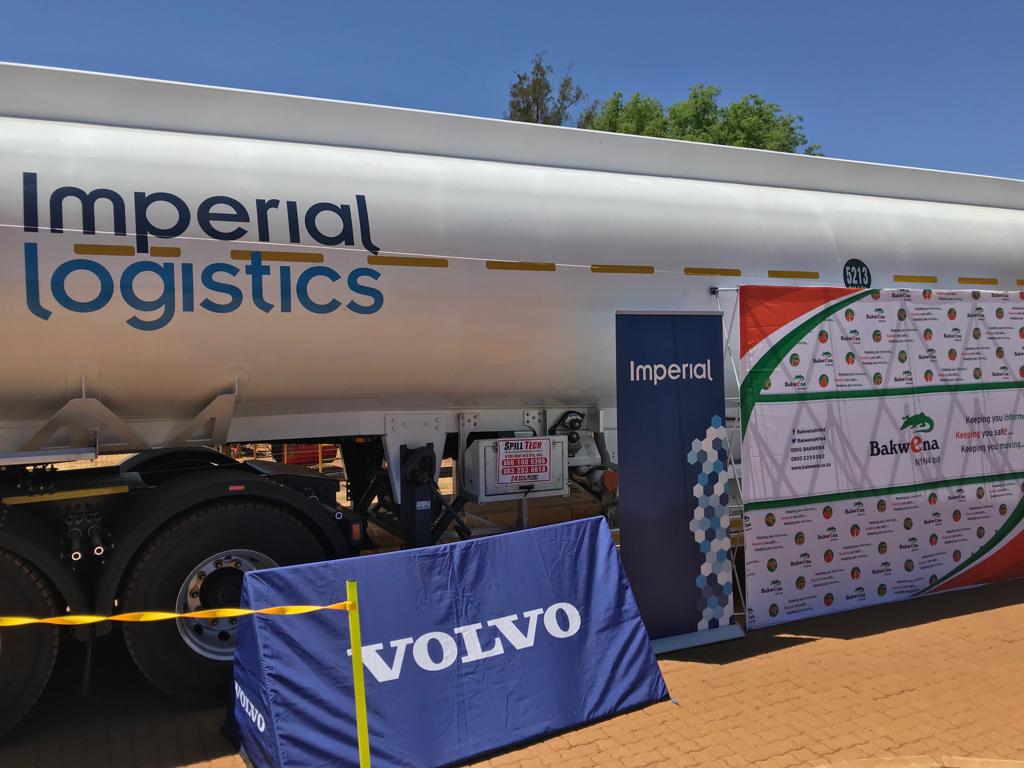 Road transport month activation launched along the N4, Dinokana.
29 October 2019 | Road Safety Highlights
Over the next few days, 7 primary schools and approximately 3000 pupils within the Dinokana township will be made aware of road safety. These kids are especially vulnerable to the risk of being run over by vehicles when walking to school and back. Imperial Logistics Specialised Freight, together with our partners, Volvo, Bakwena and Spilltech, will be engaging with the pupils, as well as the local communities in creating road safety awareness.
Activities will include the following:
1. Road Safety Talks at each school
2. Heavy Trucks Awareness at each School, where limitations such as blind spots and breaking distances will be discussed.
3. School Bus drivers will be engaged on safe driving techniques
4. Tavern Talks will be held, whereby the local communities, often visiting taverns until late at night, will be educated and equipped with high visibility caps to ensure that they are visible when walking home.
Thanks to Imperial Logistics, each pupil will also be receiving a reflective bag with some goodies, which they can use going forward.
Looking forward to making a difference! #safelives
Share This Page
Fuel to drop as oil eases ...
29 Oct 2019 | From Arrive Alive
Fuel prices are set for slight drops across the board in the wake of oil price retreats in October. This is according to the AA, which was commenting on unaudited month-end fuel price data released by the Central Energy Fund (CEF). "The Rand has pulled back from its high point at the start of
Multiple injured in a taxi rollover on the N3...
29 Oct 2019 | From Arrive Alive
Emer-G-Med responded to a collision on the N3 North, between Warden and Roadside. A Taxi lost control and overturned. Multiple people with injuries. Paramedics transported three patients to the hospital. Other patients transported by EMS. Local authorities were on scene for investigations. Multiple
Head-on collision leaves one dead, five injured on the R59...
28 Oct 2019 | From Arrive Alive
One person was killed and five others injured, including four children, when three vehicles collided on the R59 between Vereeniging and Vaalpark. ER24 paramedics arrived on the scene at 07h45 to find two wrecked light motor vehicles in the middle of the road. A third light motor vehicle was found
23 People injured in scholar transport taxi crash on the N2 at Baboyi ...
28 Oct 2019 | From Arrive Alive
This morning at approximately 7:30 am Kwazulu Private Ambulance Service responded to the N2 Baboyi for an accident. When emergency services arrived they found that a taxi taking children to school, had lost control and flipped onto its side. Paramedics quickly assessed the scene and found 23 patients
Two taxis collide leaving fourteen injured in Raslouw...
28 Oct 2019 | From Arrive Alive
Fourteen people were left injured this morning when two taxis collided on the R55 in Raslouw, Centurion. ER24 paramedics, along with several other services, arrived on the scene at 08h04 to find the two taxis parked on the side of the road. The passengers had already climbed out of the two vehicles
KwaZulu-Natal: Cash in transit guard shot in a robbery in Kwa Mashu ...
28 Oct 2019 | From Arrive Alive
KwaZulu-Natal: At 08H25 Monday morning Netcare 911 responded to reports of a shooting at the Tembelishwe Railway Station in Kwa Mashu, North of Durban. Reports from the scene indicate that cash in transit robbery had taken place. Medics assessed the scene and found that an adult male guard had
Healing of the Wounds prayer held for road crash victims in KwaXimba outside Cato Ridge...
28 Oct 2019 | From Arrive Alive
MEC for Transport, Community Safety and Liaison, Mr Bheki Ntuli led the Healing of the Wounds prayer for road crash victims in KwaXimba outside Cato Ridge. The prayer was held in remembrance of the many road crash victims who lost their lives in road crashes over the past several years. This includes
Gauteng: Car crashes through shack killing one occupant who was sleeping....
27 Oct 2019 | From Arrive Alive
Gauteng: At 06H12 Sunday morning Netcare 911 responded to reports of a collision on Impala Road Soweto in the direction of Protea Glen. Reports from the scene indicate that the driver of a light motor vehicle lost control resulting in the vehicle leaving the road crashing through an informal settlement. The
KwaZulu-Natal: Three injured in gas bottle explosion at restaurant in Ballito...
27 Oct 2019 | From Arrive Alive
KwaZulu-Natal: At 14H08 Sunday afternoon Netcare 911 responded to reports of an explosion at a restuarant on Compensation Beach road in Ballito on the KZN North Coast. Reports from the alleged a LP gas cylinder had exploded in the kitchen injuring multiple people in the process. Medics assessed