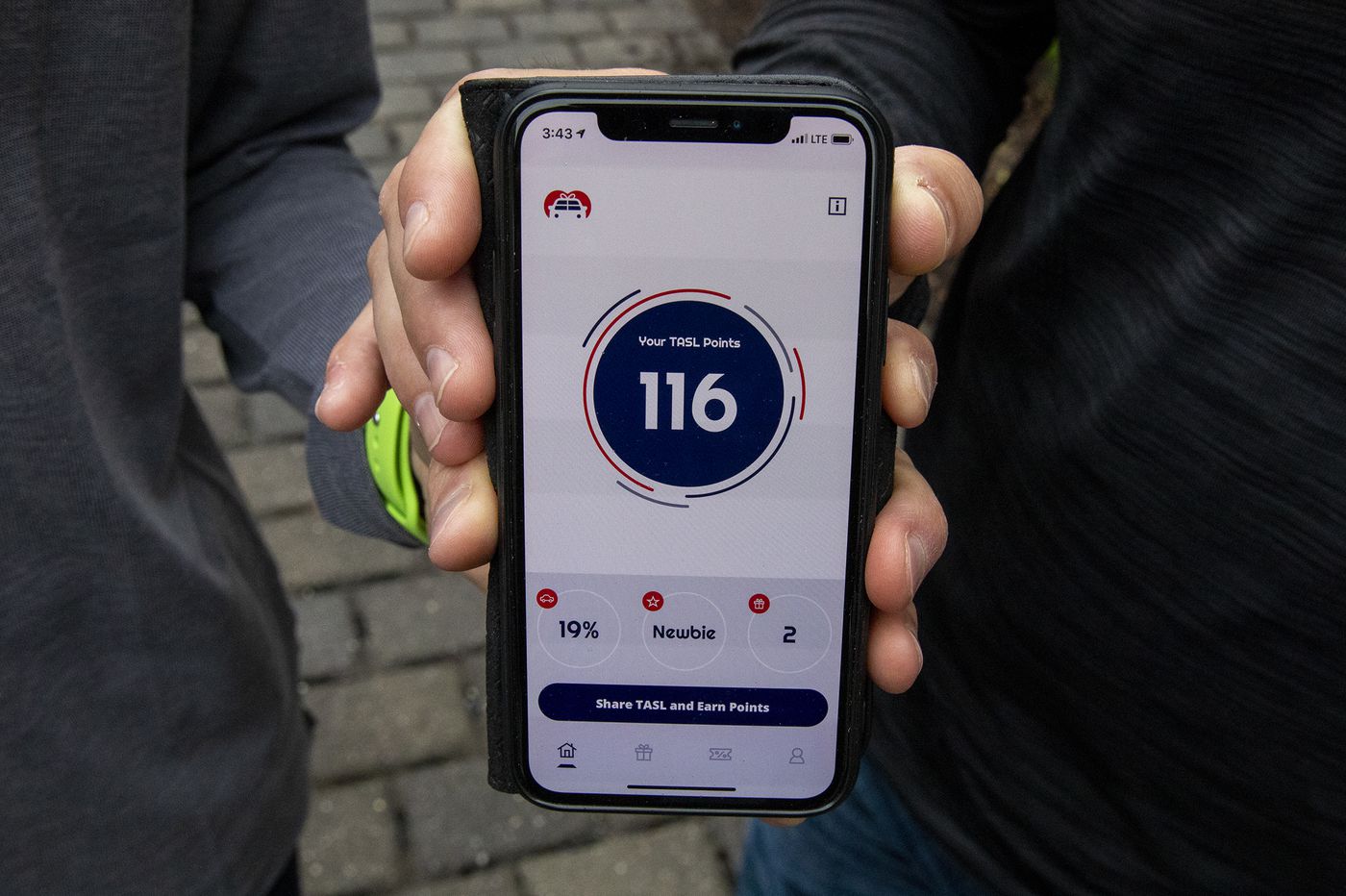 This local former ‘Shark Tank’ winner has created a new app that rewards drivers who keep their eyes on the road
by Terri Akman, Updated: November 3, 2019- 5:00 AM
Ryan Frankel and Nate Wagner have created This App Saves Lives, which uses a point system to reward drivers for every minute they drive without distraction from their mobile devices.
TYGER WILLIAMS / Staff Photographer
Ryan Frankel knows about the dangers of distracted driving. In 2015, while riding his bike, a driver blew through a red light, forcing Frankel off the road and causing him to fracture his hip and elbow. Frankel wonders if the driver even saw him.
“That experience replayed itself over the course of the next several years, seeing the number of people texting while operating a moving vehicle,” said Frankel, 35, who lives in Queen Village.
Related stories
Who wants to hear an audio tour about a disgusting Philly epidemic? 10,000 visitors, that’s who
by Stephen Fried
by Stephanie Farr
Determined to encourage drivers to stay off their phones — a leading cause of distracted driving — he and his business partner, Nate Wagner, have created This App Saves Lives (TASL), a phone app that rewards drivers for keeping their eyes on the road.
Statistics show how badly American drivers need to change their habits behind the wheel. According to the Centers for Disease Control and Prevention, each day in the United States, approximately nine people are killed and more than 1,000 injured in crashes that are reported to involve a distracted driver.
TASL launches Nov. 12, and here’s how it works: Using GPS, the app automatically detects when you’re in a moving vehicle, based on rate of speed. You accrue one TASL reward point for every minute that passes without engaging with the phone. It’s OK to stream music, use the GPS, and engage in hands-free calls. But anything that involves taking your eyes off the road — texting, e-mailing, browsing the web or watching a video — will deduct points from your accrual.
Users can redeem points from TASL’s partners, like Shake Shack and Famous 4th Street Cookies.
Inquirer Morning Newsletter
Get the news you need to start your day
Sign Up
Inquirer Morning Newsletter
“We like to call it the carrot not the stick approach, incentivizing people to make the right decisions and rewarding them for doing so,” Frankel said.
TYGER WILLIAMS / Staff Photographer
Former "Shark Tank" winner Ryan Frankel, left, and Nate Wagner have created This App Saves Lives, which uses a point system to reward drivers for every minute they drive without distraction from their mobile devices.
Frankel recognizes that “a bad actor” could cheat the app, possibly using TASL as a passenger or while on a bus. “If 99% of the time we’re reducing the prevalence of distracted driving, but 1% of the time someone wants to earn points while being a passenger in a car, that’s an acceptable by-product of what we are doing,” he said.
Nuts to You signed on early as one of TASL’s reward partners to support the app’s mission.
“The number of accidents from distracted driving has been going through the roof, and any way we can help curb that and reward people for it is a great thing to be involved with,” said the company’s owner, Justin Bernstein.
Beyond financial support from brand partners, a $20,000 Indiegogo campaign will launch along with the app to support TASL’s operations and marketing campaign.
One key to the app’s success will be getting young drivers on board, said Wagner, a technology teacher at Haverford Middle School, who sees how thoroughly teens are engaged with their devices. This is the time to get them into the habit of putting them down.
Over 70 area high schools have signed on as TASL partners — that’s about 55,000 students, said Wagner, who is providing the schools with a promotional video and other TASL marketing materials. “Each school had unique strategies” to promote the app, he said, some within student organizations, some to the entire student body and community.
Anthony Larson, a junior at Haverford High School, is excited about using TASL.
“It’s starting to become more apparent that technology [use] and accidents have a relationship,” he said, similar to the way drinking and auto accidents are now seen as related, which young people have addressed with groups like Students Against Drunk Driving. “TASL is putting a spotlight on distracted driving.”
Frankel and Wagner both have entrepreneurial experience. In 2012, Frankel pitched Verbalize It , an on-demand human-powered translation service, to Shark Tank, walking away with a deal from businessman Kevin O’Leary. He ultimately turned down O’Leary’s offer, instead raising capital and selling the company in 2016. As for Wagner, he started his own moving company at the age of 19, selling it in 2018.
Both also became new dads this year: Frankel’s daughter was born in February; Wagner’s daughter in June.
“The entrepreneur in me is motivated to solve a truly meaningful problem,” said Frankel. “But the father in me is especially driven to make the world a safer place for my daughter and all of the sons and daughters around us."
Posted: November 3, 2019 - 5:00 AM
Terri Akman
Get the news you need to start your day
Sign Up