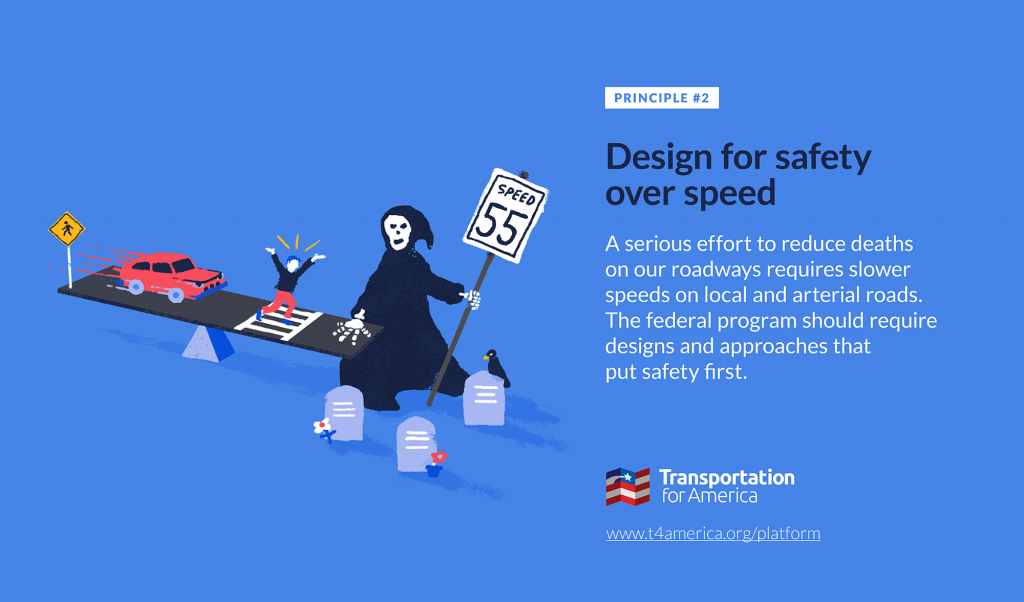 We face an epidemic of people struck and killed while walking and biking because our local streets—not just highways—are designed to move vehicles at the highest speeds possible rather than prioritizing the safety of everyone. It’s high time to stop sacrificing safety on the altar of speed with the tens of billions that the federal government spends every year. Here’s how Congress could make that happen.

It’s “safety over speed” week here at T4America, and we are spending the week unpacking our second of three principles for transportation investment. Read more about those principles and if you’re new to T4America, you can sign up for email here. Follow along on @T4America this week and check back here on the blog for more related content all week long.

That’s how many people were struck and killed by cars while walking on streets all across the United States between 2008 and 2017. Almost 50,000 preventable deaths.

And yet, by and large, we call these crashes “accidents.” We still believe that these 50,000 deaths, and the deaths ofalmost 32,000 peopleevery year killed inside of vehicles, are either just the cost of doing business for our transportation system, or were the product of bad behavior: distracted drivers, fatigued drivers, drunk drivers, or drivers not wearing seat belts.

When crashes occur at higher speeds, they are more likely to be fatal, especially when they involve a person biking or walking.

In 2017—the year in which pedestrian and cyclist fatalities first reached the highest level since 1990—theNTSB issued a landmark studyabout how speed is the #1 culprit in traffic fatalities, finding that scores of crashes would not have been fatal at lower speeds.

The only way to make a high speed roads safe is by separating opposing traffic; removing conflict points, like driveways and cross streets; and separating or removing cyclists and pedestrians. Of course, this is something we frequently do: it’s called a limited-access highway.

But we’ve tried to design for similar high speeds on our arterial roadways in existing communities while retaining all the points of conflict that make those speeds deadly. Think of any suburban road lined with retail, offices, schools, and homes. Those streets—with multiple destinations along them—are designed like highways.

Our sister organization, the National Complete Streets Coalition, explains that most cyclist and pedestrian fatalities occur on these 35-50 mph arterial roadways in our urban and suburban areas—roads designed for high speed but with all the conflict points of the slower speed streets, like slip lanes or numerous curb cuts for entrances and exits across a sidewalk.

If we want these roads to be safe, they either need to become limited-access highways (unlikely, expensive and damaging for the local context) or they need to be designed for lower speeds with lower speed limits.

And we know exactly what speed these roads need to be designed for: 35 miles per hour, or less in many cases. But 35 should be the ceiling for these types of roads, not the floor, when it comes to design speed.

We are pursuing higher speed roadways because we have placed jobs and services far away from the homes of the people who need them. We make up for the inconvenient location of everyday necessities with higher speeds in hopes of shorter travel time, but it never works out that way. Instead, we get a lot of traffic congestion as everyone floods onto the same roads, seeking the same far-away, disconnected destinations. Even in free- flowing traffic, people save seconds or, rarely, a minute or two. And for that, we sacrifice thousands of innocent lives each year. More often than not, those killed are children, the elderly or those with lower incomes.

Currently we only call a crash “speed related” when someone was driving over the speed limit. We don’t track whether the speed limit was inappropriately high, or if the speed  of the car played a factor in the crash or fatality even if the speed was under the posted limit. In fact, numerous local governments across the country are in arguments with states on who has the authority to lower speed limits.

It’s time to determine and report when speed was a cause of a crash. It’s time to give local governments the authority to lower speeds to make a street safe and appropriate for its surroundings. And engineers should design roadways in support of slower, safer speeds.

Congress can make protecting the safety of all people who use the street a priority by reflecting this in the decisions they make about how to fund, design, operate, maintain, and measure the success of our roads. The federal program should require designs and approaches that put safety—for everyone—first.