Buckling up to save lives 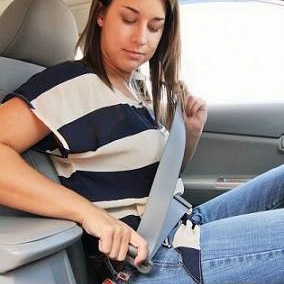 It takes only two seconds to click on a seatbelt. But, according to Jana L. Tidwell, manager of public and government affairs for AAA Mid-Atlantic, a life can be lost in the same amount of time from not wearing one.

“Buckling up is the most important safety measure you can take to protect yourself in a crash. Research shows that seatbelts reduce serious crash-related injuries and deaths by nearly half,” she said. “Seatbelts, credited for saving nearly 15,000 lives in 2017, have become habit for most drivers, but not all drivers.”

In order to instill seatbelt use in teen drivers so that it becomes a “lifesaving habit” throughout their lifetime behind the wheel, AAA Mid-Atlantic is once again sponsoring the Bucks County High School Seatbelt Safety Challenge.

Hosted by TMA Bucks and currently celebrating its 13th year, the initiative is tasking high schools throughout the county with achieving the highest seatbelt usage this school year.

Baseline surveys of student driver seatbelt use have been conducted at every public and private high school in Bucks County without the knowledge of the student body or administration. This was done in order to ensure the most accurate data sampling. Each school’s result is being forwarded to the administration with an invitation to participate in the challenge.

Participating schools are encouraged to raise their student driver seatbelt usage over the course of the academic year. Various student groups at each school will work to actively promote seatbelt use within the student body using posters, T-shirts, school-wide announcements and other creative messages.

“TMA Bucks is thrilled to once again bring this results-driven initiative to Bucks County high schools,” said Steve Noll, TMA Bucks executive director. “We cannot be more proud of the progress this program has made, as the total combined school average for baseline surveys this past fall reached at least 90 percent for the fourth straight year, a far cry from the dangerously low 65 percent average back in 2008, when this life-saving program began.”

Last year’s challenge saw 20 high schools compete. New Hope-Solebury student drivers had the highest overall seatbelt use (97 percent), while Pennridge High School achieved the greatest percentage increase in seatbelt use over all schools at 7 percent (88 percent in the fall to 95 percent in the spring).

Pennridge was also voted the winner of 2018’s Teen Driver Safety Video PSA Challenge, another component of the Seatbelt Challenge. High schools have the opportunity to produce and submit a 30-second video PSA on teen driver safety. It can deal with any aspect, including seatbelts, texting, distracted driving and speeding.

The school that is selected as the winner of the Teen Driver Safety Video PSA Challenge will receive a $500 cash grant, and the students’ video will play on Comcast networking. Videos must be uploaded to YouTube with the link emailed to dave@bctma.com by April 1, 2020 to be eligible to win.