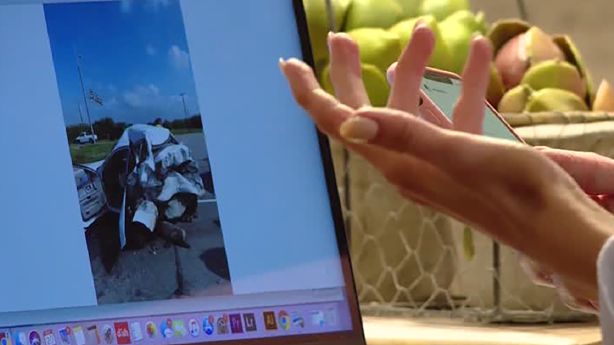 Jenkins, whose father was seriously injured in a crash, scours Instagram for evidence of phone use while driving.

She then sends a private message to those who appear to have posted stories and videos from behind the wheel.

“This is super random because, I don’t know you, but I saw this IG story of you driving while Insta storying and I wanted to reach out,” her message reads.

“Distracted driving is so dangerous, my dad was almost killed by someone driving while on their phone. It’s a topic I’m super passionate about bringing awareness to. So far this year over 150 people have died on Utah roads alone due to distracted driving! I hope this inspires you to wait until you’re parked next time!”

Jenkins father suffered extensive injuries — including three fractured vertebrae and four fractured ribs — in a crash in Texas in April.

Jenkins said her dad spent two weeks in the hospital and eight weeks in a wheelchair.

The 26-year-old said she increasingly receives tips from others on Instagram about those who post in settings where they could be distracted behind the wheel.

Jenkins said the reaction from those she messages tends to be positive, though not everyone is receptive.

“It was absolutely, like, mind-blowing to me that someone took it as far as was taken yesterday,” Jenkins said.

She said she planned to continue to spread her cautionary message and hoped it would soften hearts and minds to the potential perils.

“The more I talk about it and the more awareness I bring to it — it’s making a difference,” Jenkins said.