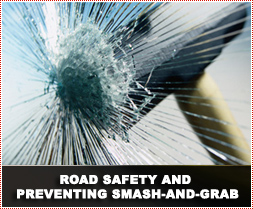 Road Safety and Preventing Smash-and-Grab
Introduction and Definition
Crime and criminal activity require from South African motorists alertness and caution to more than only other vehicles.
Even though progress has been made in fighting hijackings and vehicle theft, there has been an increase in theft from vehicles. Many of these are what can be defined as “Smash-and-Grab”.
In this section, we would like to discuss the crime of smash-and-grab in more detail and offer recommendations to motorists on preventing this sudden invasion of privacy and likely loss of possessions.