The 2010s: A Decade of Ups and Downs in Trucking 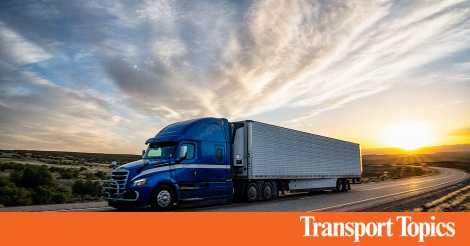 As we close 2019, we are also wrapping up a decade. While we normally look back at the year that was, it also seems like a good time to review the past 10 years. What better way to do that than to look back at the front pages we produced for the final issue of Transport Topics each year from 2010 to 2018? What was on the trucking industry's mind as we put a bow on each of those years? Let's dive in.

Truck sales were rising, but the average price of a gallon of diesel was at a two-year high, and the trucking industry and the economy as a whole were still recovering from The Great Recession. By the end of 2010, the industry was finding its footing as the demand for freight hauling increased. But executives were worried that sweeping new safety and environmental regulations would limit new entrants into trucking and discourage expansion of other companies. At the Management Conference & Exhibition in October, former American Trucking Associations President Bill Graves said, "These are game-changing times."

Driver turnover was increasing, and experts said the primary reasons were higher freight volumes and tighter regulations. But trucking executives got good news on sales, as 2011 was the best year on that front since 2007, with the first 11 months of the year seeing an increase of 57.7% over 2010. Industrywide, the economy was slowly growing, allowing fleets to put trucks back on the road and carriers to raise freight rates. A new hours-of-service rule was under debate, and in Congress, lawmakers mulled how to best pay for the maintenance of roads and bridges. Regarding safety, the Federal Motor Carrier Safety Administration implemented the Compliance, Safety, and Accountability system (CSA). CSA scores are now the industry standard for measuring the safety of fleets and drivers. Also, trucking began to grapple with the idea of electronic onboard recorders and how to best integrate new technologies.

With diesel above $4 per gallon for much of the year, the trucking industry was excited with the prospect of natural gas as an alternative fuel. It was the main topic discussed at the Mid-America Trucking Show in March and at the ATA Summit on Natural Gas in Trucking in November. "Given the rapid technological advancements in natural gas extraction methods and vehicle technologies, coupled with exceedingly attractive pricing, we are truly on the cusp of a potentially revolutionary change in the trucking industry," former ATA Chairman Michael Card said at the summit. Meanwhile, truck sales were falling as a result of uncertainty over U.S. fiscal policy, but tonnage rebounded in November after a decrease in October due to the effects of Superstorm Sandy.

Freight hauling increased over the course of the year, but a partial government shutdown dampened the mood of trucking executives in October. Graves said Republicans "seriously mishandled" events leading up to the shutdown. He also criticized legislators for not taking action to fund infrastructure. Meanwhile, ATA and the Minnesota Trucking Association sent a letter to FMCSA proposing a pilot program to study the relationship between safety and flexibility in using sleeper-berth breaks. They argued that the rule requiring eight straight hours in the sleeper, plus a separate two consecutive hours either in the sleeper, off duty or any combination of the two, did not fit truckers' schedules.

As 2014 drew to a close, all eyes were on Congress, President Barack Obama and the new hours-of-service law. A change to the restart provision that was in effect since July 1, 2013, had drawn the ire of ATA and others in the industry. Sen. Susan Collins (R-Maine) led the effort in Congress to include a restart suspension that would run through Sept. 30, 2015, and a bipartisan group of lawmakers supported her efforts. "We have known since the beginning that the federal government did not properly evaluate the potential impacts of the changes it made in July 2013," Graves said. Elsewhere, it was a busy year for trucking. A strengthening economy boosted demand for freight hauling and thus profits for companies, which then rushed to buy new tractors and trailers to keep pace. Truck sales had their best November in three years and topped 20,000 in September and October. FMCSA Administrator Anne Ferro, at her post since October 2009, resigned in August to become CEO of the American Association of Motor Vehicle Administrators.

This was a historic year for trucking. In our Year in Review story, we wrote, "Historians may look back at 2015 as the most important year for the U.S. trucking industry since deregulation in 1980." What made 2015 so significant? A long-term highway bill was finally passed by the govenrment, which also delivered a final rule mandating the use of electronic logs. The industry also began to look to the future, with the government laying out suggested standards through 2027 for greenhouse gas emissions. Freightliner debuted its autonomous-driving Inspiration truck, and technologies and techniques such as automatic braking and platooning seemed closer to reality. Meanwhile, the average price of diesel was ending the year under $2.40 per gallon, more than 70 cents below where it started 2015. The year drew more debate about the hours-of-service rule. The suspension of the restart provision carried into 2016 as Congress asked FMCSA to document how the 2013-14 version of the HOS restart would affect safety, operator health, driver safety and work schedules. "Congress has seen fit to demand that FMCSA ‘show its work,’ before imposing unnecessary and onerous restrictions on the use of the 34-hour restart by commercial drivers,” Graves said in Decmeber.

The year culminating in the election of President Donald Trump saw generally slow growth for freight carriers, but it ended with a proposed $1 trillion infrastructure plan championed by the president-elect. Tolling advocates were hopeful Trump's plan, which was to be partially funded through private investors, would spur the implementation of tolls along busy freight corridors. In July, Chris Spear succeeded Graves as president of ATA, ushering in a new period of industry engagement on issues such as automated driving and an agenda focused on trade policy, tax reform and funding for infrastructure. Class 8 sales in November — their lowest for that month since 2012 — continued a 2016 trend of year-over-year declines. Also, driver pay grew in the third quarter at the lowest levels in seven years.

As the year concluded, trucking executives feared that the Dec. 18 federal deadline for adoption of electronic logging devices would put pressure on an already tough driver market. However, they alsowere hopeful that Trump's promises to reduce taxes, cut back on business regulations and set new terms for international trade would spur economic growth as the new year began. Along those lines, the industry was seeing positive momentum regarding Class 8 sales. November topped 17,000 units, the third consecutive month that mark was passed, and after January through June saw year-over-year declines, July through November witnessed increases. On one issue, though, there was little movement: infrastructure funding. But the president and Congress said they were finally ready to debate the $1 trillion plan once 2018 kicked off.

As predicted, Trump's economic policies did kick-start the trucking industry. Thanks to a lower corporate tax rate, investment took off, hiring increased and freight volume soared domestically and internationally. Trump signed the United States-Mexico-Canada agreement, setting the stage for future trade deals with the European Union and China. However, no agreement was reached on Trump's infrastructure package. Elsewhere, Class 8 sales went over 20,000 units in November for the sixth consecutive month. By the end of November, year-to-date sales were up 32.1% compared with 2017. Tonnage also continued to grow, with a 0.4% increase in November even after a big spike in October. ATA Chief Economist Bob Costello said of the increase in tonnage, “It was likely due to some continued pull forward of shipments from China due to the threat of higher tariffs, as well as solid retail sales last month. With continued strength in November, tonnage growth is on pace to be the best year since 1998.”

If trucking years could get reviews, this one would probably be "mixed." On the one hand, FMCSA listened to drivers when it came to the HOS rule, resulting in proposed flexibility for the way drivers use their 30-minute rest breaks and how they divide their time in the sleeper berth. Also on the regulatory front, the long-awaited ELD mandate became law Dec. 17, with the two-year exemption for AOBRDs reaching its expiration date. Inspectors did not offer a "soft enforcement" grace period. FMCSA also stepped up its efforts to enhance safety in the industry, encouraging drivers and carriers to understand and register in a federal Drug and Alcohol Clearinghouse, which is a database of drivers who fail or cheat on their drug tests. But it also extended by three years the date for state driver's licensing agencies to comply with certain requirements. On the other hand, freight volume was down in trucking after a bountiful 2018. In 2019, carriers found themselves with an abundance of capacity and fewer loads. Conditions were made worse by a lengthy trade dispute between the United States and China and the decline of U.S. manufacturing. On the government front, it was a frustrating year for infrastructure advocates, who saw a $2 trillion infrastructure package collapse in May as Trump and Democrats could not reach an agreement on funding. A replacement deal never got done.

In all, it has been a memorable 10 years. Hours-of-service rule debates. The ELD mandate. Alternative fuels and automous vehicles. As we greet the 2020s, the topics at the forefront of trucking likely will remain the same, but the nuances will shift as new movers and shakers and emerging technologies define the industry.