Is it time to make a fresh start with your driving? 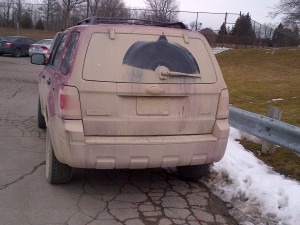 As written for The Insurance Hunters. Please visit their blog.

Mmm, fresh! I love the smell of fresh baked foods, fresh air and freshly cut grass. There’s something to be said about starting new. Many people make New Year resolutions at the beginning of the calendar year with the hope of making changes that will be positive in their life. With that being said, I’d thought I would offer some suggestions for drivers who would like to start new skills during this calendar year.

The first suggestion I would like to offer is driving attitude. Many drivers are less patient than they could be while driving. Instead of getting annoyed with other road users, take a deep breath and ask yourself what is it about their actions that goes against what you’re doing. Does it really affect you as much as you think it does? After having this change of attitude over a month or so, you’ll be a much calmer driver, making better driving decisions because you’ll be thinking clearer.

Another new tip to offer is to become more of a proactive driver. Some people are chronic late comers. They leave things to the last moment. If this sounds like you, try these tips. Once you know how long your commute will be, leave early enough to give yourself an extra 10 or 15 minutes for travel. If you get to work 10 or 15 minutes early, you’ll have time to grab a coffee and relax before starting your work day. If you need that extra 10 or 15 minutes during your commute, you won’t be tempted to rush and make poor driving choices because you’ll be late.

Something that many drivers could benefit from making a new start is cleanliness. I’m not talking personal hygiene, I’m talking the vehicle. Securing loose items from inside the vehicle means less distractions. Items stuffed under the driver’s seat can become dislodged and can roll under the brake pedal. That may prohibit the driver from braking firmly in an emergency. Loose items such as wrappers and paper can blow around on a windy day in the spring and summer with the windows down, so put those away before driving so they don’t take your attention away from the driving task.

The last suggestion for a fresh start this year I would have to say should be slowing down sooner when approaching red lights or stopped traffic. Early slowing has many benefits for drivers. It saves fuels, saves brake wear and gives you the feeling that you’re going someplace. That feeling will often help you feeling positive as a driver and become less stressed on your daily commute.

These are just a few suggestions to get you started off in the New Year. Will you use them? Will you keep them longer than a week? I hope so, but don’t limit your fresh start to just these few. Make the entire year your year of safe driving.