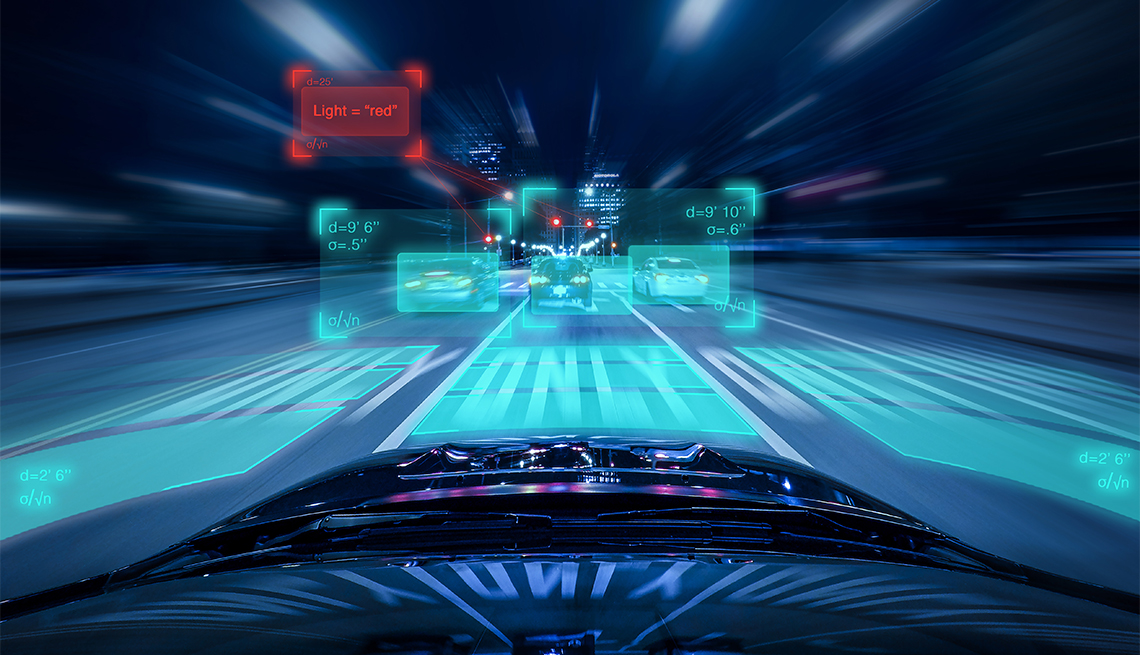 High-Tech Car Safety Features Highlighted at CES Coming Soon
We're entering the era just before autonomous cars
by Christina Ianzito, AARP , January 8, 2020 | Comments: 0
Busakorn Pongparnit/Getty Images
Each new generation of cars will be more adept at telling us what we're doing wrong in the driver's seat — until our vehicles finally take the wheel.
That much is evident at CES, the annual consumer electronics show that has flooded Las Vegas this week with more than 170,000 technology-focused attendees soaking up the newest innovations . Among the flashy car tech highlighted here are the latest in advanced driver-assistance systems, safety upgrades that should lead to fewer crashes while continuing to skip us farther down the road toward self-driving cars.
" Fender benders will very soon be a thing of the past,” says senior principal engineer Jack Weast of Intel, the Santa Clara, California-based parent company of the driver-assistance software developer Mobileye in Jerusalem. An estimated 20 to 30 percent of cars now have the systems, and “in pretty short order, you're not going to be able to buy a car without these kinds of safety capabilities,” Weast says.
On Wednesday at CES, U.S. Transportation Secretary Elaine L. Chao announced that the federal government is collaborating across agencies to support and set standards for automated vehicle technologies. Officials are calling it “Automated Vehicles 4.0.”
But in the meantime, you'll be seeing a slew of new high-tech safety features enter the market. Here are a few you might find in your next car, according to experts at CES:
• Even more advanced driver-monitoring systems. The DriverSense system from another Israeli company, Eyesight Technologies, uses a camera to analyze drivers’ facial features, including blink rates and yawning, and sends an alert when they need to pay more attention. Its newest version can detect when a driver is smoking; some countries don't allow smoking while driving.
DriverSense has been on the fast track for inclusion in European vehicles since the European Commission mandated all new cars include driver-monitoring systems along with other advanced safety features such as speed limiters by 2022, says Liat Rostock, Eyesight's vice president of marketing.
Eyesight Technologies
The DriverSense safety system looks at facial features — this driver is in a car with a steering wheel on the right and talking to someone in the passenger seat — to determine whether a driver has his eyes on the road or is getting drowsy.
Different versions of face-scanning driver-safety technology already can be found in some U.S. cars. The Cadillac CT6 has Super Cruise, a feature that works with adaptive cruise control — slowing down when the car in front of you slows down, for instance — to allow drivers to keep their hands off the wheel on certain compatible highways.
But that system works only if lane markings are clear, not covered with snow, or faded from sun or heavy use.
The Driver Attention Camera system uses a camera on the dashboard to determine whether the driver is paying attention based on its assessment of his or her eye movements. If the driver looks away from the road for more than a few seconds, a green light at the top of the steering wheel turns on.
One popular AARP driver safety program focuses on how to use your new tech
Subaru's driver-assistance system, Driver Focus, found in several of the company's 2020 models, uses an infrared LED and a camera to monitor drivers’ faces to make sure their eyes are on the road. If they look away for too long, a buzzer sounds.
• More precise road monitoring. While most cars with advanced driver-assistance systems today use cameras or radar to detect obstacles, the more advanced systems involve light detection and ranging, better known as lidar , laser technology that can “see” what's around your car with stunning accuracy, says Chief Finance Officer Ransom Wuller of Pleasanton, California-based AEye. His company develops vehicle perception systems; AEye's is called iDAR.
AARP at CES
AARP reporters and videographers are at this week’s Consumer Electronics Show in Las Vegas, checking out technology that can help people stay safe and age in place.
Check out our coverage every day this week on our Personal Technology  page and Facebook .

With lidar, which is still too expensive to go mainstream, “we can tell you within a centimeter how far away a stop sign is,” he says.
Intel's Mobileye has a new enhanced Lane Keeping feature that uses mapping along with regular driver-assistance sensors. If you're in a residential neighborhood with no lane markings or if markings are obscured by snow or mud, “your car still knows where the lane is, and will always be able to keep you within it,” Weast says. He adds that most of the U.S. already has been mapped for this capability.
• Vehicle-to-everything communication, shortened to V2X. One day your car's system will be able to receive and analyze information from other cars, devices and networks about what's happening on the road. If you're waiting to turn left but can't see whether cars are headed your way in the lanes of traffic facing you, your vehicle would be able wirelessly to exchange information with others to determine whether you're at risk of a crash, Weast says.
This long-discussed and -researched technology is not yet a reality, but auto safety advocates including the National Highway and Traffic Safety Administration support it. It's often cited as a key way to make driving so safe that no one dies in a crash — a concept known as Vision Zero.
• No more crashes. That's what should happen when we eventually get driver-assistance systems that are so advanced that “even if you want to drive into a ditch, the car won't let you,” Weast says.
More on Vehicle Technology