Fight against distracted driving must take place on many fronts 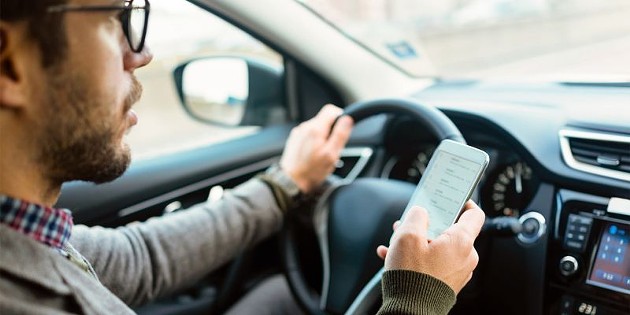 CLOSING the gap between "knowing the right thing to do" and "doing the right thing." That’s the challenge we face in addressing the deadly problem of distracted driving, according to Dr. C.Y. David Yang. He’s executive director of the AAA Foundation for Traffic Safety, a "not-for-profit, publicly supported charitable research and education organization" founded in 1947.

Almost 75 said they support laws that prohibit holding and talking on a phone and about 88 percent favor laws against reading, typing, or sending a text or email while driving.

Nonetheless, “more than half of drivers report having driven while talking on a handheld phone at least once in the past 30 days.”

In addition, 41.3 percent reported reading texts or emails while driving and 32.1 percent admitted typing a text or email while driving. And the true numbers are probably higher, as it is generally acknowledged that distracted driving is underreported

Yang also discussed the results of an expansive review of current scientific evidence on the effectiveness of existing and emerging methods for reducing distracted driving, released by the foundation last month.

The conclusion? “There is no panacea,” he said. No single countermeasure has produced significant results on its own.

Instead, Yang recommended a “holistic and systemic” blend of “education, enforcement, engineering, and behavior adjustment.”

While he said there is some promise in crash avoidance systems in newer vehicles, he warned that drivers can become too reliant on these technologies.

What’s more, Yang said a different kind of in-car technology is compounding the problem of distracted driving. The foundation’s analysis of “infotainment” and navigation systems in the 30 most popular vehicle models in the US found 76 percent “generated a high level of demand for attention from drivers.”

This underscored another of his messages: While phone use has been the target of many countermeasures, other distractions are present in cars and on our roadways.

Still, phones are unique in that legions of software developers and device designers have worked tirelessly and have largely succeeded in making them nearly impossible to put down.

The next speaker to take the dais, Mike Pitcher, offered a revealing anecdote to explain the “stickiness” of phones. He recounted driving in Atlanta and seeing someone behind the wheel with an iPhone in one hand and an iPad in the other.

Despite being personally and professionally committed to combatting distracted driving, his first impulse was to grab his own phone and snap a photo.

During his time as CEO at LeasePlan, a fleet management company with 1.8 million vehicles in more than 30 countries, Pitcher implemented a policy that prohibited phone use in company vehicles and banned company phone use in all vehicles.

He said his sales staff initially balked at the policy. How could they always be closing if they were unable to immediately respond to customers’ calls, texts, and emails wherever they were?

Pitcher was unmoved and was vindicated in the end. After the policy was enacted, crashes and associated costs declined, and productivity increased.

He also stressed that although the primary focus is on distracted driving fatalities, we must also recognize the life altering injuries often sustained by those who survive.

This is a sobering reminder, especially for those who travel by biking, walking, or using wheelchairs on streets that offer them no protection.

Pitcher was followed by Brian Mixon, a sergeant with the Perry Police Department and a former law enforcement liaison for GOHS.

He described a mandate, announced by a sheriff in middle Georgia, that went even further than LeasePlan’s policy. Any deputy caught using a phone while driving a patrol vehicle would be fired immediately — even though police officers, firefighters, and other emergency responders are exempt from Georgia’s hands-free law.

Mixon, who could easily make it on the stand-up circuit if he wasn’t often working night shifts, used humor to talk about responding to the carnage caused by distracted driving and the toll it takes on police officers. And the frustration they feel when they see the same dangerous behavior again and again.

He told the story of pulling over a motorist who continued to talk on her phone even after he approached. When he got out his book and started entering citations, she finally rolled down her window and asked what he was doing.

“I’m writing tickets and I’m going to keep on writing them until you put that phone away,” he said.

She told the person on the other end of the call, “I think I better call you back later.”

Despite the alarming statistics and lack of a clear solution, Mixon urged law enforcement officers, educators, and advocates to keep up the fight against distracted driving. If we give up, he asked, what happens then?