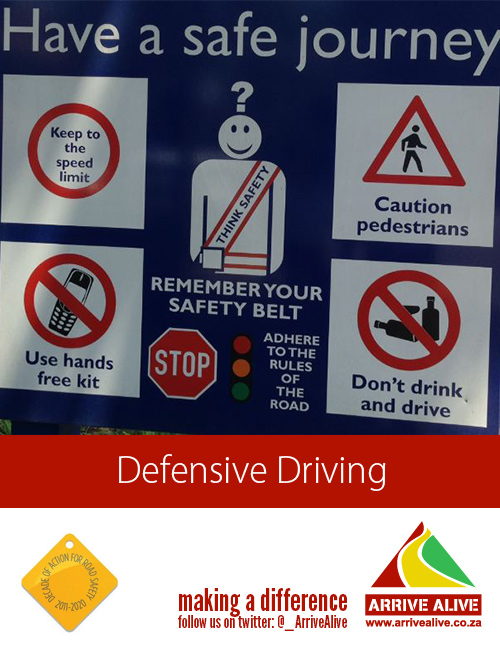 January 23rd, 2020 – On average, more than 40 people die on South Africa’s roads and a further 20 people are left permanently disabled every day.

The most dangerous times on our roads are holiday periods. “This is highlighted by the recently released preliminary festive season stats, which show 1,612 road deaths between 1st December and 8th January – a 5% increase over the same period last year,” says Kirstie Haslam, partner at DSC Attorneys.

With 90% of all fatalities caused due to human error, she says before you set off on your next road trip, near or far, review these ten simple steps for road safety.

1. Is your vehicle fit for the road?

Whether you’ll be travelling 150 or 1,500 kilometres, it’s important to check that your vehicle is roadworthy. Examine lights, indicators, windscreen wipers, brakes, steering, seatbelts, exhaust, tyres, oil and water. Service your car once every 12 months or every 10,000 kilometres, whichever comes first.

If you’re driving a long distance make sure you plan the route using a GPS navigation tool and/or road atlas. Avoid driving in the dark when visibility is poor.

Stick to major roads, plan refuelling stops and places to have a break every two hours. Conduct quick inspections – especially of tyres – at each stop.

Let a friend or family member know your route. Keep that person informed of your progress and when you’ve arrived at your destination.

3. Buckle up – even on the shortest trips

Wear a seatbelt at all times and make sure passengers wear their belts too.

Seatbelts prevent 99% of occupants being ejected from a car during a crash. The risk of being killed in a crash is also prevented by up to 60%.

South African law requires each passenger to wear a seatbelt, and it’s the driver’s responsibility to make sure passengers remain strapped in throughout the journey. Fasten the lap and shoulder belt across the hips. Don’t place the shoulder belt under the arm or across the face or neck.

Children under the age of 12 should travel in the backseat, either buckled up or in a car seat or booster seat, depending on the child’s age, height and weight.

Infants under 12 months should be strapped into a rear-facing car seat in the back of the car. This ensures that in the event of an accident the impact is on the seat and not the infant. Never travel with a child on your lap.

Remember: clunk-click even on the shortest trips.

Even a single alcoholic drink can impair your ability to drive safely, especially judging distance and speed. The best option is to avoid drinking alcohol altogether if you’re driving.

How much does that mean you can drink and stay under the limit? The straight answer is that it varies from person to person depending on weight, gender, metabolism and age.

Alcohol causes drivers to drive faster, be overconfident and less likely to observe traffic signs and other road users, putting everyone at risk.

Drunk driving can result in killing or injuring someone, a criminal record, imprisonment and legal costs.

If you want to drink (or drink without having intended to) appoint a designated driver, take public transport or call a cab or Uber.

Stay within the legal speed limit at all times. Just because the speed on a road is 120 km/h doesn’t mean you have to drive at that speed.

6. Never use a cell phone or device while driving

Distracted driving – particularly conversations on cell phones and texting – is estimated to be a factor in 25 to 50% of all road traffic accidents.

Using a cell phone while driving is both illegal and dangerous. Keep both eyes on the road and hands on the steering wheel.

Guard against being distracted by setting any devices to silent or putting them in a bag out of sight (and reach) during the journey.

Assume other road users are bad, aggressive drivers and choose to drive defensively. Be cautious and courteous. And don’t take risks.

Be visible by driving with your lights on and only overtake when it’s absolutely clear and safe to do so.

Don’t drive in the blind spot of other vehicles and keep a three-second distance or longer, especially at night or in wet or foggy conditions.

Stay calm, collected and don’t retaliate if a driver gets aggressive.

8. Look out for danger

Being safe on South African roads involves being alert for pedestrians and cyclists, as well as criminal threats, such as hijacking and smash-and-grab.

Be especially alert when approaching robots and intersections.

Always place possessions out of sight in the boot and never leave items like cell phones and wallets on the car seat or in plain sight while driving.

If you get a flat tyre or your car breaks down, stop the vehicle and turn the hazard lights on. Never attempt to make a repair on a busy road.

If you can, pull over as far as possible from the road to the hard shoulder and make your car as visible as possible to other drivers, using a warning red triangle if you have one.

Remain in your vehicle with the doors locked and windows up.

If you’re worried that your car might be hit by another car, walk carefully to the side of the road. Ideally, stay in the car. Do not flag down other drivers.

Call for emergency assistance, stressing the fact that you’re vulnerable.

Always have emergency numbers programmed on your cell phone.

Driving when you’re tired or drowsy is estimated to be a primary cause in more than 20% of road fatalities. The more severe the crash, the more likely it is that the driver or drivers were fatigued.

Don’t drive when you’d normally be sleeping, and make sure you have a few good nights’ sleep before hitting the road for a long journey.

In the event of an accident If you’re involved in a road accident, establish the extent of injuries to establish if medical attention is required. Check the damage to vehicles to see if emergency services need to be called.

Take photos of any vehicles involved in the crash. Exchange names, addresses, telephone numbers and ID numbers of everyone involved.

Report the accident at a police station – you will need a case number in order to be able to file a claim with your insurance company.

Haslam says that anyone seriously injured in an accident on South Africa’s roads – including drivers, passengers, motorcyclists, cyclists and pedestrians – can claim compensation from the Road Accident Fund (RAF). But, she adds that filing a case on your own may not get you the best outcome.

“It is better to employ the services of an expert personal injury law firm, which specializes in road accident claims,” she advises. “Working on a no win, no fee basis, they will be able to assess your claim, help prepare supporting evidence and represent you in legal proceedings, giving you the best chance of receiving the compensation you deserve.”