Distracted driving can be a deadly action 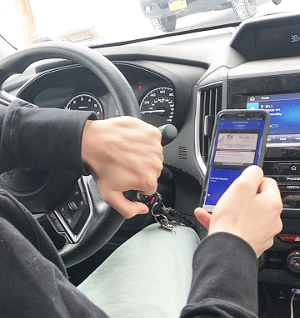 FINGER LAKES -- Despite the fact that New York state is one of the few states where distracted driving accidents are trending down, roughly 1,000 people a year still die as a result. To help keep those numbers down, local law enforcement agencies are working on enforcement education. "There are so many things that fall into distracted driving, not just looking at a handheld device; a navigation system built into the car, other passengers in the car can also distract you. It is a big problem, some of the things [have been] around forever, then technology improves and new technology seems to make it worse. But there is not a day that goes by that you don't see somebody holding the phone up when driving," said Bill Yessman, Schuyler County Sheriff. Contrary to popular opinion, Yessman said talking on a cell phone isn't the only thing that is illegal. "You cannot have your phone in your hand to text, talk, to play music or set the navigation. While operating a vehicle you cannot have anything in your hand, even a navigation system. Even if you have a phone on speaker, it has to be set down in the car and it can't be in your hand. Most cars come with bluetooth capability anyway," Yessman said. Distracted driving isn't just about cell phones, though. Anything that results in you taking your eyes off the road falls under the definition of distracted driving. "We had a very serious horse and buggy accident three years ago where people were catapulted from the buggy but lived. The driver of the car had taken their eyes off the road to pick up something that had fallen off the passenger seat and crashed into the back of the buggy," said Ron Spike, Yates County Sheriff. To help realize how big a deal taking your eyes off the road is, David Orr, a professional engineer and director for the Cornell Local Roads Program, recommends people do an experiment the next time they sit as a passenger in a car. "Close your eyes for five seconds, then open them and realize how much everything around you has changed," Orr said. This is important to note, he said, because highway engineers design for two and a half seconds of reaction time. "When texting, according to research, that adds five seconds to any reaction time. In the engineering world we called it perception reaction time, but that's the idea from the time something happens until you detect it and put your foot on the brake," Orr said. As to why state distracted driving deaths are down, Orr said he couldn't say for sure, but said that increased state emphasis and local law enforcement most certainly has helped. "There is a lot more emphasis on enforcement, periods that the state sets for enforcement of distracted driving," Yessman said. These periods of enforcement are no secret, Yessman said, and are often advertised in advance. Distractions go beyond modern devices though and include changing the radio, taking a drink, eating and more. "Some researchers even say it's impossible to multitask while driving. So keep that in mind, even hands-free driving some people say is just as dangerous. Don't do hands free when driving in traffic or bad weather," Orr said. Several months ago Yessman said that he thought a driver was intoxicated due to erratic driving but after being pulled over it turned out the driver was merely trying to eat breakfast. "We recommended that he eat while sitting because he certainly couldn't eat while driving," Yessman said. While distractions are everywhere, Spike noted that sometimes drivers seem to distract themselves on purpose. "I know there was a concern of people taking selfies while driving, obviously that is distracted driving. So it's something that is preventable but we have to remind people that they can cause an accident pretty quickly and it has happened in the past," Spike said. Spike added that many distracted driving accidents tend to happen at intersections where drivers drive through red lights or into the back of a vehicle stopped at a red light. "It's the same old story, if you get a phone call or text that you feel is important pull over to where it is safe," Yessman said. Orr agreed, and said it is always smart to be cautious when driving. "Everybody should get home every single day."