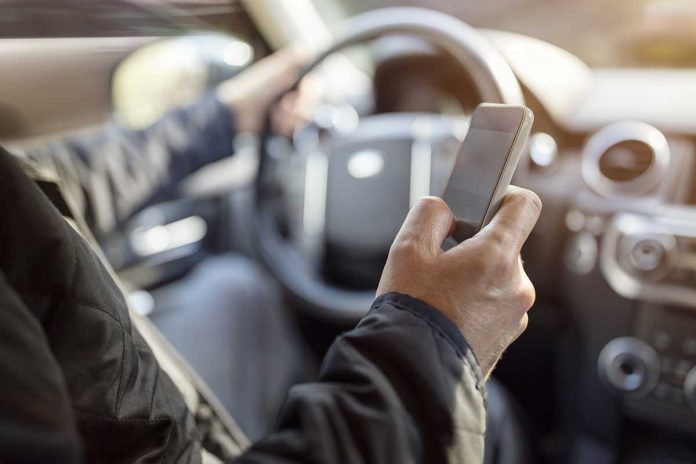 ONTARIO – One year out from new regulations and penalties instituted in Ontario as of January 1, 2019, distracted driving still remains a serious concern on Ontario roadways.

There were 55 distracted driving-related deaths on OPP patrolled roads in 2018—that compares to 48 deaths linked to impaired driving over the same time period, according to Manitoulin OPP Community Services Officer Marie Ford.

“It’s a situation we take very seriously,” noted Constable Ford. “In addition to our campaigns, we actively target distracted driving—we are always on the look out for it.”

Statistics from 2013 show that in Ontario, deaths from collisions caused by distracted driving doubled over the three previous years, with one person being injured in a distracted-driving collision every half hour. In fact, a driver using a phone is four times more likely to crash than a driver focusing on the road.

“The OPP expects every driver—it’s their responsibility—to pay attention to their driving,” she said.

Constable Ford noted that the OPP has seen a marked increase in citizen calls reporting erratic driving. “It used to be that they thought the driver might be impaired,” she said. “Now people are suggesting that people are on their phones.”

Distracted driving laws apply to the use of hand-held communication/entertainment devices and certain display screens. While you are driving, including when you are stopped in traffic or at a red light, it is illegal to use a phone or other hand-held wireless communication device to text or dial (you can only touch a device to call 911 in an emergency, and even then you are advised to pull over to safely call). It is also illegal to use a hand-held electronic entertainment device, such as a tablet or portable gaming console, to view display screens unrelated to driving, such as watching a video program or a GPS device (unless securely affixed to your vehicle) unless you are only using voice commands.

You are allowed to use hands-free wireless communications devices with an earpiece, lapel button or Bluetooth. You can view GPS display screens as long as they are built into your vehicle’s dashboard or securely mounted on the dashboard.

Despite plenty of Facebook memes and announcements citing otherwise, eating, drinking, grooming, smoking, reading and reaching for objects are not part of Ontario’s distracted driving law—but you should avoid those distractions as well, as you can still be charged with careless or dangerous driving should the situation warrant.

In Ontario, deaths from collisions caused by distracted driving have doubled since 2000.

You can use a hands-free device such as one connected by Bluetooth, but only to turn that device on and off. Even then a dash-mounted (or otherwise) device such as a phone or GPS can only be used if it is secure, that means not moving around while driving.

The penalties can be strict and vary depending on what kind of licence you are operating the vehicle under. If you have an A, B, C, D, E, F, G and/or M licence, your first conviction can net you a fine of $615 (if settled out of court) or a fine of up to $1,000 if a summons is received or if you fight the ticket in court and lose. You will also lose three demerit points and receive a three-day suspension.

On a second conviction there is a a fine of $615, if settled out of court, a fine of up to $2,000 if a summons is received or if you fight the ticket in court and lose, and a further six demerit points and a seven-day suspension.

If you are convicted a third time (and any following convictions) there will be a fine of $615, if settled out of court and can receive a fine of up to $3,000 if a summons is received or if you fight the ticket in court and lose. You will also face a further six demerit points and a 30-day suspension.

For novice drivers, things are even more severe. If you hold a G1, G2, M1 or M2 licence and are convicted of distracted driving, you’ll face the same fines as drivers with A to G licences. But you won’t receive any demerit points. Instead of demerit points there are longer suspensions: a 30-day licence suspension for a first conviction; a 90-day licence suspension for a second conviction; and cancellation of your licence and removal from the Graduated Licencing System (GLS) for a third conviction.

As a novice driver, you will only get your licence back by starting over in the Graduated Licencing System program.

If you endanger other people because of any kind of distraction you may also be charged with carless driving. When convicted of careless driving, you may receive six demerit points fines up to $2,000 and/or a jail term of six months. As well, you can face a licence suspension of up to two years.

Should the circumstances be serious enough, you could be charged with dangerous driving, which is a criminal offence that carries even heavier penalties, including jail terms of up to 10 years for causing bodily harm or up to 14 years for causing death.

Then there is the insurance hit—often overlooked but very significant is the increase that can accompany being convicted of any of the above offences.

It’s just best to avoid taking any chances, there are no texts or other messages that are important enough to take the risks involved with distracted driving.

To avoid the temptations of distracted driving, turn off your phone or switch it to silent mode before you get in the car. Try putting it in the glove compartment (lock it, if you have to) or in a bag on the back seat. Before heading out, record an outgoing message that tells callers you’re driving and you’ll get back to them when you’re off the road. Some can block incoming calls and texts or send automatic replies to people trying to call or text you.

If travelling with a passenger, get them to take the call or respond to a text for you. If you must respond or have to make a call or send a text, carefully pull over to a safe area.

Turn off notifications that tempt you to check your phone.

Let’s all make distracted driving as off limits as impaired driving in 2020 and beyond.