Troy High School focuses on how to prevent distracted driving 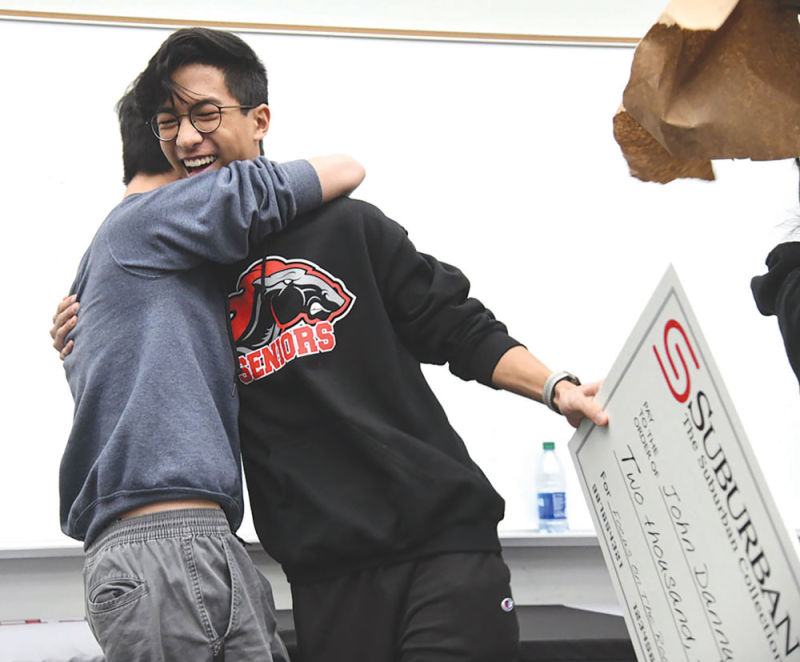 TROY — Richard Li and John Dannug, friends and seniors at Troy High School, said they had to throw the dice “a ridiculous number of times” before it came up snake eyes.

It was a crucial scene in the video they produced for The Suburban Collection’s “Focus on the Road” distracted driving public service announcement contest.

Li and Danmug won first place in the contest, earning a $2,500 cash prize, for their video, titled, “Don’t Take a Chance.” They received the prize money at Troy High School Jan. 14.

They produced the video on their own time, not for class credit.

“It was a good opportunity,” Li said. “We made a good creative team.”

Danmug said their video tells people to not take chances that put themselves or others at risk.

The 35-second video features a teen driving on a snowy street and texting as someone walks across the street. Dice are rolled, with the ending voiceover warning: “Don’t take a chance — focus on the road.”

They said they plan to save the money for college.

According to a press release, “the goal for students is to conceptualize and produce a video that embodies how dangerous it can be to drive distracted. The Suburban Collection reviews the videos against predetermined judging criteria focused on concept, creativity/originality, message content, impact and production quality to select three winners. This year, The Suburban Collection received more than 110 entries.”

“We saw the need to fix the problem,” said Dan Fuoco, of The Suburban Collection, who was on hand to present the awards. “These are the newest drivers. We are trying to solve the problem right at the core.”

The team of Jennifer Won, Carol Zhang and Shannon Li produced a 35-second video titled, “Make it Alive,”  and they did it “just for fun,” Zhang said.

Their video depicts highpoints in a student’s life, then rewinds the tape to depict what would happen if someone texts and drives, ending with the voiceover, “Make it alive. Don’t text and drive. Focus on the road.”