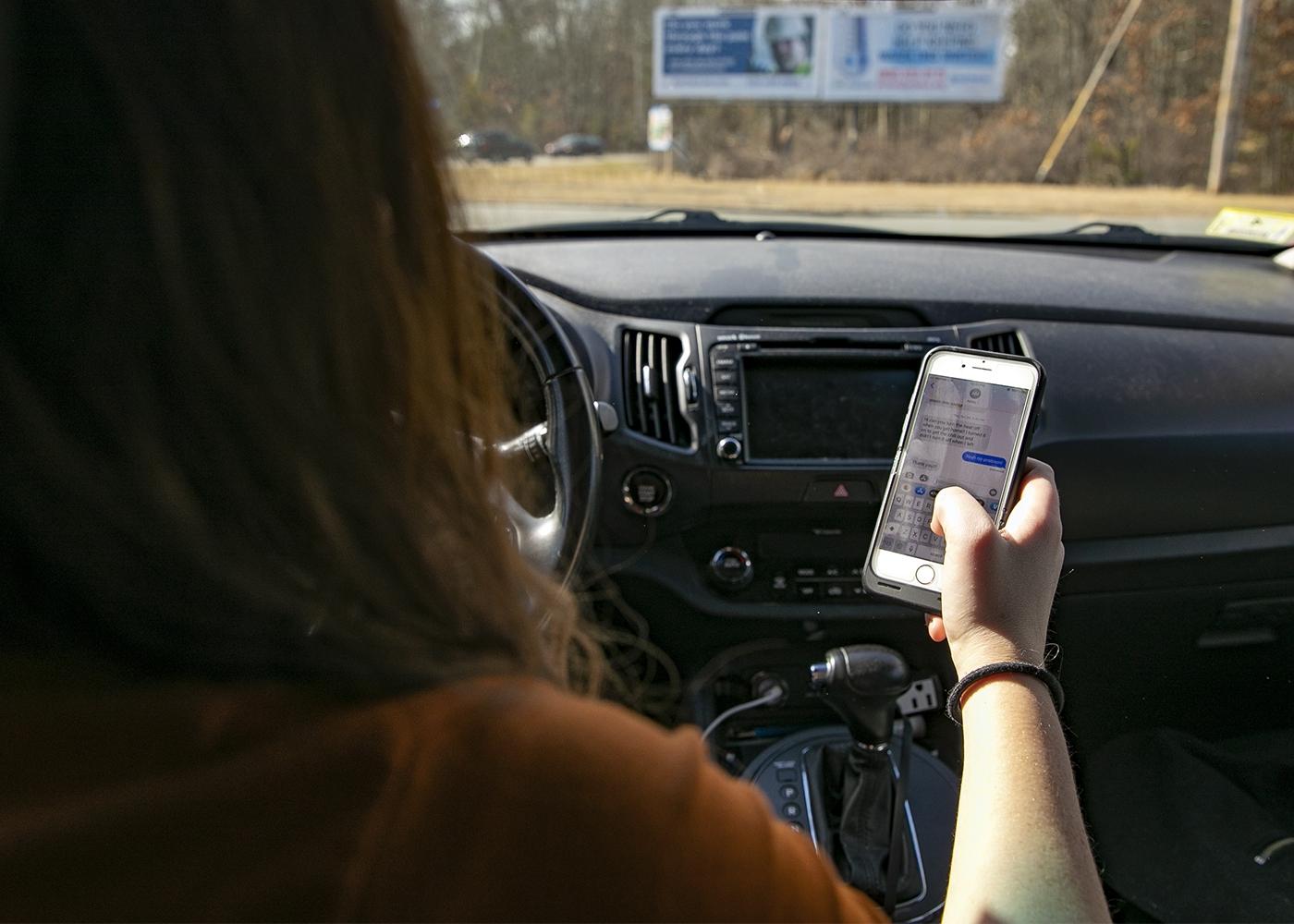 Beginning Sunday, drivers will no longer be able to use hand-held mobile devices while driving, including to make telephone calls. It's called an Act Requiring the Hands-Free Use of Mobile Telephones While Driving — and police are hoping it reduces the number of distracted driving crashes.

Pamela Erlichman saw her life — and her infant daughter's life — flash before her eyes.

She was driving on South Street in Bridgewater a few years ago when she came to a bend in the road. Eyes straight ahead, with two hands on the steering wheel, Erlichman was negotiating the curve when another car started drifting into her lane.

"I saw she was absolutely looking down at her phone, not paying attention to the bend in the road," Erlichman said. "I saw what was about to happen, so I basically drove off the road into a cornfield to avoid her."

Erlichman, because of her attentiveness and quick thinking, was lucky that day.

We can deliver news just like this directly to your inbox. You can sign up for This Just In (a daily 7:30 p.m. newsletter with items we've posted that day), News Alerts (so you don't miss anything important) and more. It's customized to your preferences -- and it'll only take a few seconds.

Countless others — including Deborah Combra of Bridgewater, Jordan Cibley of Norton and Dennis McElhinney of West Bridgewater — have not been as lucky, either due to the alleged actions of other drivers who were using their phones while driving or even their own doing.

The deaths of those drivers — and the innumerable crashes attributed to distracted driving — are part of the reason drivers will be required beginning Sunday to put their phones down while driving. The new law — an Act Requiring the Hands-Free Use of Mobile Telephones While Driving — is about to go into effect.

"I believe the law is important in order to address the increase in distracted driving that we, along with other police departments, have seen an increase in," said Easton Deputy Police Chief Keith Boone. "My hope is to see less traffic crashes as a result as phone use in general has been a problem for many years."

The new hands-free driving law prohibits drivers from reading or viewing any images or videos, unless they are to help with navigation and the phone is mounted on the dashboard or windshield. It also forbids drivers from making phone calls that require holding the phone in your hand. Drivers must utilize technology such as Bluetooth, a stereo's auxiliary input or speakerphone to speak on the phone. The law also applies to cyclists.

Drivers are only permitted to touch their phones to active the device's hands-free mode or GPS navigation, and only when it is installed or properly mounted to the windshield, dashboard or center console "in a manner that does not impede the operation of the motor vehicle."

"I think it will make our roads safer," said Stoughton police Lt. John Bonney. "It brings everybody to a level playing field where, with texting, we're told at roadside, 'I wasn't texting, I was just dialing a phone number.' This will eliminate the gray areas of hand-held phone use."

The law hopes to deter drivers from using their phones by handing out hefty fines to those who are caught with a phone in their hand while driving. Beginning April 1, after a month-plus grace period in which police will only issue warnings for violations of the new law, a first-offense citation will result in a $100 fine; a second offense is $250, as well as mandatory completion of an educational distracted driving program; and a third offense will result in a $500 fine, an insurance surcharge and the required educational program.

West Bridgewater Police Chief Victor Flaherty said his department's goal will be to educate every driver seen with a phone in their hand during the grace period.

"We're going to do as much educating as we can for the next 30 or so days," he said. "My hope is that if we have a really strong month really keying in on it, handing out flyers, we'll get a lot of people talking about it. My guys will stop anybody that has a phone in their hands, explain the law and ask them if they'll program their phones to 'do not disturb.'"

Although the new law doesn't require drivers to put their phones in a do not disturb while driving mode, Flaherty said he believes everyone should do it and just focus on driving. The mode, which is available on both Apple and Android phones, silences notifications and temporarily blocks incoming calls and text messages when it senses that you're driving. One of the flyers the department plans to hand out to every driver stopped during the grace period will explain how to program a phone to that mode. The other flyer explains the new hands-free driving law.

In the past several years, the West Bridgewater Police Department has been ahead of the curve locally in trying to curtail distracted driving. Flaherty said he was inspired in late 2012 to start the stings after learning a traffic study that was performed in anticipation of the opening of Market Basket on Route 106 determined about 90 percent of crashes in that area involved a driver rear-ending the car in front of them.

The department has conducted more than a dozen distracted driving operations since 2013, resulting in over 1,000 citations to drivers.

And if you're planning to drive through West Bridgewater anytime soon, you probably want to think twice — or 100 times, for each dollar you'll pay on a first offense — about grabbing your phone while driving.

Still, some remain skeptical that local police departments will enforce the new law.

"It won't make a difference. Look at New Hampshire. They've had the law for some time now, yet driving around up there you'd never know," said Adam Wentworth of Taunton. "Just more feel-good pointless legislation. Nearly unenforceable as well, they can't see inside all vehicles."

Tina Rezendes, who lives in Brockton, fears the law could have the opposite effect of reducing crashes involving distracted driving.

"It's a good idea, however this could backfire with the people who just can't put the phone down," she said. "It may actually cause more accidents by people trying to avoid being caught on the phone while driving."

Leona Love of Middleboro said she is in favor of the new law and thinks police should enforce it at intersections by pulling up on drivers using bicycles and motorcycles.

"I think it's a great idea and can potentially save lives," she said.

And some say the penalties are certainly enough to scare them away from picking up their phones in the car.

"I don't use my phone driving, but I hear the word 'insurance surcharge,' I will never touch my phone again," said Katie Lawson of Brockton.

Drivers should expect increased patrols — at least initially — in light of the new law. Flaherty said his officers will be out in force, as did other local departments, and Massachusetts State Police Col. Christopher Mason said there will be "dozens of additional patrols," including some cruisers with two troopers so that one can act as a "spotter" to detect distracted drivers.

Although there will be a grace period for those found to be talking on their phones while driving, texting while driving is still illegal and drivers will be subject to citations during that period. And drivers under the age of 18 are already banned from using hand-held devices.

The state Department of Transportation says there were just 1,148 tickets issued in 2011 for texting while driving, but that number jumped to more than 6,000 tickets by 2015.

The National Highway Traffic Safety Administration says nearly 20,000 people died as a result of distracted driving in the United States between 2012 and 2017.

The National Safety Council estimates that 25 percent of crashes involve cellphone use and drivers using a hand-held cellphone are four times more likely to be involved in a crash as someone using a phone in hands-free mode.

A 2006 study comparing the driving of a person using a cellphone against someone who is under the influence of alcohol suggested the risk of being in a crash while using a cellphone was similar to the hazard associated with driving with a blood alcohol content at the legal driving limit.

"When driving conditions and time on task were controlled for, the impairments associated with using a cellphone while driving can be as profound as those associated with driving while drunk," the study, published in The Journal of the Human Factors and Ergonomics Society, states in its conclusion.

The new law in Massachusetts requires police to report data on hands-free driving violations, tracking the race, age and gender of those who are cited or just receive a warning. The information will be shared with the public.

The law does allow for public safety personnel and emergency first responders who are driving an "emergency services vehicle" and "engaged in the performance of their duties" to use hand-held devices.

It also allows a driver who needs to report a disabled vehicle, request medical attention, call the police or other emergency services or report a crash in the roadway to use a hand-held phone. But officials still encourage drivers to pull over before making an emergency call.

While local police say they believe the law is a step forward, some believe there are still far too many distractions drivers are subjected to — even if they aren't holding their phones.

"Overall, I still believe that having a phone secured to the windshield in front of you with a GPS on is distracting in a way. And look at these new cars — you have an 8-inch screen in front of you and all these push buttons," Flaherty said. "You're supposed to be driving."

Erlichman, who in response to her run-in with a distracted driver back in 2016 created a fundraiser that led to "Put it Down" signs being placed throughout town, is hopeful the new law will "accomplish what it's setting out to do."

"It's an epidemic, really, of people thinking they can multitask while driving. The number of accidents and people being killed while just trying to cross a street now is staggering. I'm personally nervous when my 14-year-old son goes to town and needs to cross in a crosswalk," she said. "I'm not worried about him — I'm worried about whether the driver going past the crosswalk is going to stop. Hopefully with this new law people will take it more seriously."

Senior reporter Cody Shepard can be reached by email at cshepard@enterprisenews.com. You can follow him on Twitter at @cshepard_ENT.