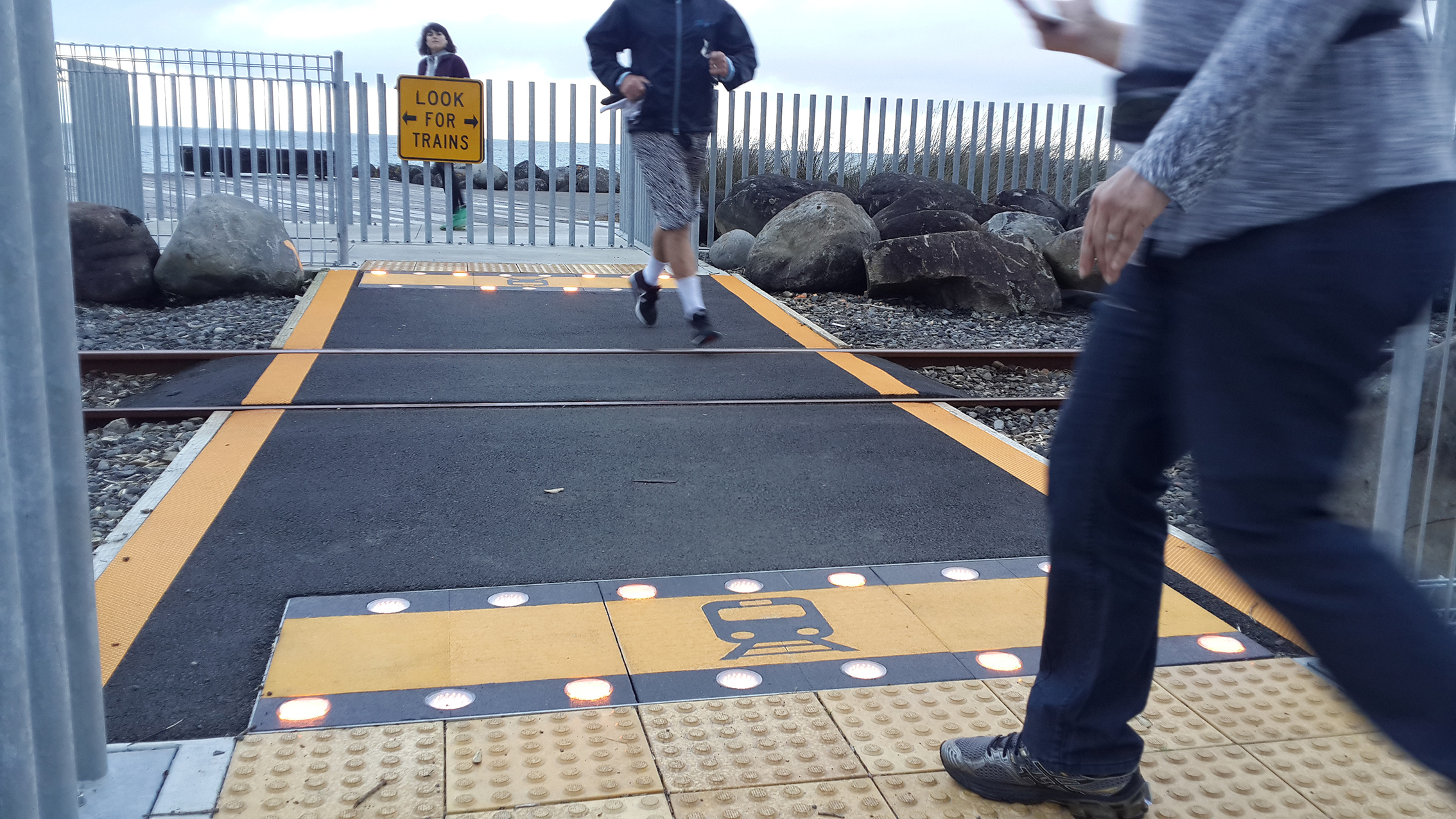 The Brisbane study was the first of its type to evaluate whether or not flashing LED lights at ground level actually caught the attention of pedestrians looking down at their phones.

“There are now growing concerns about ‘distracted walking’, particularly pedestrian distraction from looking down at mobile phones,” he said.

Dr Larue said some jurisdictions were now trialling footpath warning lights at busy intersections including cities in the Netherlands, Germany, Singapore and New Zealand, and also Sydney and Melbourne in Australia.

But he said it was not known how effective the LED technique was in actually capturing the attention of distracted walkers.

To find out, researchers from QUT’s Centre for Accident Research and Road Safety-Queensland (CARRS-Q) brought 24 people (aged 20 to 43) into their Brisbane labs to assess their behaviour while using a phone.

They were fitted with eye trackers, handed a phone with a visually intensive task to perform, and asked to walk a ‘footpath’ with flashing ground-level LEDs (and some at eye level) and push a button whenever they noticed the lights.

“We also performed the same test with headphones and an auditory version of the task as listening to music and voices through headphones can also be distracting and reduces people’s ability to hear warnings,” he said.

Dr Larue said the study found that participants used their peripheral vision to detect the flashing lights at ground level while doing a distracting task on their phone.

“It’s only a tiny amount of time but it can be the difference between life and death if you are crossing the road,” he said.

“Ground level flashing lights were just as successful at catching their attention as face level lights are for people not on their phones.

“However, proximity is the key – the fastest response times happened when they were one metre from the lights.

“This is consistent with close-range peripheral vision and existing research that shows walkers tend to fixate on the ground around one or two steps ahead.”

Dr Larue said further research in the field was needed to see if the results were the same as in a laboratory setting.

Pedestrians who use a phone while walking might one day face the same fines as drivers on the phone.

Honolulu in Hawaii has passed a “Distracted Walking Law” and can now fine people who try to cross the street while looking at their phone.  A first offence costs US$15 but repeat offenders can be fined US$99.

Other safety initiatives aimed at pedestrians have included the Parisian Road Safety Authority’s “Virtual Crash Billboard” campaign in France that effectively demonstrated the potential dangers for pedestrians who didn’t pay attention at crossings.

The QUT study was funded by the Australasian Centre for Rail Innovation.  KiwiRail also provided extensive in-kind support for the in-ground LED equipped pedestrian level crossings used in the study.