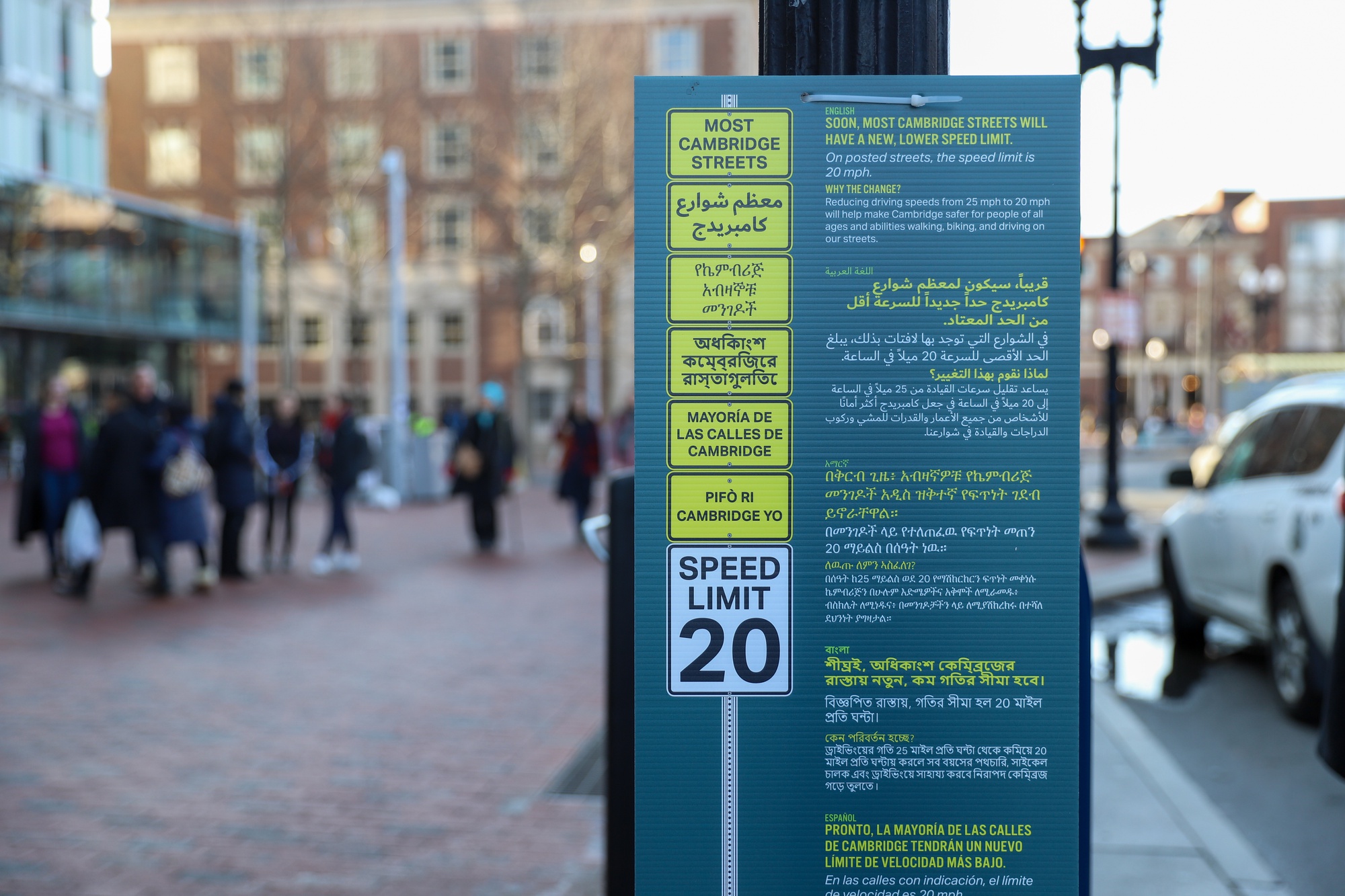 Cambridge has implemented new 20 mph speed limits under a safety program called Vision Zero, according to a banner the Cambridge Traffic, Parking, and Transportation Department hung at the intersection of JFK Street and Mt. Auburn Street Monday.

First implemented in Sweden in the 1990s and adopted by several American cities, Vision Zero is a plan to help municipalities reduce traffic fatalities and serious injuries to zero.

Joseph E. Barr, director of the Traffic, Parking, and Transportation Department, said Cambridge is participating in the strategy in order to treat road safety as a “public health issue” rather than treating traffic fatalities as a “cost of doing business.”

“We are actively working to eliminate fatalities and serious injuries from our transportation network,” he said. “If we set a goal to do anything other than zero, then what are we really saying about people safety and how important we consider keeping people safe to be?”

Cambridge’s Vision Zero plan is not limited to the lowering of its speed limits. Other steps outlined in the city’s “Vision Zero Action Plan” include to “design and operate safe streets” and to “engage the public.”

“There’s engineering, which is what you’re actually doing physically with the public space that you have available,” she said. “And then there is education, which can take many forms, but is a lot of public outreach and so forth about why it's important to do these things.”

“And then enforcement is, sort of, you’ve got the carrot and the stick. So, enforcement, obviously, can be challenging because police can’t be everywhere at once,” she added.

“It does work in tandem with the Complete Streets policy that was already part of the city’s approach to redesigning and reconstructing the streets and sidewalks to make them, what we call, multimodal,” Devereux said.

Patrick C. Braga, a Masters in Urban Planning student at the Harvard Graduate School of Design, said he hopes the lowering of the speed limit will be used as “justification for redesigning streets to be safer for all modes of travel.”

“It gives the city a bit of justification for pursuing design changes on streets that are currently too wide,” he said.

“Street design plays an important role in how comfortable somebody feels driving at different speed levels, so streets that are physically narrow or visually constrain fields of vision are known to encourage people to drive more slowly,” Braga said.

“One place, for instance, that is a challenge for safe driving is Harvard Square,” he added.

Barr said the town has generally been very supportive of the city’s efforts under Vision Zero.

“We’ve been lucky that everyone from our elected officials to our residents to our business community, generally, have been supportive of doing this and, if anything, have pushed us to do more in the future,” he said.

A previous version of this article incorrectly stated that City Councilor Jan Devereux cited a "concrete" policy. In fact, she cited the Complete Streets policy. —Staff writer Taylor C. Peterman can be reached at taylor.peterman@thecrimson.com. Follow her on Twitter @taylorcpeterman.