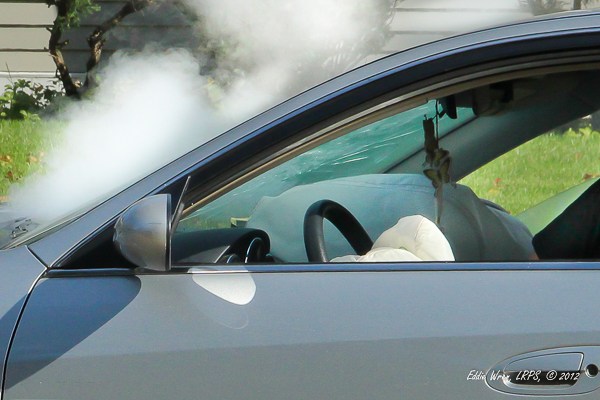 About 40 percent of all crashes in the USA involve one or more vehicles ramming into another vehicle from behind, and this is a major cause of bad injuries and deaths.

It is now almost 20 years since modern research proved that the average person is unalert at the wheel and doesn’t really expect anything to go wrong up ahead. That’s a polite way of saying that the vast majority of drivers are complacent and not concentrating on their driving.

It used to be believed that the average reaction time for a driver was around 0.66 of a second but several research establishments around the world have now proved that it is typically 1.33 to 1.5 seconds. And this makes major differences not only to stopping distances but also to minimum safe following distances.

It is the latter — safe following distances — that we will discuss in this article.

The first thing to mention is that the old rule about one car-length for every 10mph is CRAZY and was invented by someone with zero understanding of safe driving or physics. Forget that one for ever!

Effectively, there are two very different goals for following distances. The first of these assumes that the vehicle you are following will come to a stop as a result of the driver braking.

Such violent stops can also occur in multi-vehicle smashes, especially in poor visibility when people are driving too fast for the conditions.

So these events are much less common that the car ahead merely braking, but — as said — they are stunningly more dangerous. If the vehicle ahead of you has a violently-sudden stop, the gap that was your following distance has just become your available stopping distance, and it probably will not be enough… And unless your safe driving attitude and technique truly are above average, this means you are going to crash.

Let’s look at the commoner type of incident:

If you are following another vehicle on a clean, dry road surface, you need a minimum following distance of THREE seconds. This will give you the necessary 1.33 to 1.5 seconds reaction time and the ability to maintain a reasonable gap between you and the vehicle ahead while you both brake to a standstill. (Some organizations, such as the AAA, recommend a minimum gap of four seconds, and that’s fine — space is safety — but three seconds is sufficient.)

It is very important that you do maintain that gap while braking because there is quite possibly another driver following you, and if you don’t stop until you are close to the now stationary vehicle ahead of you, it is very likely that you will get slammed into it by the guy behind. You would then be in serious danger of being badly hurt, or worse, and it would also probably be impossible to prove to your insurance providers that you weren’t at fault for hitting the vehicle in front.

But there’s more! By being able to slow down a bit more gradually you also reduce the risk of being hit from behind while you do so…. It’s very much a WIN-WIN!

If you are on a road where it is possible, simply possible, that the vehicle you are following might be in a head-on or a T-bone collision (or a multi-vehicle smash on a highway) then drop back another couple of seconds and you will have made yourself much safer still.

Here’s another thing: It really doesn’t matter if someone passes you and ‘steals’ some of your following distance. All you need do is ease off the gas for a moment and re-build your safety gap. Our goal is to maintain maximum safety, not to play ‘Whacky Races’ with anyone who passes you!

In his book ‘Traffic Safety’, the former GM chief safety engineer Leonard Evans calculated that even on a long trip, if you rigorously maintained a safe following distance and dropped back when you were passed by someone else, you would likely be no more than a minute late at your destination. So which is more important? Sixty seconds, or your life?

Everybody that attends one of our corporate, defensive or advanced driving courses at Advanced Drivers of North America [ADoNA] is taught this incredibly important safety technique, including how to reliably adjust it for bad weather and other road surface conditions. Contact us to discuss courses for your corporate drivers or chauffeurs.

As always, please be aware that this website is registered with the United States Copyright Office and that punitive legal action for damages may be taken against anyone who breaches our copyright. This, however, does not stop you from posting links to any of our pages, and you are welcome to do so.