When It Comes To Distracted Driving, State Laws Are Not Created Equal 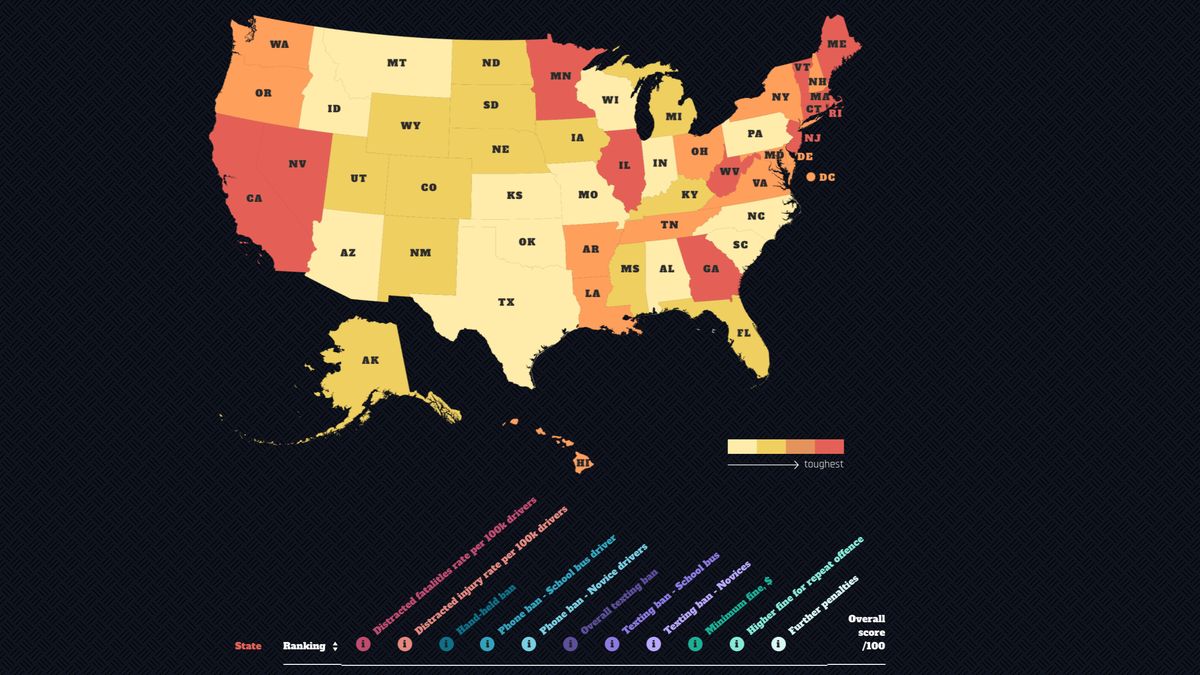 News of Covid-19 is sweeping the nation, but other serious threats to safety remain.Distracted driving, for example, claimed the lives of  2,841 people in the United States in 2018. Among those killed: 1,730 drivers, 605 passengers, 400 pedestrians and 77 bicyclists, according to theNational Highway Traffic Safety Administration.

“Distracted driving is dangerous,” the federal agency said. “Texting is the most alarming distraction. Sending or reading a text takes your eyes off the road for 5 seconds. At 55 mph, that’s like driving the length of an entire football field with your eyes closed.”

Many safety organizations, including theNational Safety Council, say we don’t really know how dangerousdistracted drivingis because crashes are often underreported. “Unfortunately, no breathalyzer-like test exists for cell phone use behind the wheel and drivers in crashes are often reluctant to admit use.”

Distracted Driving Awareness Month, held each April, has been temporarily suspended due to the current coronavirus pandemic, the nonprofit advocacy group said. However,two new studies released in advance of the previously scheduled observance shed light on how states are regulating and enforcing distracted driving.

The personal injury law firm ofSiegfried and Jensenconductedan analysisto understand how states nationwide have implemented laws to regulate distracted driving to reduce risks of crashes and to determine which states have the strictest and most lenient distracted driving laws. Each state was ranked based on 11 metrics related to its distracted driving crash statistics, legislation, and penalties.

The Risk Instituteat The Ohio State University surveyed more than 1,600 highway patrol, sheriffs, police officers and prosecutors across Ohio to understand how law enforcement professionals view the dangers of distracted driving in the state and how to mitigate the growing risk.

Here are some highlights from theanalysis:

“A primary violation law would allow an officer to stop and cite when they see someone looking down into their lap at a cell phone instead of waiting to see if that action also brings about a dangerous event that might cause someone their life,” one officer noted.

The survey, which was sponsored by the Ohio Department of Transportation and released in February, found that support was highest among officers with more experience.  Officers offered a variety of reasons why it is challenging to enforce Ohio’s current distracted driving laws, including the difficulty of proving offences, the fact that laws differ by jurisdiction, and too many exemptions.

“Phones allow for too many distractions that aren’t covered in the law,” a respondent indicated, citing an example of stopping a driver for speeding who was watching a music video on his phone, which was not included as a distraction under the law.

“On a typical day, more than 700 people are injured in distracted driving crashes,” the National Safety Council said. “Talking on a cell phone – even hands-free – or texting or programming an in-vehicle infotainment system diverts your attention away from driving. Keep yourself and others around you safe and #justdrive.