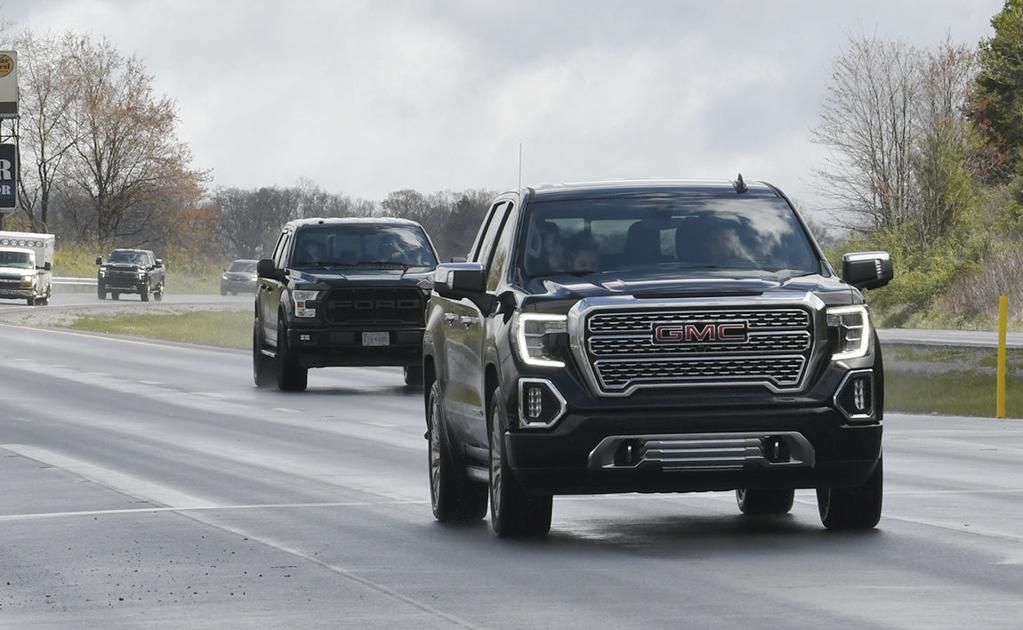 Traffic rates drop to half, motorists speeding more often
Motorists travel past the Locust Street exit in Princeton, Friday.
Staff photo by Eric DiNovo
PRINCETON — Monitoring a section of U.S. Route 460 for 24 hours showed less than half the usual traffic, but those fewer motorists are speeding and being reckless more often while the pandemic precautions continue.
The West Virginia Coalfields Highway Safety Program recently watched a section of Route 460 near Locust Street and took a sample of drivers’ behavior. That sampling revealed more speeding than usual.
“We conducted a 24-hour speed survey on U.S. 460 in Princeton on April 20 using a stationary data collection box,” said Sgt. A.M. Ballard of the Mercer County Sheriff’s Department, who works with the highway safety program. “Nearly 77 percent of vehicles were traveling above the posted speed limit and almost 20 percent were at reckless speeds. Other speed surveys conducted found that even on rural two-lane routes, over 50 percent of the vehicles are above posted speed limits.”
The collection box, which resembles a telephone box, is strapped to a telephone pole near the highway, Ballard said. It uses radar to monitor the numbers of passing vehicles and their speed.
“It’s a little bit of an increase in overall speed,” he said of the results. “Usually 60 percent above the speed limit; anything above the posted speed limit is considered speeding in the survey.”
The speed limit where the survey was taken is 55 mph, but some drivers exceeded it greatly. The highest clocked speed was 105 mph, Ballard said.
“There were several that were above 70 mph,” he added. “That’s in the reckless range.”
Increases in speeding and reckless driving isn’t unique to Mercer County.
“I think this is a nationwide stigma,” Ballard said. “Even though there’s less traffic, there’s a lot more reckless driving, aggressive driving and speeding.”
Mercer County’s has not see an increase in crashes and fatalities, but the fatality rate across West Virginia has increased since stay-at-home orders went into place.
“I think it’s a combination of being pent up at home and the frustration and being limited on where you can go,” Ballard stated.
A little more than 9,000 vehicles were counted when traffic was monitored on April 20. On an average day, that section of Route 460 sees about 20,000 vehicles in 24 hours, he recalled.
With fewer vehicles on the roads, drivers are less cognizant about what’s happening around them. When more drivers are on the highways and they’re driving responsibly, the highways are “not a free for all,” Ballard stated. “On the open road, it’s like a racetrack almost.”
Ballard said motorists are being urged to slow down and remember to drive responsibly.
“Saving lives and making our roadways safer are crucial components of the WV Coalfields Highway Safety Program’s mission. The program is partnering with local law enforcement agencies to share the message of staying safe while driving,” he said. “Our first responders are always on the job and will be there to answer the call when need be, but they should also not be exposed to dangers that could have been prevented – like vehicle crashes.”
“According to recent crashes and fatalities along West Virginia roadways, speed, and distracted driving, are the biggest concerns facing us on when traveling during this pandemic,” Ballard stated.
Drivers were asked to keep in mind the following advice and recommendations to keep essential travel safe travel during this time:
• Maintain the speed limit of the roadway being traveled.
• Extend the distance between other vehicles and yourself on the roadway.
• Put the phone down while driving and focus on driving.
• Distraction can come from other methods, so make sure to focus on the task at hand. Take a moment to breath and relax before starting the vehicle to drive.
“Remember these safety tips, so we can all come together like we have for COVID-19 to save each other’s lives. We are practicing good hygiene to stay alive right now – we should also be practicing safe driving for the same reason,” Ballard said.
— Contact Greg Jordan at gjordan@bdtonline.com
Tags