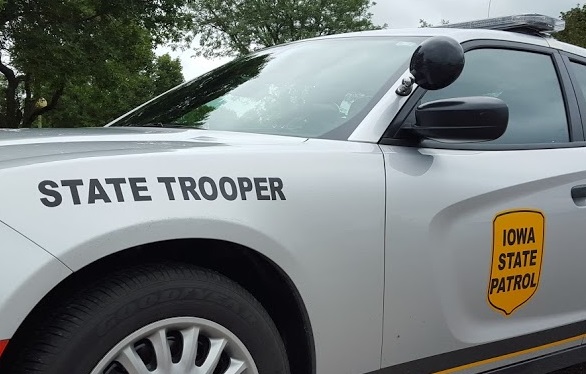 Northwest Iowa — With warm weather, as well as the reopening of many places closed down by precautions designed to halt the spread of the coronavirus, more and more drivers are taking to area highways and byways. And the heavier the traffic, the more danger distracted driving presents.

Kevin Krull is a Trooper with the Iowa State Patrol, and he says driver distractions can come in many forms….such as food and drink.

(As above) “As you pick up that coffee cup, or that Big Gulp, or whatever you’re drinking, you know that can obstruct your view or take your eyes away from the road, and your thoughts. Maybe you’re trying to eat that burger, or that whatever you’re eating, going down the road that drops and you reach for it. Those are all things to take your mind and eyes away from the road.”

(As above) “Today’s day and age we have a lot of things going on in the world, and we’re thinking of a lot of different things and sometimes it gives us a little bit too distracted. We’re thinking what we got going on in the day of the week or just whatever it is in general, and you end up not paying attention enough and you put yourself on autopilot.”

Krull gives an example of why it’s important to keep your head in the game while driving.

(As above) “I stopped a guy here not too long ago, he blew a stop light. And when I talk to about the violation, he readily admitted that he didn’t even see the light, didn’t realize that he gone through it. His reaction was shock and he told me flat out that he was thinking of all the things get going on that day.”

He says your car radio can be a distraction, as well.

(As above) “Those things can distract us, and it’s nice to listen the radio. I love listening to radio, music, news and all that stuff, but we need to make sure that we don’t get too wrapped up in what’s going on on that avenue to distract us from what we need to be doing primarily, which is driving and driving safely.”

When we think of distracted driving, normally the first thing we think of is cell phones, and texting while driving. While it is illegal to text while driving, the Trooper says even talking on the phone could have disastrous consequences.

(As above) “Unfortunately, I’ve been to fatalities before, and quite recently actually, where the individual was just simply putting the phone down in the cup holder. They were done with the phone call and they were just putting it back in. They took their eyes off the road and as they moved and shifted their body, it caused them to go across the center line and hit the other vehicle almost head on. This is too much of a common occurrence, and it needs to stop.”

Bottom line, Trooper Krull says, is that you need to make sure you’re a good, defensive driver and pay attention to your surroundings every time you get behind the wheel.