Fatal Distraction: The Dangers When our Eyes Aren’t Faithful to the Road 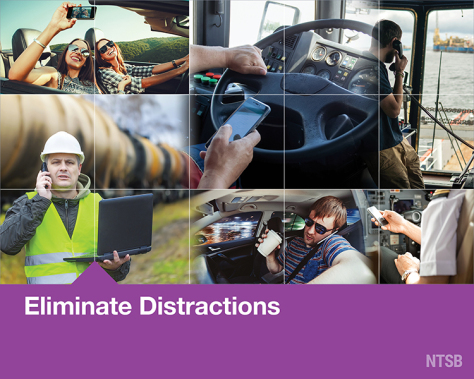 In my senior year of college I worked part-time as a “hot walker” for a trainer at a racehorse track. One afternoon, a coworker asked if I wanted to leave for lunch and grab a sandwich at a local deli. The last thing I remember before the accident was getting in her car, pulling the shoulder strap of the seat belt across me, and realizing that the buckle attachment was missing. I remember being worried; it was snowing, but somehow, I rationalized that I’d be fine because we were only going a few miles down a rural road where few cars traveled.

The next thing I remember is waking up in an ambulance and, soon after, arriving at a hospital, where a team of medical professionals were focused on the large, deep gash across the top of my head (and later, a concussion), which apparently occurred when I hit the windshield. These are injuries I never would’ve sustained had I been wearing a seat belt. My most vivid memory from that afternoon was the priest who worked his way between the medical staff to ask who he could contact on my behalf. While writing this blog, I asked my parents about that phone call. As the parent of a tween now, I can’t imagine how devastating it must have been to get a call about their child being involved in a major car crash and needing to get to a hospital that was two states away.

As for my coworker who was wearing a seat belt—she broke her arm when she threw it between me and the dashboard during the accident. Fortunately, the woman who hit us suffered only minor injuries. I found out later that she had taken her eyes off the road to pick up a wallet that fell on the floor of the passenger side of her car. She veered into our lane and hit us head on.

Distractions like the one that resulted in my accident aren’t new, but nearly 30 years later, as we’ve become more connected, our behavior toward them has gotten far worse. The technological advancements over the past couple of decades, in many ways, have improved and enriched our daily lives. Think of all the things we can do that were unimaginable in a pre-smartphone world: we no longer have to drive to the bank to cash a check, wait in line for coffee, or even visit the grocery store. With our time yielded back, we spend endless hours staying connected to others by text or video chats, or by browsing social media—to the point where we (particularly young people) become addicted to our devices.

So, why is this a problem on our roadways? Distractions like eating, reading, shaving, and picking up a wallet while driving are now compounded by our urge to respond to a barrage of phone calls, texts, and alerts on our smartphones—devices that are, in fact, designed to capture our attention. And, not surprisingly, research shows that humans aren’t good at multitasking. As a result, people are dying. According to the National Highway Traffic Safety Administration, distracted-driving crashes killed 2,841 people in 2018, including 400 pedestrians and 77 bicyclists who are particularly vulnerable because they don’t stand much of a chance when colliding with a 4,000-pound vehicle.

“Eliminating Distractions” has been on the NTSB’s Most Wanted List of transportation safety improvements since 2013, and it isn’t going anywhere until we see a significant reduction in distracted-driving-related fatalities. States also recognize the problem; some have banned the use of handheld devices altogether, while others have at least banned texting while driving. Short of full cellphone bans, though, drivers can still make calls on speaker, which only results in cognitive distraction.

I think we all forget how big a responsibility operating a vehicle is and the potential harm that can be caused to us, our loved ones, and others when we allow ourselves to become distracted. Please, let’s all remember that we must remain vigilant while driving. Safe driving requires 100% of a driver’s attention, 100% of the time, so put down the phone or the bagel or the makeup. Let the wallet stay on the floor until you’re parked. No distraction is worth a human life.