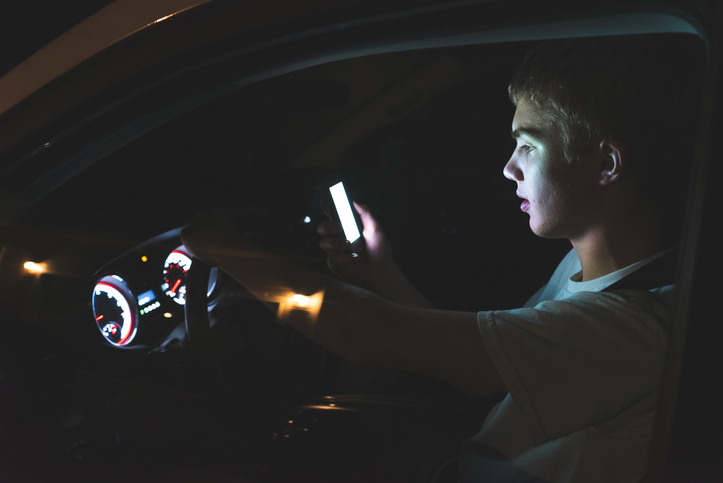 New research is revealing the underlying factors behind distracted driving, and delivering the brain-hacking solution.

You’re on the road, and you were going to turn on ‘do not disturb’ on your mobile, but didn’t quite get around to it. Now all of those notifications are distracting you from the task of driving, putting you at a much greater risk of crashing.

Distracted driving has become such a serious problem on Australia’s roads some are calling it the ‘new drink driving’. For example, South Australian Police recently identified distraction as a factor in more than half of road deaths and ‘inattention’ in one third of fatalities over the last decade. Mobile phone detection cameras are now in place in NSW, with disturbing early results, and trials have started in Queensland and Victoria.

Now new research has shed light on the complex interplay of factors that influence how, when and why we use our smartphones in different driving scenarios. Crucially, we now also know how distracted driving compares with other risky driving behaviours.

“It’s not as simple as calling it ‘phone addiction’,” says Dr Kate O’Donnell, Research Manager at the Australian Automobile Association (AAA), “and the solution is not going to be as simple as telling people to just put their phones away.”

“This is one of the first studies to look at all the new ways we are using our phones while driving, beyond just calling and texting, and the factors that significantly influence that use.”

To dive deeper, the researchers started by interviewing 30 young drivers. They followed this up with two online surveys, a week apart, receiving responses from almost 1300 participants across Australia and New Zealand. They also surveyed 32 international road safety experts in 13 countries working in universities, the government, public and not-for-profit sectors.

What they found, first of all, was that Australians don’t switch off behind the wheel. While the vast majority of people are trying to reduce their use, there is a big gap between what we think works and what we actually do. For instance, very few people report turning off their phone when driving, despite most thinking it’s an effective way to reduce their use.

For young Aussie drivers, the highest level of engagement was with entertainment apps, such as music and podcasts, and most types of phone use increase markedly when drivers are in stop-start traffic or stopped at traffic lights.

Dr O’Donnell says that, perhaps unsurprisingly, well-established calling and texting apps are the most common way more experienced drivers take risks with their phone in their hand.

“But the social media trap seems to capture both younger and experienced drivers, who engage with those apps at similar rates when they grab their phones,” she adds. “Interestingly, experienced drivers report a slightly higher use of social media in all types of traffic conditions. And younger drivers are three times more likely to use do not disturb mode than older drivers – this is not just a younger person problem.”

In fact, we now understand more clearly that there are different motivations for using our phones in the car. So there is no one size fits all approach to reducing smartphone use while driving.

Beyond the punitive stick, what is the solution?

The first step is to understand the risk. The researchers asked 32 international road safety experts to rate the likelihood of crashing due to four different types of driving distracted by a mobile phone against four other well-established risky behaviours – speeding, driving fatigued, drugged or at the legal alcohol limit.

“The experts rated holding a phone and looking at the screen for more than two seconds while driving as the behaviour most likely to increase the chance of a crash for younger drivers – by almost four times,” Dr O’Donnell says.

Taking the newfound insights, the Australian Automobile Association has applied the research to create a resource designed to break the nexus between young drivers’ motivations to use their smartphones while driving, and their actual use.

Drive in the moment is a new, online platform with a Risk Rater tool that demonstrates the risk of smartphone distraction when compared with other, well-established risky behaviours. Taking the quiz in the Risk Rater allows you to learn more and compare how you rate the risks against the experts.

You can then try the Plan Builder tool, which prompts you to build a bespoke plan to reduce smartphone use by helping to identify the various ways and moments in which you are tempted to use a phone. The tool will then ask you to develop a tailored ‘mental plan’ of how to better respond, manage relapses and re-enforce positive behaviour.

“Research done in the UK has shown that using ‘If-Then’ plans helped young drivers reduce their smartphone use while driving,” Dr O’Donnell explains. “These responses might be mental, like thinking about wanting to keep friends and family safe. Or they can be physical, like reminding yourself to keep your hands on the wheel or putting the phone away out of reach.”

Because we all use our phones differently and for different reasons, each plan needs to be unique to be effective.

“The good news is we can see from the research people are trying to reduce their use, and we hope this new approach is one way that can help those who want to change their behaviour,” says Dr O’Donnell.

“We want Australians to aspire to be better, safer drivers, who take less risks on the road. Have a plan, ditch the distractions, and drive in the moment.”

This article has been republished by AfMA with permission from the Australian Automobile Association.