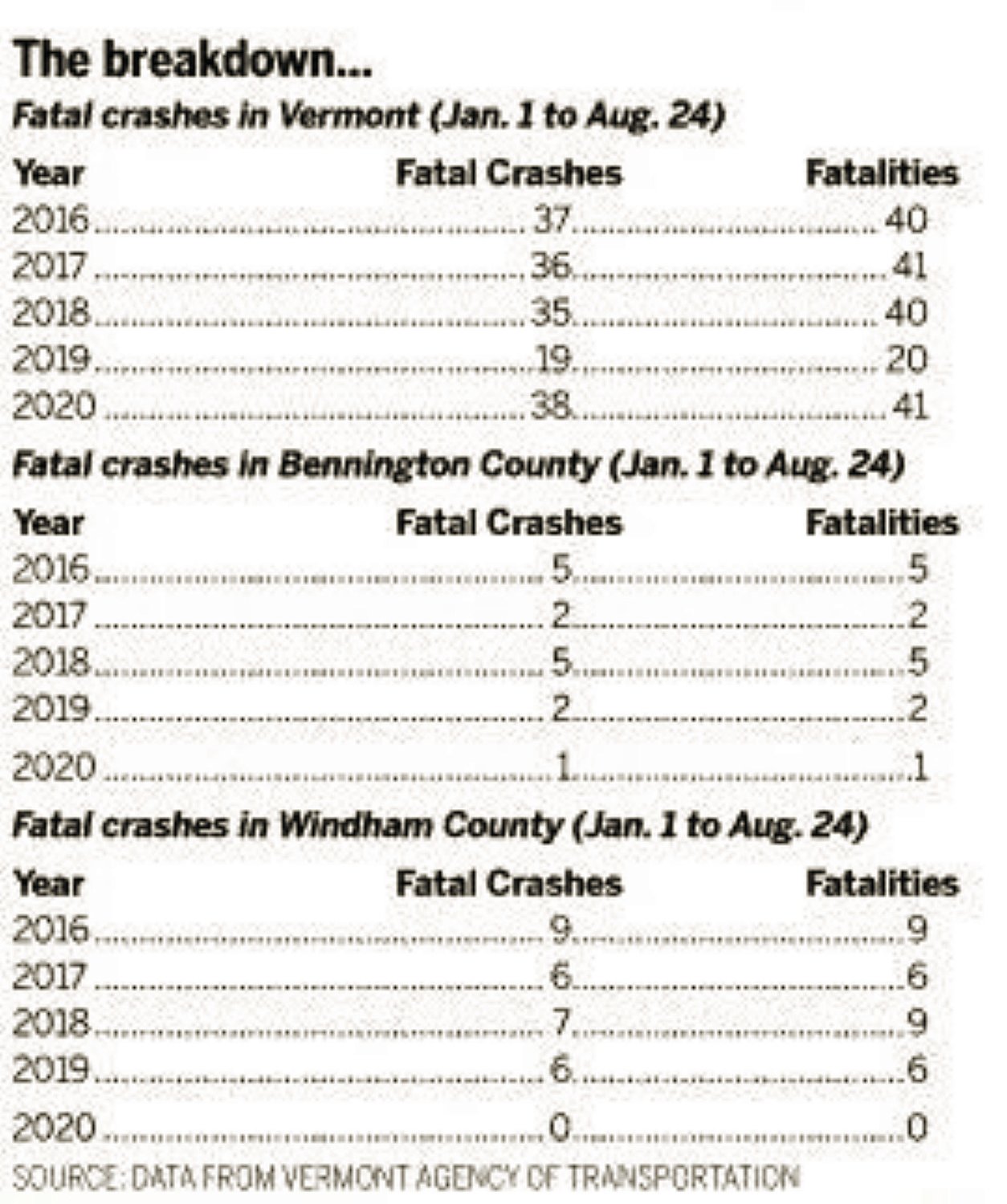 BARRE — Since the coronavirus pandemic began, fewer people are driving yet fatal crashes are still happening as often as in normal times.

After Gov. Phil Scott issued a stay-at-home order in late March, the number of vehicles on the road plunged, according to data from the Vermont Agency of Transportation.

During the period that the majority of people sheltered in place — April 1 to May 15 — traffic volumes statewide fell to about half those of 2019, said VTrans data unit manager Mandy White.

With travel restrictions having been relaxed, the roads are gradually seeing more motorists. But the numbers are still below the norm. This week, traffic volumes are up to just 82 percent of the volumes within same period last year.

The number of fatal crashes, however, remain at the same level.

Since the New Year till Aug. 24, some 41 people have died in car crashes statewide. They include a Londonderry woman who was killed in a collision last month.

From 2016 to 2018, in comparison, there were around 40 deaths within the same period each year. (Last year, for unknown reasons, the fatality rate was halved.)

Vermont is apparently not the only state experiencing this trend: despite fewer vehicles on the road, the number of fatal crashes have either reflected the average or gone up. And authorities still don't understand why.

"A lot of states are experiencing this issue," said White, whose unit oversees crash and traffic volume data. "We don't know for sure, but many feel it's the freedom of the open road and the perceived lack of enforcement that are causing motorists to travel at faster rates."

State and local police have repeatedly said they continue to patrol roadways while taking the necessary health precautions in light of the pandemic.

Data also shows that most fatal crashes in Vermont happen in rural roads rather than interstates or state highways, according to Vermont State Police.

"I wish we could figure it out," said Lt. Tara Thomas, commander of the VSP's safety programs unit. "I wish we knew what the formula was to keep our fatals down, because it's certainly something we would strive for every year."

But the major factors that contribute to fatal crashes are well established and can serve as a warning to motorists. They include driving while impaired by alcohol, drugs or other chemicals as well as speeding, aggressive driving, not wearing a seat belt and distracted driving.

Thomas said distracted driving is not just about being on a mobile device but also eating while driving, having pets bouncing around the vehicle or being engrossed in a conversation with a passenger.

"All these things contribute to our fatalities every year yet we're still seeing the same issue year after year," she said.