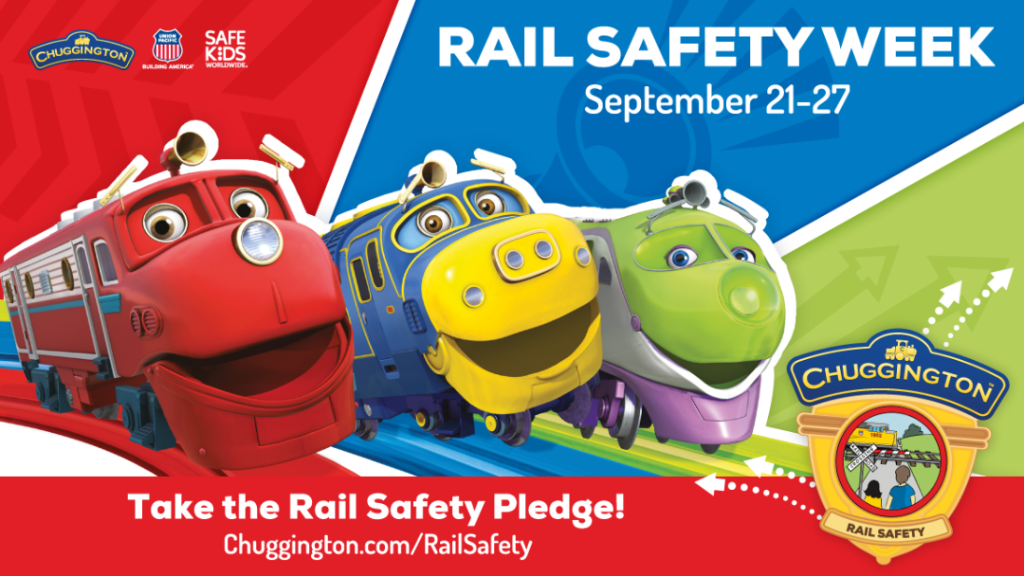 Meet Wilson, Koko and Brewster, the stars of "Chuggington: Tales from the Rails," an animated series on Disney Junior and DisneyNOW. The train engines known as "Chuggers" are celebrating National Rail Safety Week, Sept. 21-27, spreading awareness about rail safety to preschoolers and elementary students, their parents and teachers through a new partnership with Herschend Entertainment Studios (HES), the franchise’s owner, Union Pacific and Safe Kids Worldwide. It’s a collaboration the Chuggers would definitely call, "Traintastic!"

"The world of Chuggington has been engaging and entertaining children for more than 10 years, and it’s an honor that our young trainee trains will now lead this new program to teach important rail safety tips in a fun and engaging way, while reinforcing caring, kindness and togetherness," said HES Vice President Commercial, Content Distribution and Licensing Natalie Setton.

The safety campaign, which includes a new video featuring the Chuggers, is designed to teach families three important lessons:

After watching the video, children and adults are asked to take the Rail Safety Pledge at chuggington.com/railsafety, and then print and proudly display their Rail Safety Certificate.

"Every five days a child is killed in a train collision and all of these tragedies are preventable," said Safe Kids Worldwide President Torine Creppy. "Kids learn better when they’re having fun, which makes the world of Chuggington the perfect place to teach important rail safety tips, such as not playing on or around train tracks, and crossing the tracks only at places marked by a crossbuck, light or gate."

Safe Kids Worldwide, a nonprofit organization working to prevent childhood injury, and Union Pacific have worked together since 2018 through the railroad’s Community Ties Giving Program, using research-based education and messaging to reduce behaviors that lead to rail-related incidents. In 2019, 55% of Union Pacific’s crossing incidents occurred at crossings with active warning devices, and investigations reveal risky or distracted driving was the cause.

"Exposing young students to safety messages from beloved characters puts them in a position to be safety ambassadors for their parents and more careful drivers in the future," said Union Pacific Assistant Vice President and Chief Safety Officer Erin Batt. "This campaign also serves as a reminder for parents and teachers to set a positive example. Often, we hear ‘I’ve walked along these tracks since I was a kid.’ While that may be true, it’s still trespassing, and it’s dangerous."

"Every parent with young students is familiar with the nightly routine of signing a homework sheet," Batt said. "By parents and students seeing these same reminders day in and day out, our goal is to embed these behaviors at a young age and, ultimately, create lifelong habits that are as ingrained as looking both ways before crossing the street."

Free, downloadable activity sheets, as well as classroom posters and bulletin board décor are also available at chuggington.com/railsafety.