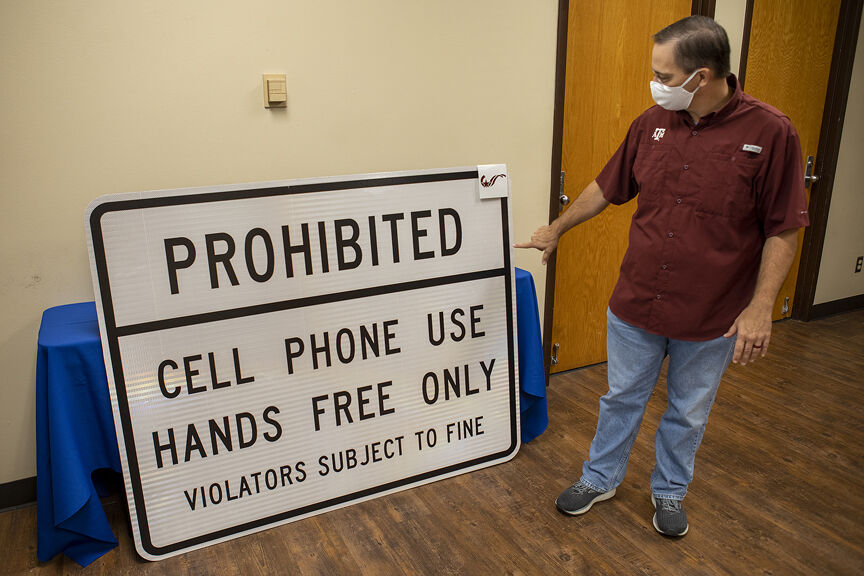 Signs will remind drivers of College Station's hands-free ordinance
Signs will remind drivers of College Station's hands-free ordinance
By MEGAN RODRIGUEZ
Please subscribe to keep reading. You can cancel at any time.
Already a subscriber?
Thanks for reading! Log in to continue.
Enjoy more articles by logging in or creating a free account. No credit card required.
{{featured_button_text}}
Troy Rother points out features of a new hands-free sign at College Station Public Works on Friday, Sept. 25, 2020. The city plans to have signs installed by the end of next week. When the signs are posted, College Station police will give warnings for violations for 30 days. After this time period, citations can be issued.
Michael Miller/The Eagle
Save
Thirty-three signs will soon mark entrances to College Station, reminding people of the city’s hands-free ordinance that the council approved in February .
The new College Station ordinance operates similarly to the state texting law. It prohibits holding the phone to talk while still permitting people the same affirmative defenses the state allows for texting, such as emergency calls, GPS use, changing music and using a device while at a complete stop.
When the sign installation is completed this week, police officers will be permitted to pull over drivers who are disobeying the rules. For 30 days, the officers will only give people warnings; then they will be permitted to issue citations that could range from $25 to $500.
“We hope and believe this new ordinance will help to reduce the numbers of violent crashes, injuries, and deaths which occur on our community’s roadways,” College Station Police Department spokesman Officer Tristen Lopez said. ”Distracted driving is deadly driving.”
Twenty-eight of the signs will be spread across state highways, U.S. highways and interstate highways that enter the city, as required by state law for a city to have a hands-free ordinance. Traffic Engineer Troy Rother said some of the signs will be placed at city-owned streets, such as Tarrow Street, Arrington Road and W.D. Fitch Parkway. Five signs address the frontage roads as people exit Texas 6.
The signs cost the city just over $28,000.
In August 2016, College Station adopted an ordinance prohibiting the use of wireless communication devices while operating a motor vehicle. It went into effect in November 2016, and full enforcement began in January 2017.
At the end of September 2017, the council formally repealed the ordinance because it was stricter than — and therefore it conflicted with — the statewide texting ban law that went into effect Sept. 1, 2017. The state law currently in effect prohibits the reading, writing or sending of electronic messages unless at a complete stop but allows drivers to use their GPS, text in an emergency or use a device for music. Any ordinance that a Texas city puts in place cannot conflict with the state law.
While the city ordinance operates similarly to the state law, there are some differences. One of the most major, an official pointed out in a February council meeting, is that bicyclists are also required to follow the ordinance.
The city’s ordinance was set to be enforced sooner, according to a city blog post, but health and budgetary impacts of the COVID-19 pandemic delayed progress.
“When it became obvious that drastic changes and impacts were in store due to COVID-19, all city departments were instructed to halt non-essential spending,” Office of Public Communications Director Jay Socol said. “Production and installation of those signs were deemed non-essential at that time.”
The signs being used to enforce the ordinance are new. The ones that the city used for the previous ordinance were recycled after the regulation was repealed.
Research presented at a January city council meeting showed that wireless communication device use dropped when the city had its ordinance, but usage has been on the rise since the ordinance was repealed.
When council members initially adopted the soon-to-be-enforced ordinance, they emphasized it as a way to discourage people from using devices.
At the January meeting, Mayor Karl Mooney expressed concern about how police officers could enforce an ordinance, but ultimately said he was interested in the idea of an ordinance if it could reduce the number of distracted drivers.
“I believe that with the numbers that we saw, the ordinance itself serves as a deterrent, and the signs themselves would serve as a deterrent,” Mooney said at the January meeting. “If we can reduce the number of folks who will without hesitation pick up their phone … that might be worth it right there.”